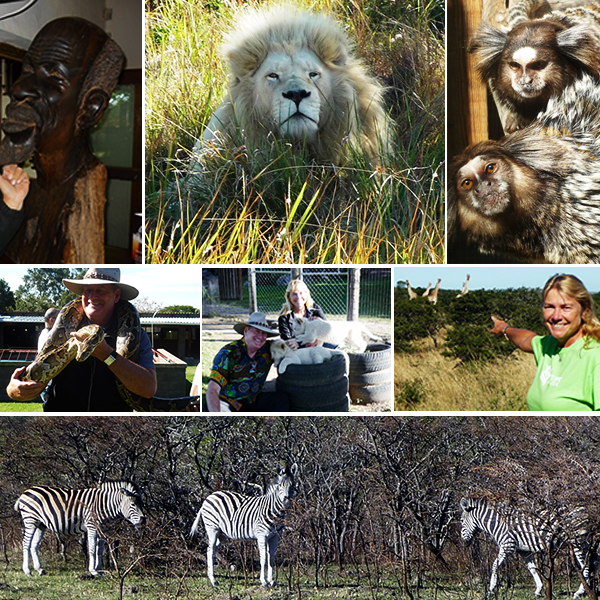 When I lived in the Netherlands I used to “hop on the bikes” with the kids and “peddle” to the countryside so we could enjoy the birds, cows and horses. The dikes and the wide open spaces with the wind going through your hair was a favourite of us. We used to spend many hours at the beach to collect all sorts of little creatures and shells. At home, I had to check my daughter’s pants before throwing them in the wash because she used to collect worms etc and shove them into her pockets. Many worms I saved this way to the great dislike of my daughter because “she wanted to keep them”. I told her it was too warm indoors for worms and I put them back outside so they could live a long healthy “worm life”. You can see that I have always been attracted to all animals and loved to make sure they were ok.

Coming to South Africa was a big thing for Greg and I because we love all the animals in the wild and it was a big dream of us to go on safari. The first “game park” we went to was’ MPongo’, a fabulous park set up for tourists to go in and enjoy the environment in the enclosure of your own car. The entrance of the park was stunning with a beautiful hall and an inviting restaurant. Because it was out of season there were no other tourists there and we had the place to ourselves. The driveway started and the rules were out there on the signs. Do not leave your car and do not feed the animals, it stated. Not that it is an option that you leave your car with lions and Rhino’s walking around, but anyway, you’d never know. Maybe that’s why some people call the park “game parks” so the animals can play a game with us? Ok, ok, back to the serious matters now.

The first animals we spotted were the Springboks, a very common animal in South Africa. With their horns pointing to the sky they look very majestic and when they run and hop you just hold your breath, like animal Ballerinas they go - and fast as the wind as well. We drove along the narrow road and entered a beautiful area with mountains at the back with hills covered in long grass, green grass, not yellow like home. A great stack of ostriches slowly moved across the planes, in the distance, we spotted about ten zebras accompanied by some springboks, wow, what a way to start this tour. We went over some small hills and into an area with a lot of trees and we couldn't believe our eyes. A group of giraffes look up from their daily dinner and seemed to say, 'ok, you can have a good look, we are not going anywhere'. We turned off the engine of the car and just sat there admiring the huge animals. I never realised how tall their necks were and I asked Greg whether they would suffer from Arthritis when they got older. We had a good laugh about that. Because we were tourists and couldn’t help ourselves, we looked around and when the coast was clear we got out of the car to take some pictures. I must say it is an amazing feeling to be part of this environment. After a good ten minutes, we left the giraffes and headed on our way again. Many different animals came and visited us on this day, and we had the bug for exploring even more.

The next stop we had was the Apex Snake Park just outside Gonubie. We had visited this park some days before and started talking to the manager there. When he found out that Greg was a snake catcher at home, and I catch the spiders, he invited us to do a presentation for the tourists and today was this day. Never a dull moment with the Keyes, right?

The manager and the main snake handler did his talk first and showed many different snakes, and how to handle them. He knew to be very careful as he had been bitten a few times and he lost a part of his hand to show for it! After all the African snakes it was Greg’s turn to talk about the Aussie ones. Well, Greg loves talking and it was a great moment to see all the smiles coming out, and the Ah’s and Oh’s were everywhere. Many pictures were taken with the snakes and everyone learned a lot about the slippery animals including how to find the sex of the animal. I will not go into detail but fascinating it certainly was.

Rose had another surprise in store for us and the next day we went to Mdantsane, a Huge game park. This was the real deal, a guide took us in a safari truck around the property, as big as the state Victoria! Greg couldn’t help himself and did a great impersonation of Harrison Ford in Raiders of the Lost Arc. When the real guide took over we went on our way. He told us we would be lucky to spot animals because it is daytime and a lot of them would be asleep, so we had to be right awake to spot them. The first animal that literally dropped in was a big ostrich and when we stopped the open vehicle the ostrich decided it was time to check us out. He stuck his head in and started to nibble on the covers of the seat. The guide told us to sit still and hold on to your belongings so the ostrich doesn’t get a scare. The animal was not in for pickpocketing so he left us alone after a while. We wanted to spot some lions in the wild, but that was easier said than done. The guide drove us around for quite a while and we saw many zebras, springboks, ostriches and other animals, but so far no lions. Some scrubs on the left side moved in the wind and YES! I saw something sticking up above the grass. We made a huge circle and came back to approach from the other side and here he was, The Lion King, a huge animal resting in the sun and his family close by under a trees. Immediately I had to think about Daktari on TV with Clarence the cross-eyed lion, but this masterpiece was nothing like him! The camera’s were clicking away and after a while we drove on to see what else was out there. Ten minutes later the guide spotted a Rhinoceros, and to our disbelief, a little one crossing the road with mum Rhino. This little one would have weighed at least 600 kilo’s but he looked little compared to mum and dad. Wow, this was better than anything I had ever seen.

As we were going for a few hours now it was time to head back. The safari truck took us four wheel driving, up and down, through narrow driveways with monkeys and other animals watching us, back to creeks and at one time we went down so steeply that I thought we might drop out. But as I am writing the story now I guess you realise that we survived.

Rose, Greg and I were very excited with what we saw and knew we had some great stories to tell - and photo’s to show our family and friends. We agreed that if we want to see more maybe next time we would have to do Kruger Park, which is even bigger and a new challenge.

It was five more days left in South Africa before home called out for us again. We decided to go to the local lions' park and Rose was our guide, as always. It was different to see the animals in enclosures after seeing them in the wild. The most gorgeous little lion cubs looked at us and wanted to be cuddled. It was possible to go in the enclosure with the lion keeper and we spent some time cuddling and laughing with the little ones. They are like big cats but a lot stronger and their teeth are more impressive, I must say. The cheetah was next. It was a bit scary to go in with a big animal like the cheetah but the keeper said she was "like a pussy", well I hope the cheetah knows what a "pussy" is. But it behaved very well and didn’t fuss at all. I guess we were meant to live another day! We walked around the lion park and enjoyed the animals and the sunshine once more.

Lilydale Farm was next on the list. A private farm with truckloads of smaller animals, birds in all sorts of beautiful colours, ducks, turtles, big and very small, hedgehogs, but one of the most amazing kind of animals were the Black Rainforest Monkey from Brazil. They looked like something from the theatre show, Cats. Very inquisitive and fast as lightning. They would sit very still like statues and then....pfff! Away they go. Beautiful little creatures. The best thing about this farm is that it is an educational one so anyone that comes in will learn heaps about a lot of animals. Schools often go in to learn about the non-African animals, so well done to Lilydale farm.

There is a time to start and there is a time to say goodbye and our time to say goodbye to South Africa was now. Rose and Rob and all our new friends had come. We enjoyed our time immensely and we will never forget the time we spent in this country and it inhabitants. Hopefully, one day we will return and we can do it all over again. In the next few weeks after South Africa, Greg and I were travelling to France and Switzerland, so no rest for the wicked.

I hope you enjoyed this adventure of Aussie Footsteps, and hope to be back with more travel stories soon.