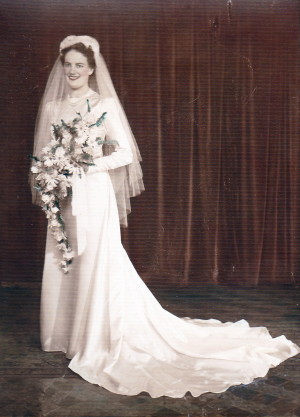 Whilst I was working at Corots (Salon in Bunbury) - I was only 16 - the manager at Collie had taken ill and I was sent over to Collie to manage a shop at 16 years of age for Mrs Larney. I stayed in one of the hotels there but of course only took my black suit and white blouse - which was the uniform to wear in those days. I did know…I had two friends (whose father was the Station Master in Collie), and I was very great friends with them, so I did know somebody, fortunately.

There was a big ‘ball’ on and they came across from where they lived - which was just across the road from the hotel - all dressed up in their finery and everything else…came over to try and talk me into going to this ball. I said, ‘I can’t go to any ball.’ I said, ‘I’ve only got what I stand up in,’ and that was my suit. They said, ‘Oh look that’ll be alright; tonight they are having a gallery that people can go and sit in and watch.’
I said, “Oh, no, no I couldn’t possibly go.”
‘We’re not taking ‘no’ for an answer.’
So they dragged me off to this ball and sat me up in the gallery.
During supper this young man came over to me and said, ‘Would you like to get up and dance?’ I said, ‘No I don’t dance thank you.’ So he walked away and about five minutes later his best friend came over and said, ‘Come on let’s get up and have a dance.’ I said, ‘I can’t get up and dance in these clothes.’ He said, ‘Oh that won’t be any problem.’ He dragged me up on the floor and we were dancing. By this time, my husband [to be], Arthur, he was playing the piano in the orchestra while the orchestra went and had supper. It’s a wonder that the piano didn’t burn to pieces the way he was glaring at me on the dance floor, because I had refused to dance with him yet I managed to get up and dance with his best friend.

The next evening, it was a Sunday, I’d gone across to (friends’) home and I’d gone over just to have a little bit of tea with them. Who should walk in the house but Arthur and his best friend! And of course the air was very cold: ‘Good evening,’ (being a very, very English young man at that stage), but the war fixed that, [after that] he certainly knew how to speak Australian! He mellowed through the night: I thought it was rather humorous. And then he walked me home across the road to the hotel.
So on the Friday night, it was late shopping night. He at that time was working as a blacksmith in the mines and they didn’t work in the evenings. It was just before 9 o’clock when I was just closing the shop and he arrived at the shop and he said: ‘Thought you might like to come and have a drink?’ And that was the start of our little romance.

So I finally took him home and introduced him to Mum and Dad and we just sort of kept up a friendship more or less, right through. And then it sort of bloomed quite a bit and then when the war came along…Oh then when I went to Perth of course he was still in Collie, but he was in the Reserve Army where they used to go training every so often. And if he was in Northam at camp he would always come down to Perth and see me - and as I said the romance bloomed. And he was a very, very nice young man; a thorough gentleman really. Then when the war broke out, (he was actually in the army or the reserve army), so he joined up in the forces.

Yes the 44th Battalion. They were mostly around in the South West until Japan came into it and then they were shifted up north and then they were sent over to the Eastern States. From there they went on up to the ‘islands’ they were at the landing at Balak Papan.
When they came back which I think was the 4th of January in 1946, he didn’t want to hang around and go through all the performances that they had to ‘go and do this and do that; get all their clothes and everything else’. He didn’t want to do any of that and being in the position as he was, he did a bit of shenanigan and got himself signed off in about two days. And then of course he was looking for work.

A friend of ours had a business in Inglewood and we went out to see them one day and Vic said, “If you’re looking for work you can come and give us a hand.” You know it was a family business. So Arthur started work there, and we went into a little boarding house just around the corner from the shop.
… six months later the family that had the business had a big bust up and we were offered the business; saying did we want to buy it? When we rang my Dad and said, “Well we haven’t got the money can you help out?” He just said yes. So with his help and a little bit of finance from him and a very, very co-operative bank account we managed to get into the business and we were there for seven years in Inglewood.

I went back to Bunbury and packed up the house and had what they would call now I suppose a ‘garage sale’. We had a big home and lots of lovely furniture but I had nowhere to put it, and Dad was living with some people in Bunbury. He was still working actually in the hotels but he was boarding with these people. He didn’t have anywhere to put anything, the house was sold and the people didn’t want the furniture that was in it. We had to store what we needed which was simply a bed, a table to sit at and eat at, and wardrobes and things like that: just necessary furniture. The rest of it we sold. I just advertised it in the paper and sold everything up then went to Perth to join Arthur at the boarding house.
Dad stayed on in Bunbury until such time that we went into the business and then he came to Perth and lived with us and helped us - not actually with the business but he was our backstop and did all the chores around the place. He was wonderful.

It was a mixed business in Inglewood on the corner of Waterford Road and Beaufort Street and we were right opposite the Civic Theatre. Of course we were open until 10 o’clock at night with the intervals and Saturday afternoons with the children’s matinees. In those days you couldn’t get chocolates: we were on rations for chocolates. So when we got our ration we’d put them all on one side and for the children’s matinees I used to make toffee apples. The kids used to come tearing across the road to get a toffee apple. But apart from that it was mostly ice creams and soft jelly lollies and things like that that we got in those days.

In Inglewood the business had a living quarters on it as well. We had an aerated water factory next door to us, but apart from that there were not a lot of houses down the street. Of course the trams were always running in those days and it was a fairly busy little corner actually.

Then we used to deliver orders: 265 orders a week we used to collect and deliver to all up around Morley Park and all up through there. I’d go and collect some of the orders and then I’d bring them home and we’d pack them. Everyone had their name on their boxes and then Arthur would take the truck out and deliver them. If they were small orders, I used to take the truck and deliver the orders. It wasn’t long after we’d sold the business, the supermarkets started to come into being. Thank goodness we sold it when we did!

One very amusing incident that happened when we were in the shop in Perth…As I said before, we had an aerated water factory next door to us and of course the aerated water factory always had aeons and aeons of rats and we had a big double garage and the rats nested in this big garage. We had our utility and Dad had his car in one section of it and they had nested all around his car (he hadn’t had it out for quite a while). They dragged the tarpaulin that he had over it, off the car and chewed it up and made nests everywhere.

This particular day he went in and found all this and of course the rats were running everywhere all the way up Beaufort Street. The chappie that used to bring our vegetables to the shop, he was there and Dad and myself - and there was a tram coming along. We were on a tram stop there and the tram stopped, and people got out of the tram and they were chasing these jolly rats up Beaufort Street! Pity we didn’t have a newspaper man there I think it would have been a wonderful photograph to have seen all these rats running everywhere and people chasing them. We set traps and poisons and things like that and finally we sort of got rid of them. But any business really, particularly where there are foodstuffs, I think you will find either mice or rats are always somewhere around the place.

We had a big wooden box which was an old tea box. It was about three foot high and about four foot wide; it was an enormous thing all lined with zinc. It was what they used to bring the tea over from India in on the ships. Mum and Dad had had it for years and years. In that I had packed all books and papers and photos and this was stored in this garage. The rats had dragged the tarpaulin off the car and they’d chewed a little hole in the lid of this particular box and they dragged the tarpaulin down through this hole and made nests inside in amongst the books and papers.
It was so sad because a lot of the stuff that they had chewed was absolutely useless; we just had to burn it. My brother’s diary which he had written and had been sent to us after he had been killed, that was all just chewed to pieces. It was a crying shame. A lot of our lovely photos and that had to be burnt because they were useless. The rats had had a real ball with them. These nests; these tiny little bodies floating all over the place.