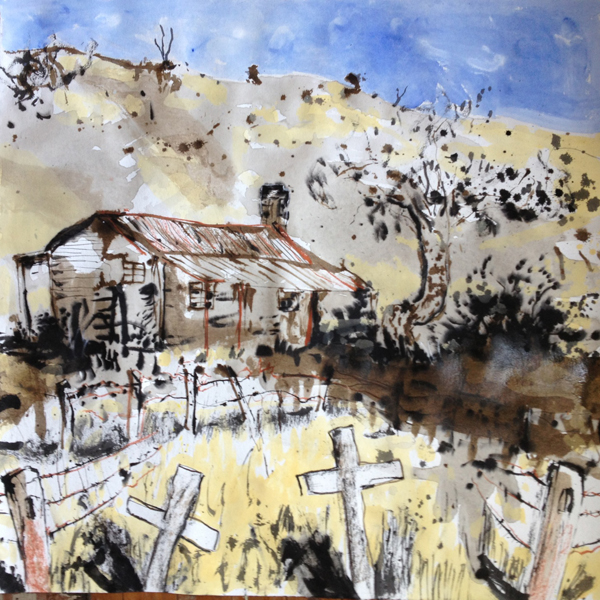 The day dawned still and sure
As the first day might have
Dawned. No wind whispered
Across the white dust. This
Was a day like any other. But
She knew it was not.

The woman had slept fitfully
Through the hot night. Her
Slumber the shallow sad
Unrest of one tormented by
Life, the unquiet of one
Who dreads the dawn,

The black and dire prospect
Of another day, another week,
Another year another moment,
Without rain. The terror, the monotony,
The pitiful lonely unremitting struggle
In a parched and dying world.

Outside her open window the moon
Grew fat and lovely. Her body stirred,
Physically longing for moisture as though
For love. The land, so exultant
When wet, be it rain, sleet, ice-rain, snow, or
Freezing damp winds, yearned also.

As was The Drover’s Wife of Australian folk lore,
The woman is alone on the farm. Her husband and father of the
Children, away months at a time, is shearing or
Fencing, working to hold his family together.
She inhales the aroma of dry earth and teases herself
Remembering diamonds of rain sparkling in trees.

Four years without rain. Four years of
Slow dry shrivelling of hope, of empty
Dams and dead stock and the curse
Of another ‘beautiful’ day. Her once
Full body and spirited soul have contracted
Into a hard cold core of madness.
That nature no longer cared, had never cared,
Fostered a demon depression which grew like a malignancy.
Without the grounding influence of the man,
Someone to shake sense into her, to dissuade her,
A dark, helpless sorrow flourished.

Her four children had slept the sleep
That only children sleep, the sleep
Of angels, their steady certain breath
Whispering to her through the thin walls
Of their starkly empty house, structuring
The silence she had come to dread.

She woke them one by one.
Starting with the oldest Jack, age 8.
She needed his steadiness with
The others. Rosie 6, Lily 4 ½,
And Joseph 3, were aroused
and dressed in order of their age.

The dog, sensing something,
Sniffed and ran around them
As though mustering a small flock.
This was a special day, a promised day,
A carefree day of fun and cake.
They were going on a picnic.

The children chattered, their bird-like
Voices chiming through the morning air.
Dressed in her best floral she applied lipstick.
Aged before her time, her pale gaunt face
Stared back in the mute surface
Of the mirror. the foolishness
Of the lipstick twisting her mouth into
A dissolute flash of crippled wit.

She combed her hair then returned to the kitchen.
The prepared picnic basket stood on the table
Beside the darkly gleaming cake.
She had emptied the remains of the water tank
Into a glass bottle, cooling it overnight,
Then added sweet cordial. Joseph will love this.
She thought.

The ordinariness of what she was doing
Made her almost happy. But there was
A diamond clarity about her actions.
A chilling certainty. She was running on empty,
pleasure was a conditioned response.
This was going to be, after all, a picnic.

Together this little band of men
Marched across the empty paddock
Lifting spools of dust where lush pasture
once lay, through gates left open because
There was no longer sheep or cattle
To hold in or hold out.

Stock sold too soon or too late
Had cleared the farm of its very
Reason to be. Other graziers had
Simply closed their gates
And walked away. The potential
Of their land surrendering to waste.

A light wind whispered through tussock.
A mob of kangaroos, standing still in the sunlight,
Turned and hopped into the dark shadow of
The bush. White cockatoos screeched across a
Flawless sky. The woman was drugged by the sounds
Of the children, the strange slowness of the day.

At a bend of what was once a permanent
Creek stood a shapely old pear tree,
Its dark oval leaves almost reaching
The ground. Beneath its cranky branches
A small amount of white grass afforded
A softness, the few strands grateful for shade.

At the creek’s elbow there was water enough
For the little ones to muddy and splash in.
She spread the tattered rug under the branches
And carefully arranged the simple bounty of the basket –
mutton sandwiches with homemade peach chutney,
Fresh scones and jam, fruit and the bottle of sweet water.

Paper cups and serviettes were added. Then
From the basket she drew the piece de resistance,
A rich chocolate confection made last night
As the children slept. When all was ready
She rolled some tobacco and sat back against the tree.
Looking up into the dome of leaves she listened.

Her babies played in the creek, the dog
Barked incessantly mingling its voice with the
Laughter and voices of the children. She smoked
Her cigarette. Gazing through the dark frothing foliage,
She felt languid and timeless, seduced by the stark beauty
Of sounds, smells, an odd sense of waiting for something.

Her world condensed around her – music and memory;
The tawny traumatized slumbering land, the distant house,
The love. Everything that was once good was
Now a struggle for survival, a pitiless monstrosity with
No beginning no end no present nor future. She looked again,
Saw nothing. She listened again, she heard nothing.

She rolled another cigarette and forced herself
To think of him. He was Out There somewhere
Working for them, for her. She tried to remember
His hard brown body, the smell of toil on him,
His weight in the bed, the reach of his tongue
On her body, his ready laugh.

His simple trusting manhood protecting them,
His allowance for hope that stung her, penetrating
The psychotic coma she was deliberately calling up.
She thought of the births of their four children
In the country hospital where she had pushed
And yelled and bled them into the world.

The woman knew all this – this was what she was,
What she had been, what constituted her, the wife,
The mother, the farmer. This was her history.
But she had lost the thread of it. The drought
Had killed something essential in her and
Replaced it with filth of hopelessness.

The long morning drifted by growing hotter,
The pear leaves murmured. She called the
Children for lunch. They scrambled up the bank
And gathered around her on the rug. Eating and
Talking they told her of their discoveries in the creek,
Faces flushed, dirty and happy.

The sandwiches were distributed, the water poured,
The scones given their coating of jam, the fruit handed out.
Then came the cake – the ritual climax of the picnic.
It stood before them on the blanket, its earth-coloured icing
Gleaming in the strong light as it dappled through the tree.

They gathered closer, eyes shining, hands outstretched.
Their mother carefully cut the small cake into five equal
Pieces, placing each on a paper serviette. ‘Wait!’
She said ‘until we each have a piece’. Finally, they
Were all sitting with their wedge of cake.
‘Eat, my darlings’ she said, tenderly.

Some weeks later the man had returned, dust from his truck lifting into the still air as he drew closer down the corrugated dirt road. A neighbour walked slowly from the house. He pulled up outside his house, turned off the engine and opened the door. The woman stepped forward and told him what had happened. She told him that his family were all found dead under the old pear tree at the bend in the creek.

Staring uncomprehendingly into the face of the woman for what seemed a very long time, he fell from his truck to the ground, as though he too had died.

What happened next on that remote farm was witnessed by God alone. The father and husband eventually returned home to find his entire family, including the dog, dead. She had poisoned the cake with strychnine.

This is a true story presumably dating from the legendary drought of 1900. Combined with the hardships of the Great Depression, It is also a tale of how the calamity of serious drought can and does destroy lives on the land.

That this tragic woman, who has no name, had succumbed to the pathology of murder/suicide is related to the Medea story, where the female avenges the male for his wrongs. Was this woman avenging Nature for taking the potential of life from her and her children? Or was she just another depressed woman defeated by life?

One can see her story as that of obsession bequeathed through a million years, a metaphor for human behaviour, a story as old as man, or woman. A story like any archetypal myth – operatic, biblical, theatricality taken to the edge of foolishness or farce, adhering to weakness, succumbing to madness. Whatever it was – the murder of children will always be the greatest taboo of them all.

My friend, the painter Luke Sciberras, who had literally stumbled on this terrible story, told me he was walking in the long-derelict garden of a deserted farmhouse near Mudgee when he accidentally kicked a tiny wooden cross in the long grass. Lying among the wild iris and Naked Ladies, it was all that remained of a family.

The painting here is by Luke Sciberras called, Poison Picnic. It was painted especially for this piece.