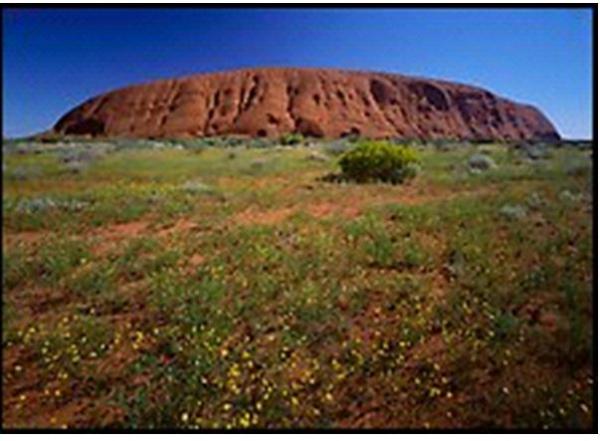 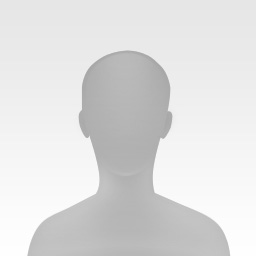 I was here, on the famous Ayers Rock ... I was breathless, my throat was dry, and my legs ached from the rigors of the uneven surface that had tested my stamina beyond words. But I had taken the challenge to climb the rock and now I willed myself to keep going...
The wind gusted fiercely and threatened to unbalance my 4 feet 10-inch frame, but I was determined to steel myself for whatever the next uneven slope or deep set gully that this almighty monolith would present...
My mind wandered back to the coach setting off from Spencer Street Terminal just four days earlier. The Coach Accommodated Tour of 28 days to the outback of Australia's red centre was packed full of exciting places to explore, but there was one in particular that stood out to my eyes, as I read up the brief outline of our stopover at Alice Springs and visiting Ayers rock. The short description also indicated that tourists were encouraged to climb to the summit of the rock and as I settled back in the comfortable seat and watched as the traffic on Flinders Street sped past, I decided I would climb the rock.
Arrival Alice Springs
As we approached Alice Springs on the 30th December 1976, we listened intently as the coach captain gave a brief outline of the history of the rock. After checking in to the motel we were driven 30 kms to Ayers Rock and were taken on a journey around its base from the comforts of the coach. The tourist version of the history of the mighty monolith was fascinating and I gazed in awe of the size and magnificence of what has been known as Uluru since 1993. Unfortunately, as we continued on around the perimeter, we learnt how climbers had met their deaths and a plaque was in place on the summit giving names and dates. Feeling well informed on matters regarding the rock we soon headed back towards the comfort of our motel.
That evening before the climb I felt excited but at the same time cautious as it was quite a challenge for me to even consider such a climb. According to the tour guide a Japanese athlete had conquered the climb in 9 minutes and 11 seconds. It seemed hard to believe but it was the truth and not just told as a tempter for those who were sufficiently naïve to try to sprint up the jagged surface. Even if it took me hours, I would climb it safely and with respect for what I had learnt of its history. It is a sacred place and not to be used as a pre-trainer for budding athletes.

At 5am I awoke to the soft buzz of the early reminder call. "Time to get up" came the voice of our friendly motel staff member. My companion who shared accommodation Anne, was also keen to try the climb and we both were careful on what we ate for breakfast. “Better to climb on a lightly fed stomach”, we were advised.
With breakfast over, it was time to go, and the nerves began to take effect. On the coach ride out to the base that morning we were told stories about certain individuals who took risks by indulging in large quantities of alcohol the night before they climbed only to be overtaken by the height and hangover as the alcohol took its revenge.
We arrived at the base of the rock and were briefed on safety issues for the climb and told not to carry anything in our hands and we would find out the reason during the climb. My shoes unfortunately did not pass as appropriate for scaling the surface of the mighty monolith and our tour hostess found me a suitable pair of joggers. A little large for my size 6B feet but I was grateful. One by one each would-be climber was assisted over the steep entrance to the looming ascent, and at the same time, warned to keep to the white painted line that would be our safety net.
I watched as Anne, my companion, made her way up the rock and I whispered good luck, but only minutes later my hopes for her were dashed as she became stressed at the height and required assistance from her position on the rock.
I felt clumsy as my feet left the flatness of the red centre earth and I commenced the task ahead. It was around 7 am and as recommended by our tour guides, climbing before the heat set in was the sensible way to go.
I had panted and puffed my way over the hard surface for what seemed an endless time as I had no watch it was difficult to imagine how long I had been climbing, it was a constant upward drudge with only brief intervals of flat surface until the rock tilted upwards again.
I felt alone and wondered if everyone else had made it to the summit and I was the last one of the dozen or so of us who had set out earlier that morning. The silence was eerie and for a change I was not swatting away flies. Not even they entertain the thought of the long journey to the summit.
I would soon discover the reason to keep my hands free as I came upon a narrow gully, where I had to lower myself down to its base and then with the help of a short steel chain embedded in the rock, pull myself up to the surface again. My knees were scraped but there was no time to examine, I had to keep going. There were times when, breathless, I would stop and take in the vastness surrounding me and recalling the stories our guide had imparted and especially the care and caution instilled in our climbing group that we obey the guiding marks and not be tempted to wander off.
There were no places to sit, not even a boulder just jagged surface that seemed to stretch upwards.... then suddenly I heard voices. It was two of my fellow climbers and one in particular looked to be quite ill. We had a brief conversation, where both encouraged me to keep going, curiously I asked if one had a watch and learnt that I had been climbing for well over two hours.
I bid farewell to my fellow tourists and wished them luck. It was only a short time after leaving them, that I heard someone calling out, and looking across in the direction of the voices I saw a group of youths, who were heading in the opposite direction to me. One called out, "Hey lady, keep going, there is a kiosk up further selling ice-cold Coca-Cola for 20 cents a can." Anger overtook me as my mouth was parched and the thought of a sparkling, cooling drink of Coke really sounded inviting. I muttered a few curses under my breath having been told not to take any money. Then I stopped and held my head as I realized I had been the brunt of a cruel joke. What was even more annoying, I had actually believed them. I continued with the firm hope that I would meet up with them for retribution once I was safely on the ground.
I pushed myself to go just that bit further and put the ice-cold drink out of my thoughts and within a short time my eyes took in the lectern with a book ... The summit, I had finally made it.

Time seemed to stand still in those precious minutes as I took it all in. Taking a deep breath, I walked over to where I would sign my name as one of the fortunate tourists who had conquered the magnificent monolith. But it was tinged with sadness too, as I read the names engraved in the plaque of those who met with tragedy by falling to their death. I bowed my head in respect and then walked over to the edge of the summit where I took in the view. A view that our Aboriginal Australians had taken in so many times, their dreamtime manifested in this memorial to their culture over the millennia..
I spoke to a tourist on the summit and learnt that I had been climbing for four hours plus a few minutes, but I was delighted to have made it and felt ecstatic as I began my decent from eleven hundred feet up on the rock.
As the coach headed towards our next stopover, I peered out from my window seat and watched as Ayers Rock disappeared from my view. Smiling and thinking, I had climbed it and would always remember the rock with pride and respect for the true meaning it held for all Australians.

Other stories by Beverley Moore 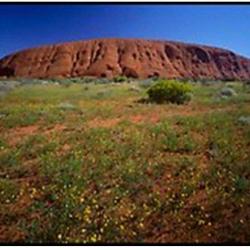