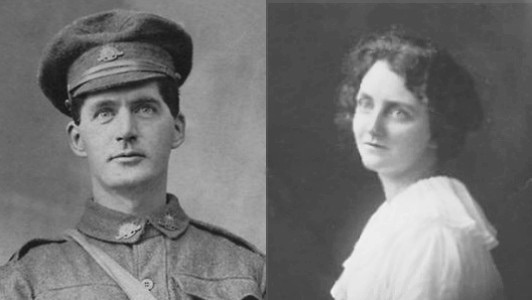 He was living in Sydney, working as a carpenter, when war was declared, and he signed up with the Australian Mining Corps, a special company of miners and tradesmen destined for work underground in the battlefields. This company would become the 1st and 2nd Australian Tunnellers Companies and the ‘Alphabet’ Co, which was actually the Australian Electrical & Mechanical Mining & Boring Co. They would be laying mines - the most famous of which was Hill 60 - but also building underground quarters, checking for booby traps and searching for enemy tunnels and mines.

However, all that was still ahead of them, as he and his fellow recruits looked forward to a night in Western Australia before their long sea voyage to Suez and Egypt. Many, like Robert, were now on a second sea voyage which would bring them back closer to the nations of their birthplaces. They were representing their new country of Australia. The ship had left Wolloomooloo in February, and the soldiers had spent time ashore in Melbourne.

On his night’s leave, Robert decided to go to a theatre. While there he made acquaintance with some people, and afterwards, outside the theatre, this group met up with relatives of theirs. This was a family group, mother and daughters. Robert was attracted to one of them, a petite lass with a lovely Scottish brogue. The mother showed the usual hospitality to a soldier in a strange town, and invited him to their home for the evening.

Jean had emigrated the same year as Robert; 1912. She had sailed with her parents, and brother and sisters. The family had previously emigrated to South Africa but found it didn’t suit and returned to Scotland. Jean’s mother, Jemima Jane, not liking these choices, had decided on Australia, and had gone off and bought the family tickets. Jean came from the opposite coast of Scotland to Saltcoats; the port of Leith in Edinburgh.

On 8 March 1916, HMAT Ulysses sailed from Fremantle, with more than one thousand men waving goodbye to the crowds that lined Victoria Quay. The ship cleared the heads of Fremantle Port and then, while making way for another troop ship, ran aground on submerged rocks. By this time it was evening, so it was next morning that the soldiers were evacuated from the damaged ship, which was taking some water.
And so they were disembarked again. No other troop ships were available, and repairs to the Ulysses, now nicknamed “Useless” by the lower ranks, took several weeks. The troops were billeted at Blackboy Hill Camp, 14 miles east of Perth, and Robert and Jean had a deal more courtship time. The family, including a jealous younger sister, went down to the port to farewell the handsome soldier when the ship finally set off to the war on 2 April. Jean and Robert then corresponded as best they could over the next three years. Robert addressed one postcard " My Darling Girl" and then writes, “This heading sounds very well, don’t you think so. Of course I haven’t had your permission so excuse me please. All the same I like to call you so…. PS What will your mother say when you show her this?"

He returned from World War I, and on 9 August 1919, the couple were married in Perth. They moved to Sydney and their daughter Enid was born there in 1920. She returned to Perth, where she married and had her four children, thus continuing the family line.

So a shipping accident was a fortuitous contributing factor in the beginning of this side of my husband's family in Australia.

Other stories by Heather Hill 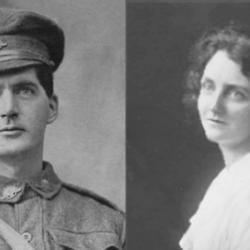