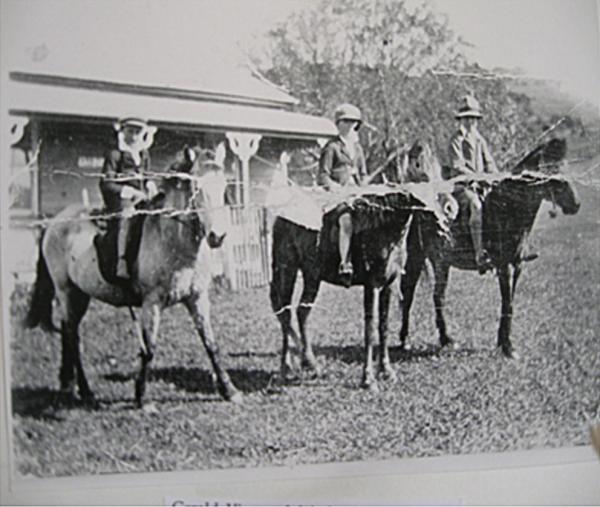 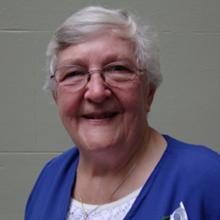 It was towards the end of 1926 that my parents moved to a dairy farm called Myrtle Mount a few miles from a quiet country town. The road to the farm turned off the main highway on to a rough gravel road, past several small dairy farms, up a steep hill until it reached the last farm on this road. Tucked under the shadow of Curry’s Mountain, the farmhouse commanded a splendid view of the surrounding country but that was of little interest to this family of Mum, Dad and two small boys, aged eight and seven. Two baby boys were left behind, buried in the Church Cemetery of the town near their former farm.

This farm consisted of a farmhouse, farm buildings, dairy and cow bails and acres of rough land. Sulkies pulled by ponies were the only mode of transport. There was a cart, pulled by two draught horses, and used for taking the cans of milk to the Factory where milk was railed to Sydney. The factory also made butter. An ingenious invention was used for carting things, and people, around the farm. This was the ‘slide,’ a flat platform of slabs with two steel runners, and pulled by the draught horses.

The family grew with the birth of a little girl who died at the age of two from peritonitis when the Doctor misdiagnosed a ruptured appendix. There followed two more boys and then I was born at home in the farmhouse. My oldest brother was fourteen and he later recounted how his father told him to put ‘Star’ in the sulky and drive to town to bring the mid-wife as quickly as possible, meanwhile he would put water on to boil. The fourteen year old was rarely allowed to drive ‘Star,’ a temperamental animal, but this was an emergency!

The older boys rode their ponies to school in the town each day and both did well but when they reached the age of fourteen they left and worked full-time on the farm. The next two boys, when it was time for their schooling, walked through the paddocks, down the hills to a little school standing solitarily amid the farms on the flats. Walking downhill was no problem but the walk home after a tiring day at school was a dreary prospect but brightened by a sympathetic farmer’s wife who lived at the half-way mark and often had some refreshment for them, which they gladly accepted.

The farmhouse and farm was my environment for my first five years. When I was four, Mum gave birth to another girl, and the family was complete. Life was simple for us. Money was never very plentiful but we were fortunate to have a Dad who was a good farmer and a Mum who was a wonderful cook. Dad and the boys worked the farm and grew all our vegetables, so we were never hungry. Sometimes we were visited by ‘Swaggies’ men down on their luck, who were looking for a meal. No Swaggy was ever turned away. Mum would always find something with which to prepare a meal, and then after they had eaten, would send them off with a few extra sandwiches. We did not have many who trudged up the steep hill to Myrtle Mount but when we moved, in 1938, to a different farm near the railway line, we had quite a few of these visitors, some of whom slept the night in the unattended railway waiting room. Others found a comfortable place under the trees by the roadside. These men were always on the way to somewhere from nowhere and tramped the by-roads, calling at houses where they knew ‘the Missus’ would ‘give them a feed.’

Dad and the boys were kept busy hand-milking the cows twice a day, seven days a week. The milk was carted to the Factory, animals were cared for, the paddocks were ploughed with the old wooden plough drawn by a draught horse, crops were sown for winter fodder and the vegetable garden was attended to. There was little time for frivolity! The boys were members of the local Rugby League Club and excelled at the game, the highlight of winter Saturday afternoons. Dances and the occasional Ball were highlights of the year to be enjoyed often until the early hours of the morning, then home in time to milk the cows!

Dad was ingenious at utilising empty kerosene tins. The kitchen did not have a sink, so Dad made a very clever dishwasher. An empty tin was upended and a cut was made diagonally across the top, down one edge and across the bottom. When spread out, two V-shaped receptacles appeared. The rough edges were made secure with pieces of smooth wood and, Hey Presto! we had a dishwasher. One side held the hot water and the other was the draining side.

He could also make two buckets by cutting a tin in half across the sides and then attaching wire to make a handle. The tins were used for carrying water or fruit or blackberries or anything else needing transport. They were sometimes used to boil up clothes on the stove or cook animal food. Another tin was made into a heater for winter warmth. One end was cut out completely, then a three-sided cut was made part way down towards the bottom of one side, and bent back to form a vent. Wood was stacked through the top and, once the fire was lit through the vent, we had a wonderful heater that sat in the open fireplace.

There was no electricity so all the work in the dairy and cow bails had to be done by physical labour. A copper in the dairy heated tank water for cleaning the dairy and bails. The dairy also contained the separator to separate cream from milk. The skim milk was fed to the pigs and the cream sent to the butter Factory. In the kitchen, cooking was done on a fuel stove. This meant that a wood-heap was a necessity. Cutting the wood for the stove was a chore for Dad until the boys were old enough to take their turn. The stove was lit early in the morning and kept alight all day.

Wood was necessary, too, on washing day when the clothes were boiled in the copper, a large copper tub inlaid in a brick square built next to two tubs. One tub was filled with cold water for rinsing and the second used to ‘blue’ the clothes and sheets and towels so that they would be a dazzling white. The clothes were wrung by hand unless there was a hand turned mangle to do the job. They were then hung on the clothes line which was strung between two posts. Once the articles were pegged out the line was held up by a clothes prop, a specially made long stick with a forked end that was attached to the line. Many a time the prop slipped and the washing ended up in the dirt necessitating a re-wash!!! Load after load went into the copper, all in correct order, of course, until the last article was on the line.

Ironing was done with flat irons heated on the stove, flat side down. They had to very clean as a dirty iron could spell disaster. Starch was made for some dresses, aprons, tablecloths and other household articles. Women of today could not imagine what washday was like for their female ancestors.

Wonderful meals were cooked on the old fuel stove. A great black kettle sat on the hob, always kept filled with water and easily brought to boil should someone want a cuppa or a visitor chanced by to be treated to farm hospitality. No food was ever wasted. Vegetable scraps were kept for the pigs or the hens.

Pigs were raised for sale as were the poddy calves and chickens. Mum had a flourishing fowl yard and chicken was part of our diet. Once Mum had caught the chosen bird she laid the head across a log of wood at the wood-heap and chopped its head off. Eggs were plentiful and often used for cooking her delicious sponge cakes. The only groceries we bought were things we could not grow ourselves: sugar, flour, tea and so on. Butter was bought from the factory and meat, bread and groceries were delivered once or twice a week. An ice-chest kept things cool but not frozen. There was an occasional trip to the nearest large town and on rare occasions to Sydney, usually by train.

Without electricity the only lighting was provided by the kerosene lamps or candles. We were fortunate to have an “Aladdin” lamp which gave a stronger light than the kerosene lamps. The evenings were spent reading the newspaper, or for my mother, knitting, mending or crocheting. Card games were a favourite. The wireless, paid for in instalments, arrived in 1937. What a difference that made. A handsome cabinet held the workings and it stood in a corner of the dining room. It was avidly listened to for the news and the serials, ‘Dad and Dave’ from Snake Gully, being a favourite.

Although the house was not large there was always room for visitors – relations and friends, especially at Christmas. With little spare money there was never an abundance of presents but we excitedly received whatever Mum and Dad could afford. The main event of the day was the Christmas Mass. We listened with delight to the beautiful carols sung by the choir. Then it was home to a traditional dinner.

Prior to Christmas, Mum saved her pennies to buy the ingredients for the Christmas Pudding and the Christmas Cake. What fun we had on the day that the Pudding was cooked. We all had a stir and made a wish and waited impatiently as the mixture was tied up in a cloth and lowered into a huge saucepan. Then we attacked the remnants of the mixture which clung to the sides of the big basin, not that there was much left, but we scraped whatever we could. Wonder of wonders! Christmas was the day we had bottles of soft drink. Having special treats just this one day of the year made us treasure and appreciate the good things that came our way.

Sundays were always special days when we piled into the two sulkies and went to Sunday Mass, always at 9.30 am Mum prepared sandwiches and a flask of tea to have after Mass especially for the men who had been up very early to milk the cows before we set off. After Mass the men and women caught up on the latest news whilst the children played. Later we went to the Milk Bar and, with our one penny, carefully chose an ice-cream or a lolly.

When Dad’s unmarried Aunt died, she left him enough money to buy a second-hand Chevrolet car, which lasted us for many a year. Dad did most of the maintenance himself. The sulky ponies were then used mainly for riding until they reached their use-by date.

In 1938, we moved to a larger farm and a more commodious and comfortable house. I started school in 1939 and soon after, World War Two erupted. So, the Thirties having passed away we now must say farewell to this little girl as the Forties rolled in and the War continued, changing all our lives forever.