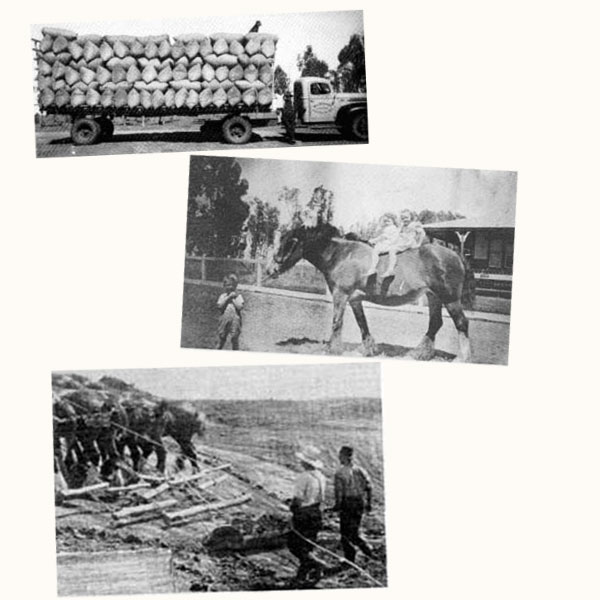 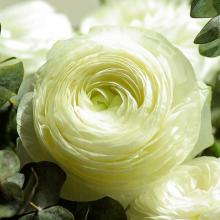 In February 1922, my father, Jack O'Shannessy, purchased from Mr & Mrs W Hawks, allotments 34, 34A and 35, Parish of Ultima, County of Tatchera. He was the eldest son of five boys and two girls, the children of Edmond and Margaret O'Shannessy, Australian born of Irish parents. They lived in Kingower district where their mother died when my Dad was 15, and his eldest sister was 17. With the help of relatives, she was able to care for the younger children until she married at the age of 21. My Dad remained helping on the small farm, until he was 21, when his father gave him a horse and dray, and his blessing for success in what he did. Grandfather was also a road contractor.

Dad made his living cutting and carrying wood and doing some road works, which his father had taught him. He and my mother were married at St. Mary's Catholic Church in Inglewood on Easter Monday 1908. My mother was Madalena Baptist, whose father was Swiss, and her mother was of Scotch decent. She was the eldest of 3 sisters. Her father died of typhoid fever when she was 5. My mother died in 1910 when I was eleven months old. I was cared for by my grandmother and aunties.

Before coming to Ultima, my Dad and his brother were partners in share-farming and road contracting for a number of years in the Bridgewater area. After coming to Ultima my Dad, was told by an acquaintance, that the Mallee was so good he would be able to retire in 10 years. However, that didn't happen, as a number of those first 10 years, were not very financially rewarding.

In 1924 my uncle and auntie and their 2 little boys, came from Melbourne, and lived at the farm. Uncle did some of the land clearing and bag sewing for our neighbour Mr P. O'Toole. They didn't stay long in the Mallee as conditions were too hard after living in the city.

In 1928 I came home to housekeep - learned by many mistakes. We had expectations of buying a car that year, but the crops failed, and we didn't have a car until 1936. The 1935 harvest was good, and as well as buying a car, we were able to build a new house, which cost about 700 pound.

In June 1940, Joe Farrell and I were married at Sacred Heart Cathedral, Bendigo. Joe was employed by the Victorian Railways and was able to be transferred back to Ultima and we were able to remain with my father. In the early 1940's, there were some very bad years, and not much farm income, and in 1944 there was a shortage of feed for stock, and draught horses were being sent down country on agistment.

To avoid drought, my Dad, the 3 Bell brothers, Mr Bob Healy, Mr George O'Brien and Mr Doug Brydon, formed a syndicate and camped for 3 or 4 months on some of the Murray Downs land, where they sowed millet, and were able to have feed for the horses until farm conditions improved. Dad was a lover of horses, and always had a good "hack"- one was "Roany,"which he brought from Bridgewater with him. She was getting old, and when feed was scarce, he watched her getting poor and had to destroy her. It hurt him quite a bit.

In 1928 Mr Joe Fallon, Harry Filbey and Dad enlarged the dam near the house, and we hoped to have water piped to the house for domestic use and the garden, but that didn't come until sometime later. For washing, water was carted in a barrel, and ashes put into it for a few days to settle the dirt, and then it was fit for the washing. I guess boiling the clothes in the copper helped the colour of the whites quite a bit. For reading and sewing, Kerosene lights were used, and it was quite a highlight when electric power was connected in 1954, and we were able to have a washing machine, iron and refrigerator.

All the farmers worked horse teams in the early years and a working man was employed full time on most farms. When the crops were good, my Dad cut a lot of oaten hay and six extra men were employed for a week cutting, stooking, carting and stacking the hay, and it was always saleable. During the 50's there were a few years when the straw left after stripping was very good, and contractors came in and cut and baled the straw and it was sold to the Strammit Company in Kangaroo Flat for making lining board. The Company is still in operation.

In 1945 the horses were replaced by a tractor, and more land was able to be worked. In August 1946, my Dad died as a result of an accident. After 6 months Joe resigned from the Railways, and we lived on the farm where we reared our son and 3 daughters. We had sharefarmers work the land until John was 17 and was able to do a lot of the work with some help.

In 1967 Joe and I moved into Ultima township, and later on John and his wife Kaye took over the working of the farm. The lived there for many years in that same house, which has had several extensions and renovations. They and their 3 children, Donna, Dean and Michael, were interested in sport and work for
community projects and improvements for the Town.

This has a little bit of sentiment about it: When the O'Toole family sold their land in the 1980s, John was able to buy the block that his great uncle had cleared for Mr O'Toole in 1924.

Other stories by Winn Farrell 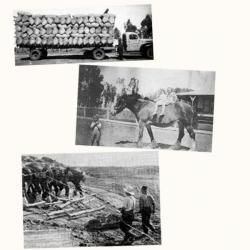