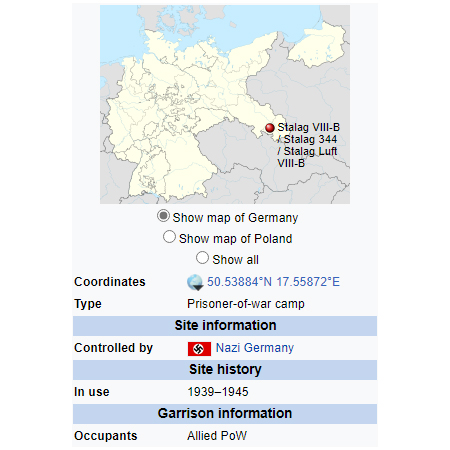 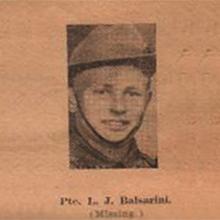 This story was originally published in the Victorian RSL Newsletter and is now being published here posthumously.

Les Balsarini, or Gooza to family and friends, joined the Australian Army in March 1940 along with his brother, Skeeter. At the time he was a young man of 21.

During his time in the Army, he was posted to the Middle East. It was here that he was captured by the Germans and became a prisoner of war. After a total of five years and eight months as an Australian soldier and prisoner of war, he returned to Australia.

Like most who enlisted, Les joined because he saw it as his patriotic duty to Australia, and he felt that Australia had an obligation to England; In times of trouble, Australia should help England and they too would come to us in our times of need. He said, "We couldn't defend Alice Springs against the Australian Army". Australia is today in the same position, a huge country geographically but one with a relatively small population.

Gooza had no hard feelings for the men who chose not to go to war. As he put it, "Someone had to stay back and keep the country going". Many of these men were more use to Australia, staying at home, than if they had joined up.

During his time in the Australian Infantry, Les was posted to the Middle East. Here he fought and went on leave in Greece, Crete, Libya, Tobruk, Palestine, Jerusalem and Syria. In Jerusalem, Les saw the ancient ruins of the Holy Land. In Syria, he spoke of four freezing days when the temperature dropped to -32 degrees. Afterwards, it became warmer, he said, the temperature rising to -31 degrees! He couldn't believe he was seeing snow in the Middle East, and a river which had frozen solid, one-metre thick, and underneath that ice the river was flowing quite naturally. But he found the cold hard going and said he hoped never to see snow again!

Les described the comradeship between the soldiers as something you could never compare. He spoke of the Allies - the Canadians, British, and New Zealanders - in a most outstanding and admirable manner. "They were all terrific blokes," he said.

Of the Germans, he said they were a very dedicated race but also very 'downtrodden'. Hitler was the only person they thought could lead them to victory so when accepted him with open arms. The Italians he described as being a weak and indecisive, "They were scared stiff and were as weak as water".

He had not had any type of training in the Army before his official 11-week training began in 1940. The training camp was at the Puckapunyal Army Base. Les described it as not doing any harm, but being bloody hard work. During the training period the soldiers would use brooms as a replacement for guns as these were not readily available. When Les was posted to the Middle East he felt that the training didn't really prepare them for what they encountered.

When the soldiers were in action they would be equipped with a pistol, an owen gun and a hand grenade. Les was caught by the Germans as a prisoner of war in a situation where he and a friend were scapegoats. The enemy were attacking and he and his friend were put in a position where they had to wait until members of the Battalion were out of danger. Les and his friend never quite made it out of the danger zone though. Their capture took place in Crete and Les was sent to the prisoner of war camps around Germany. As he moved from camp to camp, he met up with many people including Canadians, English, Yugoslavians, Greeks and Jews. But as the Jews were transferred to other camps, such as Auschwitz, never to be seen or heard of again, Les and other members of the camp had ideas about what Hitler was doing and his genocidal plans for the Jewish communities.

While in the prisoner of war camps, Les said the prisoners were tortured mainly through starvation, the main source of food being bran. They were also kicked and would be forced to work continually in labour-intensive ways such as on the railways.

He remembers one particular occasion where the prisoners marched for four-days carrying ammunition that would outweigh them . At this stage, Les's weight was down to four and a half stone, half his normal body weight.

He escaped from the camp after four years of torture during some uproar between the German soldiers and officials. During this turmoil, Les and a friend decided on the spur of the moment to escape. With great caution they made their way out of the camp and headed for the nearest town where a Red Cross base was set up. He believed that the Red Cross saved both he and his friend at that time he subsequently thought they were the greatest thing on earth, "Thank God for the International Red Cross," he would say.

During V.E. Day, Les was in England for one year and talked of seeing King George, Queen Elizabeth and Winston Churchill on the balcony of Buckingham Palace. Below them people were cheering and clapping and joining in the great celebrations. He also spoke of when he had returned to Australia and the war was declared over. On that day Les was in St Kilda, Victoria, and remembers well the lively moments of everyone. He described the night as being one with a terrific atmosphere.

He spent a total of five years and eight months in the Middle East and Europe.

When Les was first captured by the Germans his family did not know if he was still alive, he was, as the Australian Defence Force said, 'Missing in action'. This period was the most difficult for his family. But after one month, Les was found to be alive and a prisoner of war in Germany.

He described the moment of seeing his family after more than five-years as being "totally exhilarating". When he left to go to war his brothers were children , when he returned they were grown men.

When WWII was over, Les remembers the prejudice and hatred many Australians had for the Germans and Italians. He was also questioned at the beginning of the war about his surname. He had answered that his surname may have been Italian but he considered himself to be Australian.

Les kept in contact with friends from WWII and was a member of the Returned Serviceman's League (RSL) for around 50-years. He had no hard feelings towards the enemy he was fighting so long ago. "It was a war and you have to forgive."

Other stories by Les Balsarini 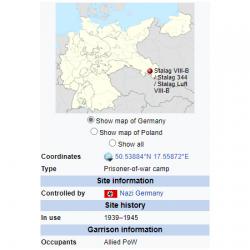