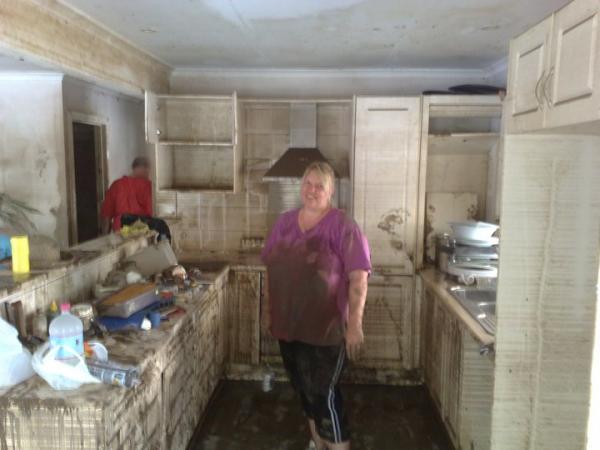 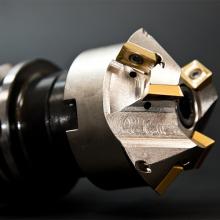 Tuesday 11/1/11
My son rang early to say that he was on his way to work and that the Brisbane River was very high, lapping over the pontoons of the boat ramps in the river. It had been raining heavily for a week and was still raining at the time. He had rung my daughter who had got upset, so we contacted her and told her we would be around about 8.00am to see if we could help. Their house backs onto a creek that flows directly into the Brisbane River.

I took around some tarpaulins as we had decided to sandbag the doors in case we got some minor flooding. My daughter and son-in-law and my wife went and got some sandbags from the Council depot and then went and got some sand. We sandbagged the doors except for the front ones so we could get stuff out. We were the first house in the street to start so that prompted others who came to see what we were doing. All this time the rain was pouring down and we were soaked, but at least it was warm.

Initially, we were only going to take things like important papers, valuables and computers and store them at my son's place. He also lives in a place that overlooks the river but is quite high. However, my wife kept insisting on taking more and more - as much as possible. As the day wore on, several of my daughter and son-in-law's old friends turned up and so we decided to take more. This included all the electrical goods and most of the kitchen items and the lounge suite. The heavy furniture stayed, as did all of their books and most of the stuff in cupboards and wardrobes. The rain kept belting down and the creek at the back was rising. The water was getting higher in the Brisbane River so my son came home from the city as he thought he might be cut off. The water was also starting to lap the road in places back to our place. Late in the afternoon there were only heavy items left to shift and my back was killing me so I came home and had a shower. My wife stayed on to finish the kitchen. I had just sat down when a friend called to tell me another friend was in trouble and could I help, so it was off again shifting out household goods until after dark.

Wednesday 12/1/11
We awoke to a clear day but it was very quiet. Normally we get a lot of traffic passing our place in the morning on the way to work. My daughter and son-in-law were staying at my son's place and we were minding their dog. We got dressed and went for a walk. We were cut off in four places by flooding in nearby streets and the water was getting higher. Throughout the day we kept checking the neighbourhood and the water kept rising. We were cut off from the shops and from the kids, and more and more houses were getting inundated. All of the cars in our area had been moved to the higher ground and were parked in the streets all along the roadside. We were relatively okay although we lost power in the afternoon. We could keep in contact with people on our mobile phones. The water was in the street below ours and we kept checking to see where it was up to. We reckon we had 3 to 4m for it to rise before it affected us and as we were on the high side of the street we would have plenty of warning when it got into the back of our neighbour's places across the road. If this happened the plan was to start shifting items to the car shed which is about a metre higher than the floor level of the house. As a precaution, we shifted all of the cars to this level. The flood peak was supposed to be at 4.00am the next morning.

Thursday 13/1/11
Thursday was virtually a repeat of Wednesday. We had nothing much to do except read and check the water levels. During the day we managed to borrow a gas light and battery-operated radio from a friend. It was evident the water was dropping and by Friday morning it had dropped sufficiently to go back to my daughter and son-in-law's place.

Friday 14/1/11
We arrived first. I don’t remember the time but it was fairly early. What a mess. The whole street had gone under up to the rooftops. Everything was covered in a brown clayey mud. The first job was to get a path to the doorway so we started by sweeping the mud from off of the drive. We then cleared away the sandbags but couldn’t get inside as we didn’t have a key. We kept working on the mud on the outside so that we could walk on areas without slipping over.

My daughter and son-in-law arrived and we got into the place. It was not a pretty sight with mud everywhere, some rooms relatively intact but covered in mud, some rooms all strewn about and upside down. Again we started with the floors so that we could walk safely into each room. We opened all the doors and windows and began to clear out all the ruined remains. The friends that had helped them shift also turned up to survey the situation and then went home to get tools and equipment to help. We worked all day and the piles of rubbish outside each house along the street got bigger and bigger. When we were ripping up the floors and carpet, a man and his son turned up to help and then just disappeared once the work was over. We never found out their names. All morning a guy in a bobcat worked up and down the street trying to clear the mud that was being swept out of the houses. He did a great job.

At lunch time one of the friend's wives arrived with lunch and drinks. When all of the loose items were cleared we had two generator sets and two pressure washers so the guys started to clean out the remaining mud from the floors inside the house. My son was using his to clear the pathways surrounding the house. Early in the afternoon four members of the SES arrived and asked if they could help. We asked if they could bring to the footpath all of the stuff we had dumped out of the back windows from the bedrooms as we were all fairly tired by this stage. So they did this and went on to help another lot.

We then realised we hadn’t opened the garage and when we did it was a hell of a mess with everything dumped on top of each other. Luckily, the army arrived and they pulled everything out of there. We then pressure washed the few items we thought that we could save and locked them in the garage. The house was a mess with the gyprock starting to sag in the ceiling in some places. The footpaths outside were covered in piles of rubbish and there were people everywhere, mainly neighbours and their friends, covered in mud.

One of wives of a helper turned up with a few beers that were very welcome. There wasn’t much more that could be done so we went home. Luckily there was just enough hot water left to have a shower and clean up. We then went out to some friends for dinner though we were absolutely shattered. They still had power.

It is the first time that I have felt that I was over sixty years old.

Saturday 15/1/11
The day was fine and power was still off. Back to the house but a bit later in the morning. The clean-up had begun with a heavy loader and a flow of trucks picking up the piles of discarded materials on the footpaths. Some houses were still cleaning out materials but most had finished the previous day.

The house was in worse condition with cracks in the bedroom slab and more sagging gyprock. Some friends turned up with a generator so we took it around to my son's place to keep his refrigerator going. We had the family around for a BBQ that night.

The Mayor’s Volunteer Army had arrived. The street was packed full of cars, people, trucks and loaders. A food stall dispensing free food and drinks had been set up at one end of the road and it was closed to all but resident’s cars. There wasn’t a lot to do at my daughter and son-in-law's place as we had done it all before. Most of the other residents had done the same so it was mainly watching the clean-up continue.

Sunday 16/1/11
Skips were located around the area so we dumped a lot of food from the freezer that we couldn’t keep cool any longer. The local Coles store was giving away free ice so we stacked the fridge with as much ice as we could.

We also managed to borrow an old phone and the lines were still working so we had communications other than our mobiles again. That night we went back to our friend's place for dinner and a hot shower and a spa.

Monday 17/1/11
Most of the street was clear of rubbish and people. They even got a mail delivery which I picked up. Again we went to a friend’s place for dinner.

Tuesday 18/1/11
My daughter and son-in-law have decided that they will live at their Lowood house that they bought as a rental recently. It looks like their old house will need to be demolished. The floors are cracking in some places and it has asbestos in some of the walls. It also has a terrible smell. My wife spent the day at my son's place helping my daughter pack some of the items saved. Some will go to Lowood and the rest put into the free storage for six months being offered by one company. My son-in-law has arranged for Boystown (who he works for) to transport them so they will probably shift next week. They have been looking at high-set kit homes as a possibility for a rebuild. Several of the neighbours are looking at putting caravans and motorhomes on their properties while they get them habitable again. The next thing is to wait for the insurance assessor to see if they can get any help for the rebuild. The main problem will be finding the money to rebuild as they still have a large mortgage partly due to the extensive renovations carried out last year.

Life is gradually returning to normal as we got power back on late in the afternoon. Oh, the joy of a hot shower.

The end result was that the house had broken it's back and had to be demolished. After a long fight with the insurance company, my daughter and son-in-law received a payout through help from the Financial Ombudsman. This enabled them to finish the installation of an old Queenslander which they had moved onto the block, raised 3.5m above ground level and had got it to a liveable stage about a year after the flood had occurred.

floods
up
288 users have voted, including you.

Other stories by Trevor Johnsson 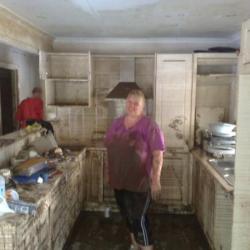