Cuttles started a garage here first, on the same site as now. There were a few cars around then. It was a lot easier job in those days. It wasn't that easy, but it was easier than it is today.

There were a few T. Model Fords around. At the back of Cuttle's shop that was where the garage was. It used to be Saturday night trading then, and that back yard was full of horses and gigs. One of the big sort of engineering places, was the blacksmith's shop down near the Post Office. You had to have a blacksmith's shop in those days, and it was big business. They repaired ploughs and shod horses, and did a lot of repairs too. There was a real top-line blacksmith there by the name of Jack Irving. He was a good tradesman and had about 18 men working for him. They would shoe horses, and use the bellows, to heat the fire, which would heat and soften the iron. A bloke would be standing there pumping the bellows all the time.

Jack Irving could shoe a horse well. He had a good old lathe down there, and there is a train of gears on the end, which if you wanted to screw-cut, you put your bit of stuff in the  "chuck," which holds it, or grass it. The thing spins, and you feed in, on two rails, a cutting disc, and you push the tool up to it, and it peels it off like that, to what size you want. And you could put threads on it depending on the size - if you were going to put 12 threads per inch in it, you would put a train in the end that drove the leads to it; you would change the gearing. A big gear will drive a little gear fast, and a little gear will drive a big one slow. Jack Irving could pick up a bit of chalk, and I could see him working out; he could screw cut without looking at a book.

Then when they had wagons, with wooden wheels, there was a steel band around the outside of them. You were rated as a wheelwright to be able to replace the steel band around the wooden wheel. They'd put the steel band in the fire and get it hot - real hot - and they'd have to cut the steel band to the right size. You see it had become loose, it had fallen off-it wouldn't stay on the wheel, because the wooden part had shrunk in the heat and dry climate. They'd cut it and take a piece out, to make it smaller, to make it fit. Well then, there were no mighty measurements, it was nearly all experience, to work out the correct amount to cut out. When they'd got the steel band red hot, the whole gang got ready, all with tongs and they'd grab this red hot band of iron, and drop it on the wooden wheel. It all depended - if they'd cut too much out off it, it used to turn the guts of the wheel right out, because it would squeeze up - the centre would pop out. The spokes would push the hub and out she'd go! And if it didn't, there you'd go - and it was good. That was a real art; you had to have it, to shrink a rim on a wheel. There were a lot of wagons in those days, and there were spring cart wheels and dray wheels to do too.

Jack Irving had an old Chev car, and every customer who came in, he would go down the pub and have a couple of beers and then go home, and later he'd go down again. I think it killed his business.

He was a beautiful footballer, and he had bandy legs. He had a girl in the office - Peg somebody and she was a beautiful person. How she put up with him, I wouldn't know. Jack Irving had a lot of good in him. He shod a lot of horses - in those days, you just had to do it. They didn't shoe the working horses in the paddock, but they had to shoe the buggy horses and gig horses - where ever there was hard ground. There was no bitumen then, but the roads were hard.

Starting with the T.Model Ford
Neither Clem nor I played football, but Jim did. We didn't play any sport - we were always playing with motorcars; T. Model Fords and Chevs, you know. I remember one time when Barry and I were over at Robe. We'd been over to Western Australia, and we came back through Robe. We started talking to a bloke there, talking about motorcars, one thing and another and Barry said, 'Jack might know something about that." "Oh," he said, "Does he? He wouldn't know much about T Model Fords." So Barry said 'You'd better ask him and see." Well that bloke would have kept me there forever. If he picked up a nut I could tell him exactly what it was. I'd really cut my teeth on T. Model Fords of course.

The best model car that I ever saw in my experience, for price, was the National Chev; it was a 4 cylinder 1928 model - it was a good motor car, and it had an oblong shaped emblem on the middle of the radiator. Before that, there were other cars - one was that they called a "Grasshopper" - it was a Chev, but it had short semi-eliptic springs - they weren't full cantilever, which would give a better ride. There was more flexibility in that, than if they were only halfway.

We had 2 Chevs, and we had three lots of numbers, and we just used to put the numbers on them. This is true you know.

Horses
My father was a great horseman - he bred a lot of race horses. He won a Grand National Steeple Chase. There is a big picture of the horse in the kitchen at home. "The General" was the name of the horse. He sold it to a bloke named Eric Connolly - the biggest punter in Australia - still today, I think. He sold it to Connolly, and Connolly never had any money. They went down Bourke St. and they went in and the boss of the Bourke St. shop, whatever it was - not far from where the Post Office is - and this is where he paid him out with 100 pound notes. He paid him for the horse there and then I can't remember how much it was, but the boss of the shop paid for the horse. My father had been a good horse rider, when he was young. He sold "The General" because my father was short of money. He had 14 race horses; at one time, some quite good ones. My father's head office was up in the top-end of Bourke St., and it is still there today. He had a good job - he was a top line inspector there, in the Lands Department. He had been an inspector up in Seymour - that's where he meet my mother.

Why he got out of race horses was he had a trainer, whose name was S.P. Casey - it's funny how I can remember these things - well S.P. Casey was the top horse trainer then, and Dad was reasonably stern in a way. He talked to Casey about who was doing the winning with race horses, and one thing and another, and Casey said to him 'Jim, listen, I think you know, that you've got a good job, and these horses - you want to be the jockey and the trainer, and you want to be everything and then you'll WIN!" And Dad took notice of him, and sold the whole lot! He had his horses at Northwood Park; it's a big place and still owned by the same people. It is at Seymour. My mother is buried at Seymour and Dad's buried at Woodend. They pulled a big old cemetery to pieces because it was just a wreck. They shifted all the tombstones and made a park out of it which was a better thing to do. So that's why he got out of horses - he took Casey' advice. 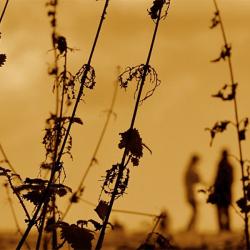 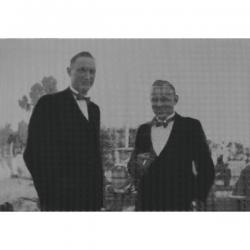