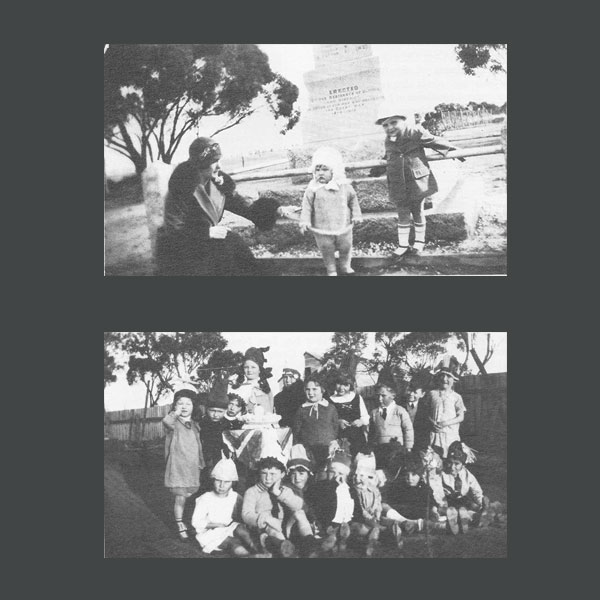 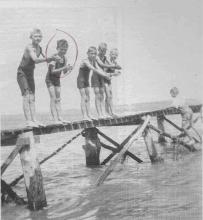 My father and mother first came to Ultima from Sea Lake in 1922 when my father bought the business of John Guy Jnr. My father's business was that of General Merchant - Grocery, Drapery Agencies etc. We were agents for H.V. McKay; Massey Harris; Shell Oil Co.; Mt. Lyell Manures; ATLAS Assurance Co. and National Mutual Life Assurance Co. etc. We were direct competition to Cuttle's Mallee Stores.

My late uncle - Cliff Rees and his brother Phil Rees - both came to Ultima at the same time as my parents in 1922. My father had sponsored them out from Wales under the Big Brother Scheme after the First World War.

Cliff Rees married Margaret Ferguson who was the local music teacher in Ultima at that time - she used to board with the Gilberts and can still tell you endless tales about old Dolly Schooling (the solicitor) who used to fancy all the girls.

My uncle Cliff Rees died in 1984, aged 74. His brother Phil died in 1964. My Aunt continued to go out 4 days a week playing the piano for the C.W.A. and all the "Oldies" functions in Frankston for years as a senior. She kept a diary every day of her life, a gold mine of information on Ultima in the old days. She taught music for many years in Ultima (going back to the 1920's, and used to play duets with Bob Gundlach). At one stage she and her husband ran my father's Branch store in Meatian - so she knows all the Meatian folk from way back.

To the best of my knowledge, my Mother did not commence actually teaching music until the early 1930's. She had of course always been involved in concert parties etc. particularly those involving children.

We left Ultima at the end of 1936 but my memories of Ultima are still vivid and clear after all these years - in many respects it only seems like yesterday that we were living there. I can quite readily remember Pat Taylor and her sister coming to our house for music lessons from my mother. There were also some other pupils from down Meatian way - name of Fox, if my memory serves me right. We went to live in Regent until we gradually drifted off. My mother lived there until 1976 when the house was sold and she came to live with me and my late wife.

I was married on in 1953, to Bettina Beech. We had two children - Phillip, who became a full time Naval Officer; and Jennifer, a Television Director with Channel 10. My wife died in 1985, aged 56.

My sister - Lady Doreen Callaghan, was married in 1965. Her husband, Sir Alan Callaghan, then Chairman of the Australian Wheat Board and a widower.

When my late wife and I were first married we lived in a suburb named Montmorency where one of our closest neighbours and friends was Myra Randall (the late George Young's daughter). Myra taught the Organ and has always had musical interests - her family were originally from Ultima East.

Famous characters in the town I remember very well were Alfie Oliver, Granny kitchen, "Liver" Olver, Dolly Schooling, Bob Stanesby and his son Herb, together with many others.

I can clearly remember the day electric power was switched on in the town for the fir st time and all our old oil lamps went into the cupboards.

I can also remember the very bad dust storms when it would be midnight at midday.

I can also remember the night the Ultima Hall burnt down - we lived next door to it so it would be hard to forget. Can also remember when the old wine shanty burnt down - it was opposite the Post Office and on the site where the First World War Memorial is now located (the Memorial used to be located at the entrance to the Football Ground).

School Sports at the football ground spring to mind - complete with Maypole dances, I have never seen a Maypole Dance since those days.

Sunday School picnics at Lake Tutchewop (full of leeches in those days) also come to mind.

Other stories by Ray Draper 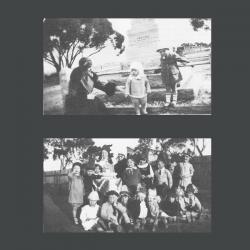