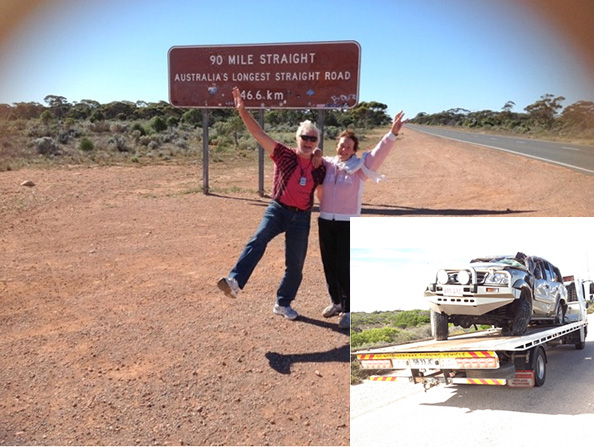 On the 2nd April 2016, my husband and I left our home on the Sunshine Coast, Queensland, to travel by car along the Nullarbor Plain to Perth in order to promote my autobiography. We travelled south through Armidale to Ballarat and Geelong so we could once again experience the exhilarating drive along the Great Ocean Road and assess those areas of the coastline that had suffered from the devastating fires of the previous year. Along the way we experienced many pleasant, if mundane, attractions but only one event stood out for me during that long and lonely track of the Nullarbor.

All along the good, sealed road that connects Port Augusta in South Australia to Norseman in Western Australia we noted road signs warnings to motorists to ‘Rest and Refresh' if tired, and there were plenty of stopping bays along the way.

The signs were noteworthy enough for me to remember them for example, ‘Drowsy Drivers Die’ and 'Drive like Hell and You Will Soon be There,’ as well as all the other indicators of wildlife and ‘Cattle Crossing’ signs. If I remember correctly there were also two, or maybe three, Royal Flying Doctor Service-marked landing strips along the long straight road, in the case of an emergency air-lift.

The speed limit of 110km per hour was adhered to by the greatest majority of drivers mindful of the erratic movements of kangaroos, emus, goats, as well as cattle, and the traffic flowed along without a hitch on day one.

We stopped at the Nullarbor Roadhouse for the night where most people had already booked their lodgings so we had little, if any, choice of accommodation as this was during school holidays, where each state now staggers the holiday periods to avoid a uniform school exodus. After breakfast the following morning we continued our adventure.

Not far into the long stretch to the Western Australian border we wondered why an assortment of trucks, B-doubles and cars were slowing down and then stopping. We had no choice but to follow suit and soon we also had a long line of stationary vehicles behind us as well. Being a single carriage road (one lane each way), we saw that no one was coming from the opposite direction, obviously, the road was closed to all traffic. People started alighting from their vehicles to make enquiries and the commercial transport drivers with two-way radios kept us informed.

It transpired that a four-wheel drive vehicle had run off the road and overturned, killing its solitary driver. The fatality occurred at about 10.00pm the previous night and the traffic accident investigation unit of the South Australian police had not yet arrived to investigate the incident. It was now 9.00am and traffic had been building up since the previous evening to the uninterrupted four or more kilometre length of stationary vehicles. No one was going to go anywhere in a hurry!

Reports from the other drivers made their way along the road with plenty of conjecture from those speculating on the probable cause of the accident. No mention was made on the daily news.

It was between 3.00pm and 4.00pm that afternoon, some 18 or more hours after the event, that the police allowed some heavy transport vehicles to resume their course towards the East. For those travelling to Western Australia it would be a while yet before we could resume our journey. In any case, not before the wreckage was loaded onto a tray-truck and passed through eastbound with a police escort.

The image that I was able to take and which accompanies this story, led to more conjecture. There was no apparent damage to the front of the heavily fortified, solid vehicle that even had strong spotlights to indicate it was used in the outback, so a wildlife encounter could be ruled out, but there was damage to the full length of the left passenger side, indicating that perhaps the driver dozed off and running off the road had been startled into awareness, overcorrecting the path of the vehicle and spinning it into an 180 degree semi-circle, thus causing it to overturn. But an even more bizarre set of circumstances set us all thinking. The driver was a woman driving alone at night for how many long kilometres? Why? She had come through Bordertown and the Quarantine Station from where? She had passed many rest stops that would provide her with a respite from driving.

Her four-wheel drive was a very strong looking car that would surely have protected her from any possible outside attack. Was she in such a rush to get to her destination to risk a non-stop drive through the night?

As our line of traffic started to move slowly westward we noted an amazing addition to the road. A bunch of red roses wrapped in brown paper was placed across the section of the road where apparently this lady was deemed to have died. Who put them there? No one could just go to the florist to pick up a bunch of flowers! Did the deceased have red roses in the car with her? Or were they brought over by whoever came to remove the body?

We speculated for the rest of the day!

Other stories by Lidia Kardos 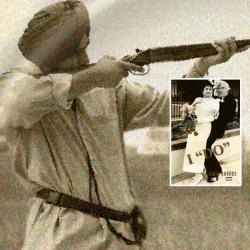 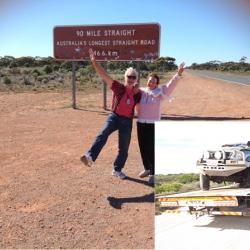