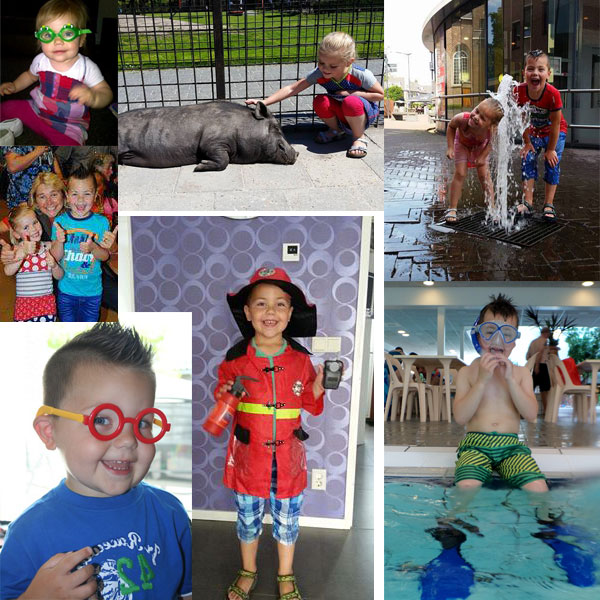 What is it about babies that always makes us go Ahhhhhhh? It must be their smiles, their innocence and the fact they do not talk back - apart from crying, that is. But when babies become toddlers things change a bit, the talking starts and we are very happy to hear the first word. Normally that first word will be dad or mum, but in my case the first word my son spoke was "Food!" He loved eating and food was one of the most pleasant things my son experienced in his early stages, so there you go, food it was. When toddlers start to talk they come up with the most hilarious words and sentences, like Riley who loves swimming and playing in the water. He is two and wants to play with the noodles all the time so he keeps on saying, "Riley nookie nookie". I do speak his language so I know what he wants, but for some bystanders "nookie nookie" is a great joke.

Then there is Patrick whose mum has told him the news that he will have another baby brother. Patrick is the third boy in the family and he told his mum to send it back because they already had two of them. He wanted a "girl brother" this time. Now here is someone who knows what he wants!

Jack tells me that porky pies are pies made of little pigs called porky’s. If you do not have little pigs then you can use a big pig, but it is only for family porky pies. "What happens," I ask Jack, "When you live on a pig farm and you have a lot of pigs, do you get more porky pies then?" "No," Jack said, "They just eat the pigs and there are no porky pies left." That solves this problem doesn’t it?

When it is summer time and the weather gets really hot we need to do things to cool down so a lot of parents take their children to the swimming pool. Dad tells his son not to run in a swimming pool area, which he needs to ask his son over and over again. The son has enough of dad’s interference and tells him he is not running, he can’t help it if his legs are always going so fast.

Mitchell is a great swimmer and ready to try anything and everything in the pool. He will come up with a butterfly stroke without arms, and freestyle because you can choose your own way of swimming. "If you drown it is not funny," he says, "because you miss out on the good part of swimming, which is play time." He told me the reason you cannot do a dead man’s float when you are five is because you are only a kid. That makes sense to me.

Sally comes in and wants to know what we will do today so I tell her we will practise our breaststroke. All of a sudden Sally starts crying and sobbing so I ask her what’s wrong? She stops sobbing for a moment and says, "I cannot do breaststroke because I am only four and I do not have breasts yet!" Pamela Anderson in the Baywatch show on TV must have been a heck of a breaststroke swimmer that’s pretty clear now!

Mick has to get some things off the bottom of the pool so he can practice his diving skills. After a few weeks of trying, he thinks he is ready now. He notifies me he has to to take his “gobbles” off underwater otherwise he can’t see. And I always thought the "gobbles" were there to help you see? Maybe I was wrong.

Max is curious in everything he does and he keeps asking questions about things. Why do dragonflies stop on the side of the pool? I tell Max they like resting. So Max tells me they’d better have a chair 'coz they get wet where they are now. "Why are you wearing shoes in the pool, Evelyn?" "Because I am in the pool a long time," I explain. Max says, "Oh, I understand, it is so your feet do not get dirty." When another client comes in, the client was born in Kenya, Max looks at me and whispers, “Evelyn, she is black”. Immediately he tells me he hopes she is not going in the pool because it might wash off. It might take a lot of explaining before Max is satisfied with the answers. My client from Kenya has a great sense of humour and she laughed out loud after I told her the story. She asks after Max every time she comes in for her class.

Charlotte comes in with her little sister, Naomie. The sister is only 18 months and Charlotte tells her the facts and rules of the pool. I hear her say, "It is dangerous to jump in the shallow end of the pool because you might break the bottom of the pool." I am glad someone looks after my pool.

Alicia is 3 years old and she loves coming into my backyard pool because it is so nice and quiet. In other pools Alicia said it is, "So noisy your ears will hurt because of the screams." and she likes her peace and quiet. Her brother is five months old now and he loves swimming, Alicia tells me, "he learned when he was in mum’s belly." So I asked Alicia if she learned in mum's belly as well? "Of course not," she replied, "I was already born then!"

When you go diving that means you are jumping with your legs the other way up.

Lexie went on holidays with her parents to a far away land called “ Awaii” and they went in the sea with a man wearing water glasses over his eyes. "You had to wear gobbles and slippers as well," Lexie told me. She also stated that when you go under water you blow bubbles like you fart from your mouth. Lexie also explains to Naomie that you have to close your mouth when you go underwater otherwise you will drown on the inside. I will ask in a few years whether Naomie understood all this.

I have three brothers in my swim class, Connor who is six and his two siblings Max and Ben, who are twins and only 12 months old. Connor said Max is older because he came out first and Ben wasn’t quick enough. If Ben would have come out first his name would be Max, are you still with me? I ask Connor what he wants to be when he grows up and the answer is simple, "Bigger." I also ask Connor why his brothers are twins and what that means being twins. Connor lets me know, "When you are a twin mum and dad didn’t know how many children they want so they had two in one go. Their brains are split in half and both of them share." I have been told that people from Tasmania have two heads, but this one was new to me. I wonder how the twins will go when they go to school? I guess we just have to wait and see.

The thing I love about children is that they say what they mean, and they are very honest. If I tell the story about my birthday in a swim class with 6-year-old kids, I tell them I have just turned 12 years old. They just look at me and smile until one girl says, "But you drive a car and the police hasn’t pulled you over? My mum is 32 and she got pulled up the other day because she was speeding, but they didn’t ask her about the glass of wine she had before." This one is a police officer to be. When I tell them I was telling porky pies and that I really turned 85, the same girl cries out, "Oh, it’s ok then, you are allowed to drive a car."

I have also been told by a five-year-old that if I am a Nan I can’t have any babies anymore. So I get very curious and ask how old you must be to have a baby? The answer shocked me, "You can not live with your Mum and Dad, you have to be married, you need a babysitter and you have to have left secondary school before you can have a baby." So I said, "OK, where do I get a baby from?" Without blushing the five-year-old told me, "At Coles," and "They have specials all the time." I must say going shopping has never been more challenging for me! I wonder if the other shops have the same specials or maybe half-price?

For three decades I have done swimming lessons and sports programs in different countries and kids are kids all over. Jimmy said he speaks other languages as well, but people do not understand him because they haven’t practised this language yet. That is another way of looking at things.

I want to thank everyone in this story for all the laughs I had, and I promise to keep all your statements a secret. I will ask everyone next time what a secret is - and I'll bet you we will get some pretty amazing answers.

To all parents out there that have babies and toddlers, think again before you teach them how to talk and what to say, one day your stories might be out in the open. In the meantime, look after your precious ones!