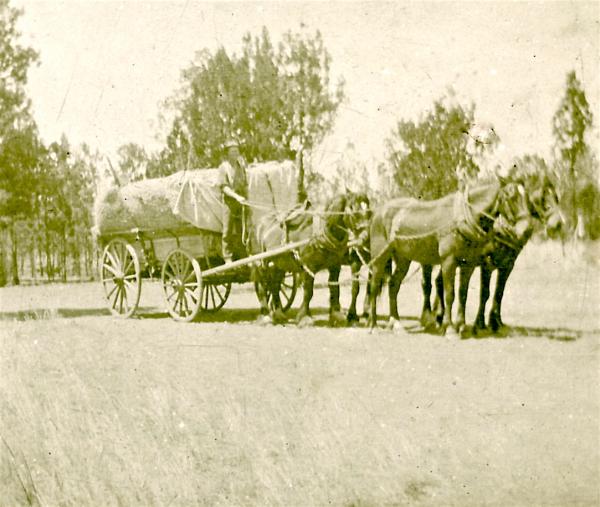 My father told us he was born in 1913 at Ouyen Hospital and after that lived in a tent on his father's farm at Boinka. The photo above is of grandpa on his farm. I had always wondered where that farm was but there were no clues in any family documents. So on a rainy day last winter I decided to search the Internet for any help.

I knew my grandfather, Robert William Leary migrated to Australia in 1910, and after working on the tramways in Melbourne for a short while, had gone up to the Mallee on an invitation from Mr Cuttle to work in his store at Ultima. Sometime after that he had taken up a farm allotment.

Using the National Library of Australia's website "Trove", I searched through Victorian newspapers of the years 1910-1912 for any articles containing appropriate words such as "Boinka", "Leary", "allotments", and so on. To my great surprise I found the following article.

Going back onto Google Maps I soon found the Manpy area showing Linga as its centre. On satellite view the fences of the allotments are clearly shown and are exactly as they were on the 1922 survey map. Boinka is the closest town to Allotment 14 and this probably explains why the farm was described as being at Boinka.

The satellite view also shows how dry and infertile the ground looks. My grandfather cleared his square mile of Mallee scrub and planted several crops, but after about three years of hard toil with no returns he walked off and resumed work for Mr Cuttle in his store at Waitchie. Later he moved back to Ultima and worked again for the Cuttle's store there until about 1939.

The directions facility of Google Maps informs me it is 5 hours and 35 minutes by car from my front door in Camberwell to grandpa's farm on Crows Road, Linga. It's a trip we look forward to doing in the cooler months of next year.