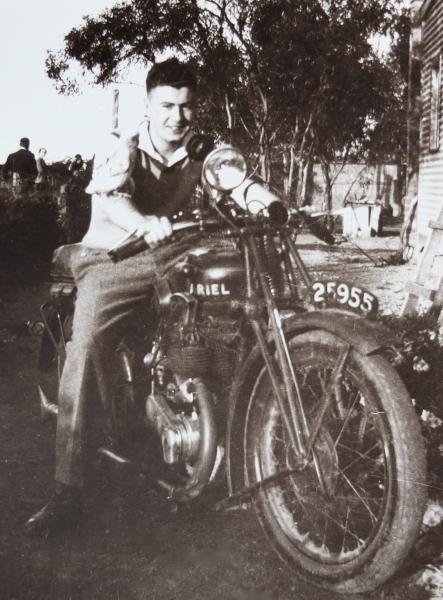 When dad was fifteen he secured a job with the Manangatang branch of the ES&A Bank. His main mode of transport then was by motorbike. He owned several old bikes which he worked on to keep at least one of them in running order.

Given his interest in bikes, dad wrote away to a motorbike shop in Melbourne seeking a glossy brochure on a new bike, but with no intention of buying one given his meagre finances. One weekend not long after, dad was informed there was a bike salesman at the pub looking for him. The salesman had ridden up from Melbourne on a new bike to demonstrate and hopefully sell to dad. Luckily one of dad's bikes was going and he hightailed it back to Ultima for a surprise visit to his parents.

In the 1930's, when dad was to be transferred to Melbourne, the local policeman said "Ivan, you'd better get your car licence before you go to Melbourne because they're pretty strict down there". It would appear that dad didn't have a licence at this stage as neither he nor his father had ever owned a car. Dad agreed and they went in the constable's car for a driving test.

Not too far down the road dad accidentally drove off into a clump of bushes. The constable changed seats with dad and said, "that'll be fine" and drove back to the police station to complete the licence paperwork. A few years later in Melbourne when dad purchased an old car he taught himself to drive.