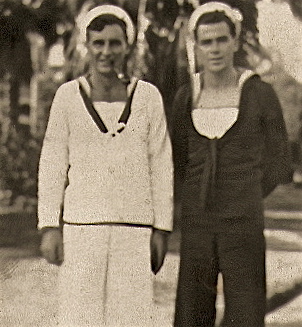 My brother and I never knew much about Athol - our mother had told us it was sad for dad to talk about him, so we didn't ask questions. All we had for reference was a framed picture of Athol in his sailor's uniform and a watercolour painting of the HMAS Perth. After my father died I gained access to photographs and other items relating to Athol. I've also found a number of newspaper articles relating to Athol via The National Library of Australia's website "Trove" which contains digitised copies of newspapers published in Australia.

Athol attended Ultima primary school. From photographs of school sports teams it appears he was a keen athlete from an early age and this continued after he left school. He competed as a sprinter at various country athletic meetings and was also a competitive cyclist.

Athol worked as a hairdresser for Bob Gundlack's hairdressing establishment in Dillon Street. I have a newspaper cutting from January 1939 depicting him lathering up a customer in the backyard after the hairdressing salon burnt down.

It appears he had an interest in building radios as I found a number of entries in the "Anything to Exchange" sections of the Age and Argus newspapers, where he was trying to swap radio parts.

Athol served in the Royal Naval Reserve and in February 1941 was mobilised to HMAS Lonsdale and eventually in November to HMAS Perth. In February 1942 the Perth sailed from W.A. up to Indonesia where she met Japanese destroyers and in the ensuing battle was sunk on the 1st of March in the Sunda Strait. Surviving sailors, who became prisoners of war working in the various Japanese labour camps, visited my grandparents after the war and told them that Athol was working down in the radio room when the Perth was hit.

The photo above is of Athol (on the right) taken with Ray Parkin in Kings Park, Perth, on the 11th of February 1942, just 17 days before HMAS Perth went down.

The watercolour painting of HMAS Perth hanging in my father's bedroom was painted by survivor Ray Parkin who gave the painting to my grandparents after the war.

Athol is commemorated on the War Memorial in Dillon Street, along with the many other Ultima war heroes.