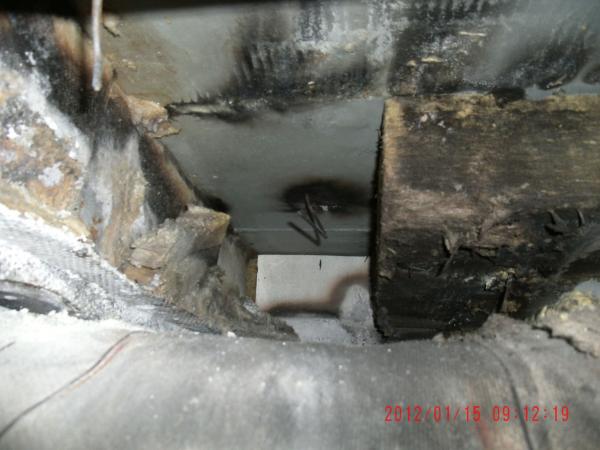 I was in my cabin which adjoins the engine room via the engineers office when I was hailed by the engineer of the watch (Ken, Chinese, and Number 1 good guy). Ken had in one motion opened the door to my cabin, yelled "Fire Fire Fire" at me in Mandarin (which was real good because I understand two words of Chinese and "fire" is NOT one of them!) ..........and had pulled the phone off the wall ripping the wires out of it in his haste to inform the rest of those awake at 2330 in the evening.

I was in my usual sleeping attire which is a carry over from my youthful "ever ready" days. I quickly donned a towel and entered the engine room in three steps whereupon I was pointed to an area between the Port Main Engine exhaust and the Deck Head (Ok..... "ceiling" for the not very maritime minded..........).

It did not take me long to see the two or three square feet of the aluminium Deck Head lining (whoops, ceiling) which looked a lot like those sparkler thingies we used to get on Guy Fawkes Night. Only, about 500 of them all lit at once.

This was right next to a Extraction fan shaft and all the smoke was being sent outside, no smoke detector could have sniffed it, so this had the potential of 100% nasty double plus.

By this time all of thirty seconds had passed, Ken the Chinaman was doing the right thing and piling the fire extinguishers up very high at my feet.

I started to go back to my cabin to chuck on a pair of "ovaries" and passed the phone on my desk. Seeing the wires detached, I immediately knew what had happened so I quickly plugged it back in and called the boys on watch "up top".

Put on a pair of "Ovaries" went back inside and selected an appropriate extinguisher from the pile provided by Ken the Chinaman and went for it!

By now two or three minutes had passed and my Number two Engineer, the Filipino guy whose name is "Gopher" arrived on the scene.

This made me very happy because I knew if I wanted a 17/64" wingwong with a left-handed 180 degree kryptonite handle he would find it for me in ten seconds.

But only after asking if I wanted it in Green Kryptonite or Gold Kryptonite.

About another minute passed and some of the "up Top guys were" beginning to gather enough confidence to come in for a look see.

By then, I was finished with the dry powder extinguisher, the CO2 extinguisher and reckoned it was time for the garden hose.

Having put out the burning Aluminium (from memory it burns at 1020 degrees if it has enough air...which was being conveniently provided by the vent fan next to it) ...............we now were faced with the problem of pulling apart the super-heated area and cooling it down, Enter the crowbar and garden hose. Dig a hole with crowbar in the aluminium, stick the garden hose in there and let her rip!...

Eventually got happy with result and went to bed. Sleep didn't come easy that night!