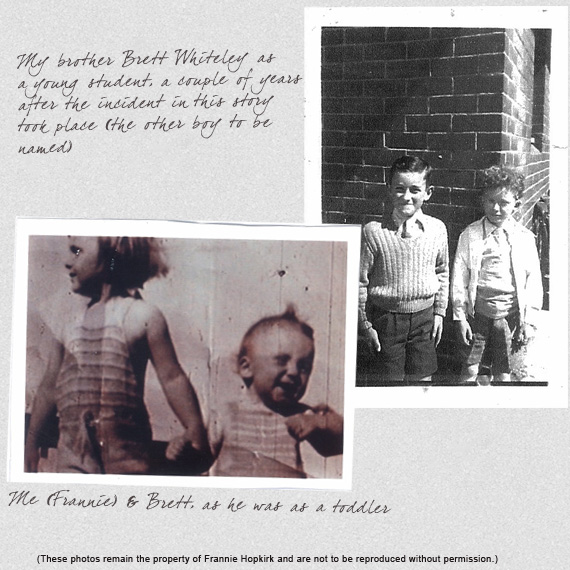 Why, exactly, two small children and a dog were on the end of the Longueville baths that day, I do not know. In retrospect perhaps we had been told to stay on the beach but a brand of Whiteley anarchy had put us in danger. Perhaps it was my fault for not taking better care of my young brother. Whatever the reason, the events are indelibly inscribed on my memory. The blind, screaming horror of it is as vivid as a freshly experienced nightmare.

My brother was probably four, a very small four. I, two years older, was six. Our dog, Billie, an excitable foxie. Our father was out in the middle of Woodford Bay in our row boat, fishing or bringing in a net. Of this I am not certain.

My brother and I were on the end of the long wooden walkway of our local baths. It was a high tide, the baths were full. We were watching our father and fooling around with Billie when suddenly the dog became over excited by a flock of sea gulls who were making sport with him. He was doing wheelies on the end of the baths and barking the way foxies do when over excited.

In an instant the dog had knocked my brother into the harbour, on the outside of the baths. In total terror I watched the tiny curly ginger head disappear beneath the murky water.

I began to scream to our father, now way out in the bay, barely within hearing. All he could see across the expanse of water was his daughter jumping up and down and the dog barking furiously. With these sounds coming to him on the wind, he also saw that someone was not there - a very small boy, his son.

He commenced rowing in a wild and terrible panic. The bay was very choppy and he was battling against this is an unsympathetic and clumsy old row boat.

Suddenly he lost an oar. He was then trying to get to us with one oar. Quickly realizing the futility of that he dived from the boat and started swimming. I shudder to remember the sight of him thrashing through the water toward us, his stricken family.

Billie was still shrieking and I was screaming even louder as my brother's head had reappeared for the second time and gone down again. The sight of his mouth gasping for air and filling with water too terrible to think of all these years later. As inevitability set in, I understood that our father may not make it in time. He was a powerful swimmer with massive shoulders, chest, and arms but he seemed so small and helpless on that wide unforgiving bay. His weak lungs too, would have been working against him. (My father had suffered from TB.) There were no other people around, we were quite alone as the drama unfolded.

Finally, as the little guy had gone down again and not reappeared, our father reached us. He immediately dived, soaring back to the surface like a whale with a tiny red fish on its snout. The child under his arm was gently heaved onto the deck at my feet. Without the benefit of a ladder he scrambled and clawed his way up the side of the baths which were thick with barnacles. (People scraped barnacles off boats but not off the sides of old harbour pools.) With his arms, legs and hands flowing with blood, he went to work. He pumped and pumped, gave him mouth to mouth, all the time howling, crying and trying to get his breath. There was no response.

The afternoon had become deadly still and quiet, the only sound other than the gentle lapping of water on the side of the baths, was my father's despair, and it was terrible to hear.

He kept pumping and breathing into his son's mouth but the normally noisy child remained still and silent. Never again in my life did I hear such silence. The dog had stopped barking, I had stopped screaming. There was blood everywhere. A truly ghastly and sinister scene was unfolding.

From the quiet a small spurt of water came out of the boy's mouth. Then a splutter, then a cascade of coughs. Daddy picked him up in his arms, crying and sobbing. His son had survived.