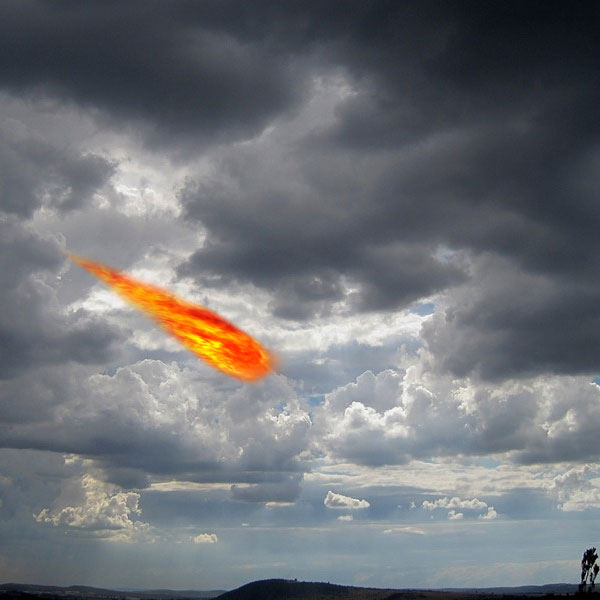 There's no one more likely to experience electrical phenomena than Ian. Which makes him a sort of phenomenon himself, really.

Ian, also known as Cha Cha, hasn't actually been struck by lightning but he has experienced a fire ball at close hand, twice. And once his white goods were so badly damaged by a lightning strike that none of them worked again. He's also seen, at close hand, those strange pink lights that were pictured on the front page of The Herald Sun many years ago. And what was that green light that made him race, heavy suitcase in hand, 3kms along the Murray Valley Highway to the first place he could find shelter, the Swan Hill Drive-In?

It was as a young boy while he was running along the channel in Swan Hill that he experienced his first fire ball. He was trying to get birds to chase him, or something innocuous like that. The day was overcast and he saw an arc-shape light in the sky. Suddenly a ball of fire came shooting out of the sky at such speed that he was forced to dive to the ground.

The second time he saw an arc of light was when he was walking back to his house with his wife and son. They were in the middle of a quiet country road when a fire ball shot out of the sky and then up this street. Other people who witnessed it said it went round a corner, smashed through a window in the local primary school, smashed its way out a window on the other side, then went back up into the sky again where it exploded.

It was when his wife and son were sitting in the lounge room watching telly - he was looking out at the garden from his back door - that a bolt of lightning hit his chimney. With a bang his white goods were rendered inoperable, including the telly his wife and son had been watching. When Cha Cha got to the lounge he found them sitting in a state of shock with soot covering their faces.

But I skip too far ahead. Cha Cha experienced a strange green light years before after he had hitched a ride from Sydney on a truck heading across the Hay Plains. He had gone past Swan Hill, his destination, when he alighted and was making his way back down the Murray Valley Highway. Waiting on the side of the road for his next ride he became aware of something very, very cold beside him. Slowly he turned and came face to face with a green light. It was in the cast of its glow that Cha Cha decided his legs would be his next mode of transport and picked up his suitcase and ran as fast as his body would carry him.

Some say there are a lot of green lights around this area, because of phosphorus. But what could explain the drop in temperature too?

Cha Cha wasn't alone in seeing pink lights, these were so widely sighted images of them made front page news. I think I recall him saying that they moved too...but I'll have to speak with him again to find out for sure.