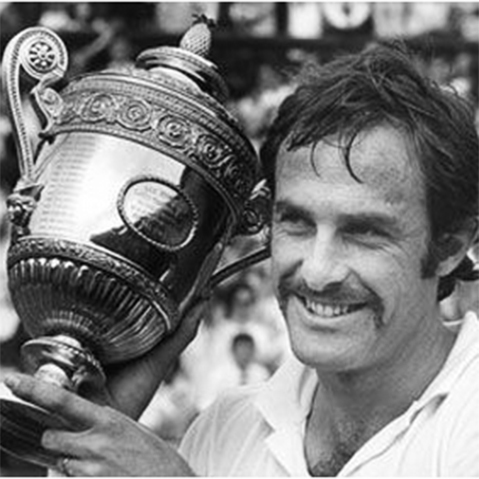 This makes the second story in a total of three so far in which I make a point about the weather. So let me say that I'm not normally so preoccupied with it, but today is an exception as we are going to the tennis at Memorial Drive, and in taking our seats close to the front of the Northern Grandstand, we are exposing ourselves to a sun which on the local news last night was shown to fry an egg within a few seconds. And it's here, in this egg-frying sun, that we will remain for an entire afternoon.

Out of the small holiday allowance given to us by each of our parents, we have just purchased a programme for a relatively vast sum. We sit flicking through the pages regarding it as more than a souvenir, because today we are going to fill it with signatures, and it is on this basis that this little book is now something of an investment.

The friend I am with has had a raging prepubescent crush on John Newcombe for some time, and everything about him (with the exception of his wife, Ange) has been the subject of drool, his height, his moustache, the way he moves, the way he speaks...his clean hair. It is this endlessly attractive array my friend expresses succinctly as, "Ooooogggg". And today John Newcombe is here, in his crisp white shorts. And we have our pens ready.

The match that is in progress churns away, slowly. (We hear from my friend's father later that we were on television at this time, "I'd know Balsarini anywhere," he says, suggesting even the cameraman must have been bored.) Finally we get our chance and peel ourselves off our seats, we are off to find John Newcombe - as soon as we've had an ice cream.

By the time we arrive at the gate which separates the players and staff from the crowd, another match has started. Somehow we make our presence known against the canvas wall and a tennis player opens the gate, looking down. "Can we get an autograph?" I ask. In a hushed voice he tells us a match is in progress and we nod silently. He tells us he will let us in if we are quiet. We nod silently. He opens the gate and we go in.

I'm not exactly sure what happened next, it all seems a blur. Whether it was my friend's, "Ooooogggg" or because we were in the presence of John Newcombe's star, I asked at full volume, "Can I have your autograph please?". And like the sportsman that he is, he signed our programmes, and this was the image that I saw.