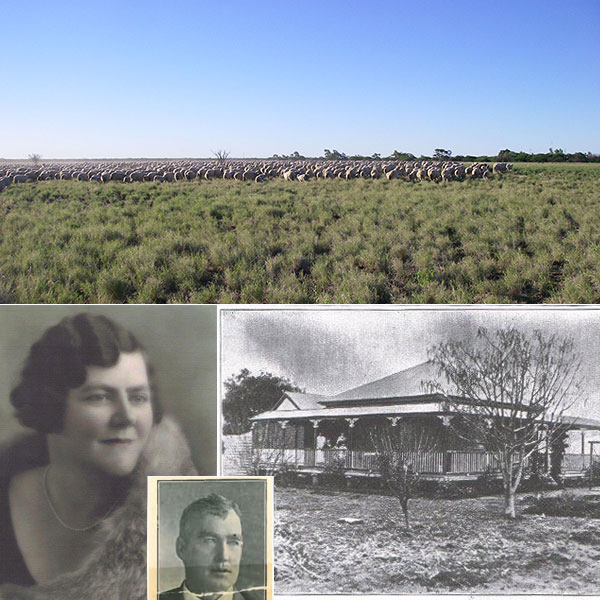 Boy was born in 1912 but didn't live past three,
He died from loss of blood, a gunshot wound to his knee,
No Flying Doctor service then to come and save his life,
For Bea it was the start of many tragedies and strife.

Dorothy, born in 1915, was only three months old
When Boy went to his maker so the story's told,
Steve arrived in '17 when the sheep were breeding well,
These were good times in this country, though elsewhere WWI was hell.

Wool was needed for the uniforms of soldiers fighting far away,
Australian sheep provided this and mutton, greasy grey
Was put in tins marked bully beef on which the troops dined every day.
The Abbotts prospered, life was good until that fateful day.

Tragedy struck the family again when Charlie died too soon,
While working on a windmill the wind picked up 'round noon,
A mate brought him to the homestead with a sack upon his face,
Bea was left to cope alone with little help to run the place.

Bea then married Snowy Fraser from the property next door,
They ran Abbotsford together until he too was no more,
A burst appendix was his fate, Bea was left alone once more,
To cope with life's tragedies as she had done before.

Dorothy left in '36, her own life to pursue,
She took up nursing at the Mater until the start of World War Two,
In '42, Toowoomba was where she met the man she soon would wed,
Keith Walker was a handsome man who quite soon turned her head.

When Dorothy left for Brisbane to take a nursing role,
Steve took over Abbotsford and increased its yield threefold,
Together he and Bea improved the station shed by shed,
Then he met Pat, his lifelong mate, to whom he soon was wed.

Keith and Dorothy had a daughter the year after they were wed,
Robyn was their golden bundle who never would be led,
Then Keith was sent to Moratai with his army unit mates,
To map and survey battle sites where so many met their fates.

When Keith was discharged from the army three more children they begat,
Jenny, Ross and Julie joined Robyn and her cat,
The family lived in Kulpi on a small fine dairy place,
Then moved several times as the family grew apace.

Robyn was the first to leave the nest, off the England at nineteen,
Jenny was the first to marry, Julie went to university,
When Ross left the family home, Keith and Dorothy moved,
Bought a house in Redcliffe and that's when Keith retired.

Keith died of a sudden heart attack at the age of 68,
Dorothy was left a widow, and moved to meet her fate,
Miami was the place she chose, and met Andrew her next mate,
And together they did travel, overseas and interstate.

Steve and Pat had children three, Charles, Tommy and Jane,
Pat was a strict mother and raised them to be brave,
For outback kids are hardy, resourceful and run free,
Live lives that city children would rarely know or see.

Steve died suddenly at 52, his heart had given out,
Son Tommy was the next to die, his short life put to rout,
When the plane he flew to Townsville crashed, killing five on board,
A thunderstorm the culprit, the tragedy deplored.

Then Charles moved down to Warwick with Lyndal his dear wife,
They left Abbotsford permanently to begin another life,
Leaving Pat and Jane to run the place, the men around surprised,
As herstory repeated the life Bea and Dot survived.

Jane soon married Brendan, a fine upstanding man,
He came from north of Hughenden and the station they both ran,
Daughters Anita and Rachelle arrived to complete their family team,
Now they carry on traditions and live the Abbott dream.

Last century has dealt the Abbott family droughts and flooding rain,
But they prospered in the good times, survived tragedy and pain,
May the next generation keep the line proud and strong,
To fulfill the ancient journey of a breed that's not gone wrong.

The Abbotsford centenary muster was a typical outback affair,
Two hundred guests made the journey so that they could be there,
With the shearing shed scrubbed, assorted decorations in place,
Tables were spread with red and white cloths, but luckily, no lace.

Glasses gleamed in the light as family and guests enjoyed the night,
Helpers came from the town, the alcohol flowed, the food was just right.
At height of the do a splendid storm brought thunder, lightning and rain,
To test the fortitude of the outback folk; may their optimism never wain.