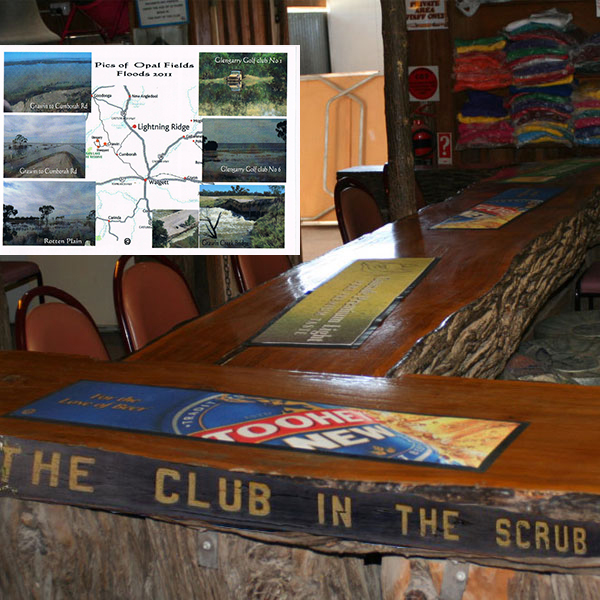 There's an opal field called Grawin way out back of Lightning Ridge,
It's hard to get to at the moment as there never was a bridge
'Cross the flooded Barwon River where the floodwaters still flow,
Eighteen months it been now, and the locals still don't know
When the Camborah road will open so they can get to town,
It's getting pretty tedious going the long way round.

Grawin's been mined for a century since black opal was discovered
By a couple of fencers digging holes and after they'd recovered,
They quietly set about staking their own claim
Before the news leaked out and others did the same.
Soon hoards of miners dug opal pits, mullock heaps dotted the land,
Noodlers followed each discarded heap, some finding opals, others only sand.

Some miners come here to disappear from abandoned wives or the law,
Others, seeking adventure, find life here never a bore,
Most eschew the city life though once they thought it grand,
But they oft frequent the local bars after giving each other a hand.
Hundreds of tin sheds are built to house those who choose to stay,
No building permit needed but an annual license fee to pay.

Grawin's a place for those people who reject the social graces,
A place where men wear beards to cover up their faces,
Where one can be anonymous, who don't tell their last name,
But a place where outback hospitality really lives up to its fame.
Help is always given to those who are in need,
Be it assisting the new miners or giving them a feed.

It's not so easy to tell the wealthy from the poor,
For everyone seems equal, except ratters whom all abhor.
Bush justice is the law out here, the cops are far away,
But if the law is broken there's often hell to pay,
Especially for ratters who are apt to disappear,
When nabbed in action stealing what miners hold most dear.

Real miners keep their secrets close, they know it's vain to tell
When they've struck a vein of solid opal deep within their well,
For big ears might be listening and find what's being hidden,
And stealthily in dark of night might steal the cache unbidden.
That's when the old timers tell tales of crimes gone before,
Alluding to past thefts like a dingo covered in gore.

When a tourist bus comes by, off the beaten track,
Those with stones to sell will load them on the back
Of a ute, to let the visitors buy a souvenir from Grawin's fields,
Proud to display their smaller finds but quiet about big yields.
Those with talent for cutting opals and creating jewellery,
Show visitors their craftwork, perhaps they'll sell a piece or three.

One of Grawin's icons is called the Club in the Scrub,
A social hub that serves the camp as a place where shoulders rub,
Meals are served on odd days, or you can get frozen miner's grub,
Booze is served in bottles, no draught beer in this club.
Some men and women here look a bit the worse for wear,
But have hearts as big as melons when it's time to show they care.

Noodling in the mullock heaps keeps some occupied for days,
Searching for those elusive stones reflecting rainbow rays,
Mostly though it's only potch buried deep in a rock pile,
But now and then a stone's unearthed that makes it all worthwhile.
It's an addictive pastime sifting potch, surely worth the time,
But it's finding opal chips that gives a thrill some call sublime.

Why would anyone come to Grawin with its heat and flies and dust,
Surely not to catch the opal fever which is bordering on lust.
It's the open sky, the pioneer feel, the mateship and the fun,
For what's life without a hobby when all is said and done.
When one's life is filled with meaning from sun up until sun down,
Then life takes on a purpose, whether in the outback or a town.