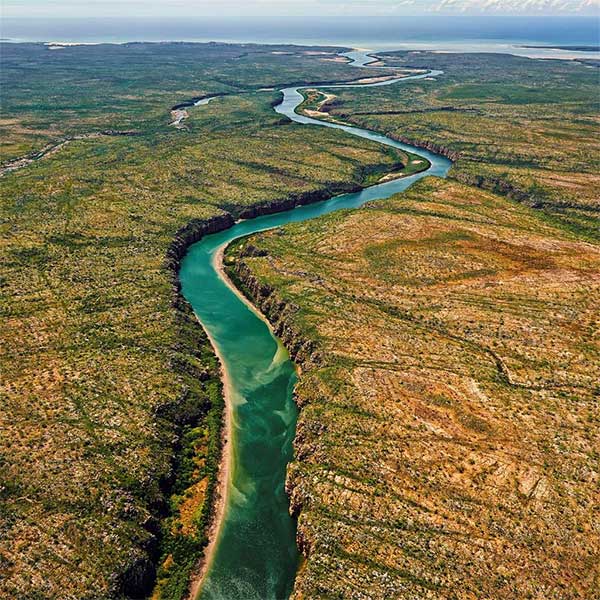 There was stillness all around her as Moongara gently rocked
On the silent Berkeley River as smooth as if she’d docked.
From Darwin ‘cross Bonaparte Gulf she’d been more than ably sailed
And now the crew was reminiscing about what that had entailed.
Stretched out and sipping Champers, they talked of the past days
Spent cross open waters rough with windy sprays.
It had taken nearly sixty hours against a capricious tide
But their spirits hadn’t faltered as they watched the Southern Cross, glide
Westwards ‘long the Milky Way on its nightly grand foray
Until two hours before sun up, it sank ere break of day.

The crew lay down upon their bunks for a well-earned lengthy doze,
As they dreamt of Kimberley adventures, a Hathor moon arose.
But soon they had a rude awakening …. they thought ‘We’ve run aground?’
The skipper rushed out on the deck and yelled, ‘We’re stuck fast in the sand.
We’re listing hard to starboard.’ And with that the little band
Of novice northern yachties climbed from sleep on to the deck
To observe their proud Moongara about to be a wreck.
The skipper grabbed the dinghy and with ropes attached he raced
To anchor her from either side to ensure she was well braced.

The water from the Berkley raced crazily past the stern,
Her keel became embedded in the sand, much to their concern.
A watch was kept for snapping crocs upon the drying bar
In case they searched for stranded Berks under the morning star.
On grounded yachts there’s naught to do but wait to get afloat,
For tides will always flow back in – a fact that seemed remote.
Firmly wedged, Moongara’s keel was stuck in sand so deep,
That, after doing the washing up, the crew went back to sleep.

Next morning with the yacht afloat three crew decided to explore
A rocky creek and waterfall they’d spied the night before.
On flowing tide the zodiac chugged until it reached a rocky ledge,
To which they tied the little boat with an anchor- shaped wedge.
The dinghy moored, the laundry washed, the Berks went off to see
If they could find a pool in which to swim, play and frolic free.
They frittered away the passing time until someone said, ‘It’s late.’
But once again, the Berks had forgotten that as nature’s laws dictate,
That after every tide come in, it always will abate.

To their dismay they found the boat three metres ‘bove the edge,
It was stranded high and dry, on a sharp and rocky ledge,
For hours they watched the rushing tide hide oyster covered rocks,
But the sun sank faster than the tide arose….and what about the crocs?
Forgetting to pack the insect repellent was another little glitch,
As sandflies in their millions caused excruciating itch.
‘Alas, alack and woe betide,
What are we to do?’ they cried.
‘We have no food, no light, no Bundy,
No line to catch a Barramundi.’

Decision time – to stay the night huddled under a small green towel,
Or attempt to lower the dinghy into the dark and surging bowel.
Amazingly they did it as sharp shells ripped its side,
And when it hit the water they quickly jumped inside.
They raced along the tranquil flow of the sunset reddened creek
To get back to Moongara before the air oozed out the leak.
The skipper who’d remained on board, thought they might have come to harm,
But a glass or three of red soon restored his calm.

Next morning, the intrepid Berks set sail up Berkeley River,
For Casuarina Creek, ‘tween towering cliffs had promised to deliver
A berth next to a waterfall, giving longed for peace and rest,
Before the crew climbed up to explore the cliffs with renewed zest,
They gazed around in wonderment with a wary eye for crocs,
And found some baffling Bradshaws concealed amongst the rocks.
They swam in pools with waterlilies where the ancient ones had been,
Who’d dreamed about strange creatures then painted what they’d seen,
For adorning a rock overhang was a prehistoric Thylacine,
And told stories as the sun set to explain what their dreams mean.

Refreshed, renewed and full of joy they left those sacred spaces,
For again the ocean beckoned them to find more exciting places.
Past Hector the croc they sailed to the sea and westward they did turn
Plastering sunscreen on their faces to prevent even more sunburn.
Moongara left the Berkeley on a fast out-flowing tide,
The four crew not yet knowing they were in for a bumpy ride.
The wind increased, so did the waves, the sounder went up and down
Showing one metre then four below the keel as the bar churned sandy brown.
Soon one succumbed to mal-de-mer, and chundered far and wide,
Not caring if she hit or missed Moongara’s green port side.
She crawled into the quarter berth and wished God to set her free
Whilst the other three sat unperturbed and ate a hearty tea.

All night they blew across Broome Bay, and next morning were astounded
As they found that yachts already there had them quite surrounded.
All convoyed up the King George River, then ate a curry lunch
Perched on a ledge by rushing falls – they were a cheerful bunch.
Those fifteen northern yachties were sprung partying on rock shelves
By a group of forty cruise-ship folk who thought they had the river to themselves.
Surprise reflected on their faces as they snapped the happy crews,
This wasn’t in their brochure but it made exciting news.
Under a brilliant sky of azure blue which belied a cauldron rip,
Moongara left the King George on the next stage of her trip.