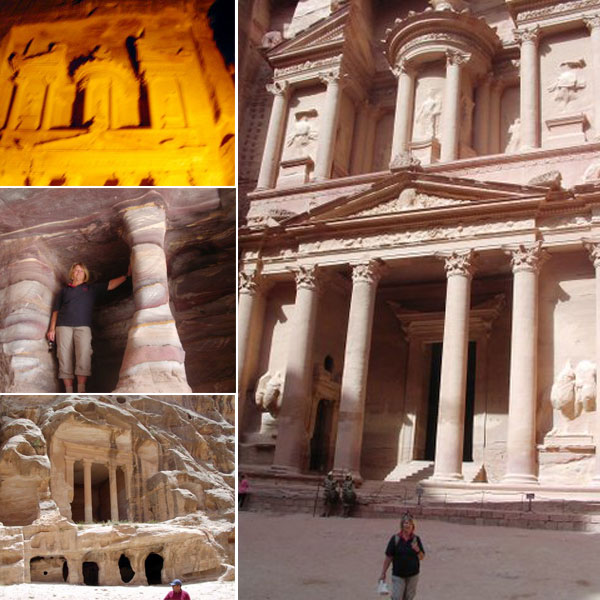 Pilgrims come from many lands
To traipse across the ancient sands.
They feel the air, and breathe in sounds,
From times long gone but still abounds.

Jerash, a ruined Roman city, once so fine,
Dotted with temples to the Gods divine,
Now tumbled into chaotic blocks of marble,
Some partially rebuilt to recreate past fable.

Petra, the rose-red city half as old as time,
Lit by a thousand candles in an atmosphere sublime,
To walk its Siq under a starry sky
Gives rise to a wonder one cannot deny.

Hewn from a sheer rockface by Nabatean masons,
Temples and water channels with a myriad of basins,
Soaring columns capped by Greek-style capitols,
Cool caves made into dwellings became adaptable.

Wadi Rum, stark landscape of Bedu nomad fame
Dry and parched through lack of rain.
To sleep in stuffy tents of woven camel hair
A million star resort surrounded by rocks so bare.

The Dead Sea levels sink each year
But it's fun to swim in without fear
The buoyant water steeped in salt so thick
Makes it impossible for swimmers to sink.

Flying to Iran over an arid, desolate land
Nothing below but many miles of sand,
How could a major civilisation flourish
When water is scarce, with few crops to nourish.

Tehran, a thriving bustling metropolis
Millions of people, friendly and accomplished,
Traffic chaotic, but seems to flow
Around foreign pedestrians afraid to go.

Yazd, a city from far ancient times
Full of tiled mosques and ornate shrines,
Showed off its crumbling mud-brick places
Once home to such a myriad of races.

Shiraz, of cultural and carpet fame,
Really lived up to its name,
Home to mystics, poets and shahs
Persian gardens and vast bazaars.

Great Persepolis built by Darius in 518 BC
Has long been on my list of ruins to see,
Burnt to the ground by Alexander the Great,
Even it could not prevent such a fate.

Close to Persepolis stands Naqash-e Rostan,
Rock hewn tombs of Darius and his son
Mighty Xerxes, famous in both deed and word
Now silently watching, no longer the lord.

Grand Parsgadae, built by Cyrus the Great
Has little to show now but columns that wait
For skilled archaeologists to reveal the plan
Of a vast city once built and destroyed by man.

Esfahan, guarded by the Koran Gate,
With grand tree-lined boulevards that make
Wandering this city and finding its treasures
A reminder of times gone, with days full of pleasures.

The enormous Imam square, second only to one,
Built by Shah Abbas, with a polo field under the sun,
With its huge spice-scented alcoved bazaar
Surrounding the square, full of goods from afar.

Next on to traditional Abyaneh set high in the mountains,
Adorned with mud brick walls and glorious fountains,
Life is slow and simple here, but the locals are old,
For most young have long fled the confines of the fold.

Ancient Kashan, full of old mansions once proud,
Home to rich merchants who traversed the Silk Road,
Tile adorned mosques, serene in their way,
The fine Garden of Fin invites visitors to stay.

The ancient Goddesses who once fertilised this land
Are deeply asleep with nowhere to stand.
Few worship them now with garlands and flowers
In valleys or temples with rose-covered bowers.

Soon they will awaken, for the time has arrived
When again the Divine Feminine will reign side by side
With the masculine world so powerful and strong
Who will realise that they have gone so dreadfully wrong.

Return to the traffic and chaos of Tehran,
Last minute shopping, sights and sounds of Iran,
Mahdi, our guide, invited me to spend time with his family,
At his weekend retreat, near the Caspian Sea.

Iran is a land of welcome and smiles,
Long distances covered as our bus ate up the miles,
Travellers who visit will get a pleasant surprise,
And gain understanding of this land that the world vilifies.

Jordan
Israel
Egypt
Iran
Petra
up
374 users have voted, including you.