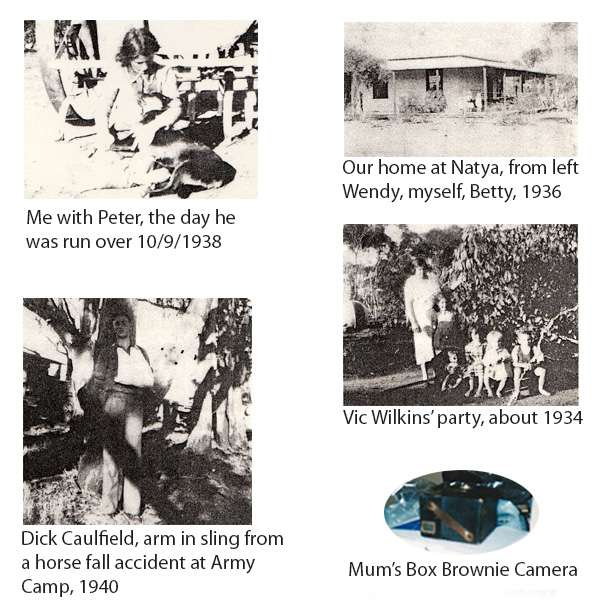 The year would have been about 1932 and my parents, who were pioneer wheat farmers at Natya in the Victorian Mallee, were having tough times. Wall Street had collapsed and my parents had four children in four years - all drought years - when there was little rain, crops were poor and little money.

But somehow my mother managed to spend sixpence on a Ticket in the Sweep on a horse race - we think it was the Melbourne Cup. My mother, who was not a confident rider and frightened of horses, knew nothing about horse racing and even less about Sweeps and betting. But she had a ticket in the Sweep. She had drawn a horse and it was the favourite! She had drawn Peter Pan. He won!!

And my mother won the incredible sum of 14 shillings. A fortune at the time! A sum to be savoured. How to spend it? Food? Pay some bills? Possibly.

The next time my mother was in town she had the money in hand. What to spend it on? She stood in front of the Kodak Camera shop and gazed at the Box Brownie Camera 14/-. Her heart leapt. She had used a camera in Melbourne, loved using it, and seemed to have a talent in its use. She pondered. Then something in her Irish genes said, "Yes! Buy it!!" So she did - and so began her pictorial record of all the important milestones in our lives.

My mother proved to have quite a talent with the camera, and that can be judged by the quality of photos shown here.

And her photo of her four children on Queenie the Elephant at the Melbourne Zoo in 1940 has been claimed for the Zoo Archives.