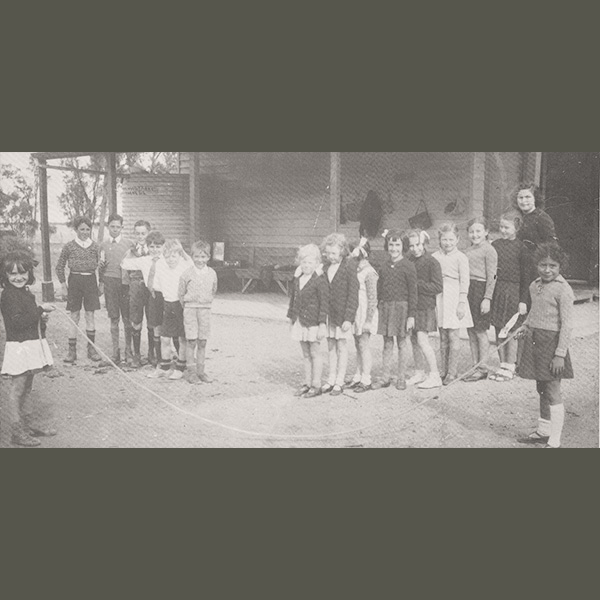 We have seen the passing of the little One-Teacher Rural Schools, with sadness and nostalgia; and we can be sure that we will not see them again; so we salute them for their wonderful contribution to the Education of our children.

The dedicated hard-working teachers in these little schools, provided top-class education under great difficulties, with remoteness being a major problem and transport and accommodation being also of concern.

One problem they didn't have was with the children - there was little truancy, few social problems, no psychological difficulties and very few learning or behavioural problems among the students. The children were eager to get to school, were well behaved, worked hard and concentrated on the job.

A city teacher, who came to a little country school, made the comment when she returned to Fitzroy School three years later:-

This was the assessment of Miss Mary Rooney, a very experienced and talented teacher.

Life was difficult enough for the children, having to work hard on the farms milking cows, collecting kindling, gathering eggs, feeding calves, lambs or pigs, etc. - all this before riding or walking to school!

Students commenced school aged six years in Grade one and used slates and slate pencils for writing, and/or recorded work.

Grade two pupils continued with slates and slate pencils only on larger slates.

Grade three changed to pencil and exercise books and in Grade four, the children began using dipping pen and ink. The ink was made from the powder supplied and the ink wells were filled by a monitor on Monday morning, after the ink powder had been mixed with water.

The same monitor would collect the ink wells on Friday and wash out the debris of dead flies and small pieces of paper which had accumulated.

The student went on through the grades until sitting for the Qualifying Certificate (up to 1912) in Grade six for entrance to High School, or sat for the Merit Certificate in Grade eight, up until 1947; and standards were high.

The school building was usually of wooden construction, about 25' x 23' with a tin chimney in the centre of the west wall and a blackboard on either side. Furniture was fairly basic, long form style desks before the dual desk arrived, the teacher's high desk and stool and two cupboards; one for school requisites and one for library books.

The schools were placed about six miles apart because that was the maximum distance it was felt a child could walk to school.

Education was compulsory, free and secular and it was felt that all children should be proficient in Reading, Writing and Arithmetic.

The children carried their lunches, wrapped in grease proof paper and brown paper or newspaper (no plastic) to school- egg sandwiches or tomato sandwiches didn't last too well on horseback, so on most occasions "jam" was the go - tasty, filling and stayed in the one piece!!

The little bush school relied on the School Committee a good deal and the education of our children over the years would not have been so successful without the hard-working fundraising brigade of parents. We salute them!!

The rural one-teacher school was successful because of the dedication of the teacher, the wonderful support of the parents and the great students who were so self-desciplined, self-motivated, conscientious and dependable and all these parts produced a great "whole" with the overall feeling of warmth and family pervading all. Students of a little Rural School were a close knit bunch and they have generally stayed in contact with each other over the years.

And so, to the Parents, Students and Teachers we salute you and thank you for a job well done!

Your contribution to the development of our country and our young citizens has been magnificent.