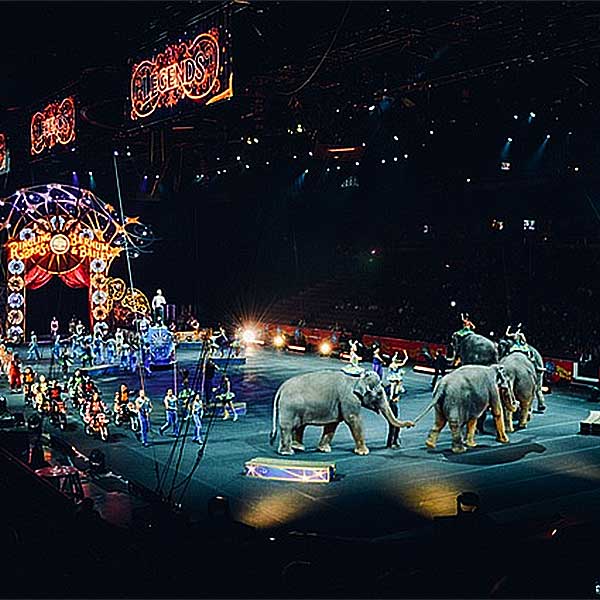 I always wanted to join a circus, and the opportunity came when in my 20s while backpacking across America. I had seen a Ringling Brothers Barnum and Bailey 'The Greatest Show on Earth' poster at a Pittsbugh railway station calling for casual labourers to work with circus animals. And I found the circus that afternoon.

Talk about big! I knew the Yanks went in for Big, and they weren't kidding with this show, I was amazed at the size of the train the circus travelled on - a huge silver engine followed by dozens of carriages for the performers and crew. Behind them a string of flat-tops carrying a variety of animals.

I fronted up at a huge tent, thinking it would have the circus ring in it, but no, it was full of long tables and bench seats. The massive thing was just the dining tent. The big top wasn't even off the train yet! I found out later that they feed hundreds of people. I'm not talking feeding customers, they fed hundreds of staff!

There was a bloke nearby setting up a ticket box, and he told me to go over to the hiring trailer. A good-looking office girl ran it. I put on my best Yank accent and asked for a job. She looked up from her paperwork for a moment and said, "You're Australian, are you Honey?" Well, I'll be blowed! I thought my passport must have been sticking out of my pocket or something! So I go all sheepish and try to blush, but it's wasted on this dame. She just scribbled on a slip of paper and tells me to take it over to the animal trainer.

The manager in the animal enclosure was interested in I knew about animals. As I had spent time on the family farm, I knew how to feed chooks and collect eggs. I also knew the Yanks, in their ignorance, called chooks chickens, so I was careful to keep up my American voice.

"Got any chickens need looking after?"

"Goddamn it son, what I've got here is a bunch of Alifants, and I'm running out of sons-of-bitches to take care of 'em."

"Not a problem mate, I'm just your man."

And I got the job.

Well, they say experience is the best teacher. These things turned out to be quite a bit different than chooks. Sure, they didn't lay eggs, but they crapped all day, and I was to be the number one shit-shifter. No sooner did they drop a load and I was expected to shovel it into a barrow and wheel it to a trash pile. But I was pretty much alone once the boss saw I was a nifty shit-shifter.

After a while I got to thinking how to collect the stuff at the source rather than wait until it was splashed all over the place, often on my boots. I pulled some twine off the hay bales, stood on a box and tied a bag up under one of the big blighter's tail. I got the twine around the tail and knotted it onto the bag, but some improvement was needed as the bag just hung shut. I wanted to run extra lines around the legs or up to the front somewhere. I was giving the tail a little tweak when the bit critter swung his head round and gave me a belt with his trunk. I must have sailed about five metres before I landed right where his mate had just dropped a load.

The job did have its good points, however. During the day locals wandered past showing their kids the animals - the elephants being the most popular. One guy asked me if the droppings would be any good on the garden.

"Struth, mate, good on the garden! Back home in Aussie gardeners pay about ten bucks for a bag of this stuff. Got more essential elements than the best fertiliser you can buy. Tell you what, I could let you have a large bag for just five bucks, but only if you promise not to tell anybody where you got it."

Of course he told everyone and I did some good business.

At 5.30 I was over to the dining tent for a feed and then it was time to retrieve the backpack from the looker in the Hiring Trailer and head for accommodation on the train.

We had a seven-day stop in Detroit so I had a chance to settle into a routine with the super-shitters. I guess the job was OK except there was another side to it that the boss had neglected to tell me about. Feeding, washing down and shovelling dung were bearable. At least it was outdoors, and quite a few sheilas wanted to make my acquaintance once I explained how I had personally hunted down and captured these great beasts in Africa. I thought I had one girl convinced as I described a particularly dangerous hunt I was on in Kenya, but that budding romance came to an abrupt halt when she remarked, "You're full of Bull, buddy. These pachyderms are from India."

When the boss came around on the second night I found out that the shortage of elephant handlers had to do with a big parade. He explained that looking after the big creatures was only half the job. The other part was to lead one of them in and out of the ring during the show. I was to hang onto the end of a short rope that led to a fitting in the animal's mouth. About 20 elephants would be assembled outside the tent, ready for the Grand Parade. Each animal was trained to hold the tail of the one in front with its trunk.

A handler walked beside every second animal, building it with the rope. There was an Indian Mahout riding on top of the lead animal, one about in the middle of the chain, and one at the end. That night the wardrobe mob fitted me and 10 other guys warned me to watch my step with these Goddamed Alifants.

What an act! I thought we would wander in, take a bow or two, throw the crowd some kisses and pat our beloved pets while the cameras clicked away. No way. The whole effort to parade all the circus performers and the animals required split-second timing and high-speed manoeuvring. When the whistle blew, the line of linked elephants surged forward and entered the tent at a run. Everything would be quiet as they thundered in. Clouds of dust, handlers dragged along clinging to their ropes and the thump of massive feet.

When I was warned to 'watch my feet', they meant it literally. The elephants were too well trained to break free, but amused themselves by stepping on feet. They would toss and pull a bit so you lost your position up near their head. The moment your feet were in the wrong spot they trod on them. And by the time we made it out of the ring I had several bruised toes on one foot. And the boss was a bit concerned as a number of us were limping badly.

The next night Wardrobe issued us with steel-capped boots. It didn't help much as these big buggers weren't fussy about small stuff like toes. They'd clobber you right across your foot and up your ankle as well. The boss reckoned I was the only handler he'd seen who had managed to get both feet injured on the one night.

I had to give the job away when I ran out of working feet. Before I left I wandered to have a look at the showmen in a series of small tents lined up on the Avenue leading to the Big Top entrance. They were known as The Freaks, which was sort of a put down, but they were a happy bunch and wore the label as a badge of honour.

There was The Bearded Lady, The Tattooed Man, a guy with hundreds of needles and pins through his skin, a sword swallower, two midgets, The Tallest Man in the World - and the Rat Man.

The Rat Man's act was pretty disgusting stuff; I think there will always be paying customers who hope to see a trapese artist fall, or a lion attack the Keeper, but they flocked to see The Rat Man. He kept a large rat in a cage, as well as several mice. First he would swallow a box of matches and then vomit up the matches separately, followed by the box - in two parts. Then his Assistant would place a bucket of water at his feet and after a long drink of water he would extract a wriggling mouse from the cage, hold it by the tail while smoking, then swallow it, gulp by gulp, do the same to two others. And then vomit a stream of live mice into the bucket.

The Assistant would return them to the cage while he extracted the caged rat. Held up by the tail, he would blow smoke rings at it. This was no baby rat, I'm talking about the big kind of scratching, biting rodent. In it went head first, and then down in a series of gulps. When he vomited it back up it didn't emerge cleanly by reappeared in a series of spurts as he grunted and his stomach heaved. Who said we humans aren't a sick lot!

Oh well, time to move on - home was calling. And I needed to hitch over to the Coast.