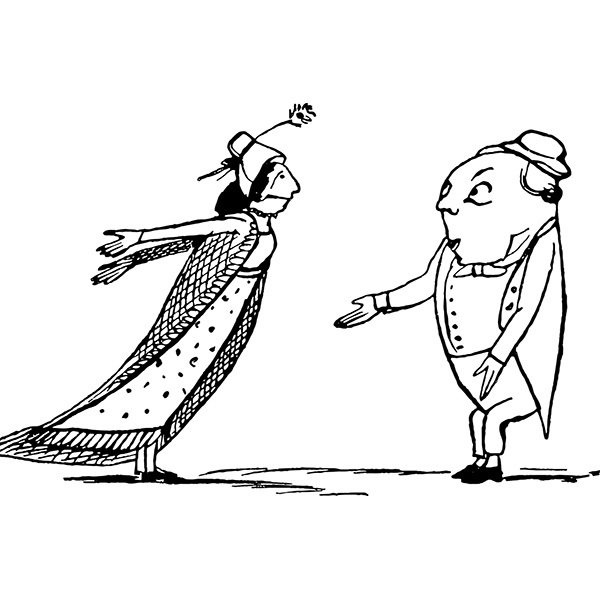 (This story was given to me by my wife who had worked in the hearing aid service where she witnessed this occurrence.)

Albert Westfield sat upright on a waiting room chair. His polished shoes together and pointing straight ahead, hands folded neatly in his lap.

Albert is a pudgy round man, soft and pink, with wisps of downy grey hair carefully plastered across a domed forehead. He has a slightly bewildered appearance. The sort of look that creeps onto the faces of the elderly when they stop bothering to keep up with the world that is changing rapidly about them.

Albert is at the Hearing Services Centre to have his hearing aid tested. Mrs Westfield, his buxom wife, towed him in there, almost an hour before the appointment with an audiologist. As she entered, Mrs Westfield’s booming voice gave the receptionist a little shudder of dislike.

‘Ullo luv,’ she bellowed from the doorway as she ushered Albert in. ‘ I’ve bought ‘im in nice an ’early. I’ll ‘ave to leave ‘im here for an hour or so while I nip around to see me sister Mavis. He’ll be orlright, won't ya, Albert?’ She patted his head while he gave the receptionist a vacant smile. Albert, launched in the right direction by his wife’s firm hand in the middle of his back, moved towards a row of chairs. Still in the doorway, his wife continued to address the receptionist.

‘Now we don’t want no trouble this time, luv. You see ‘e gets ‘is hearing aid fixed up proper and give ‘im plenty of nice fresh batteries.’

Having delivered this broadside, the awesome lady lumbered across the room and deposited her ample bosom on the reception counter. With one beefy hand angled across her mouth, she adopted a stage whisper only slightly below the volume of her usual megaphone voice.

‘Deterioratin’ fast ‘e is. I ‘ave to do everyfing for ‘im meself. Almost stone deaf now, can’t ‘ardly ‘ear a word I say.’

The receptionist did her best to smile while she gave an understanding nod. The smile only managed to curl up one side of her mouth as it battled against a sneer. Why can’t I ever get used to that woman? she wondered, I’d rather deal with her sad little husband any day. He may be away with the fairies, but at least he is quiet about it.

Mrs Westfield sailing out on her way to visit Mavis almost collided with a tiny woman in an overlong brown overcoat.

‘Watch where yer going luv.’ Said Mrs Westfield glaring down on the little figure that was moving out of the way as quickly as it could. The battleship that was Mrs Westfield gathered momentum and forged ahead, rocking the frail craft that was Gertrude Parsons on her way in for a hearing-aid replacement.

‘Oh no,’ muttered the receptionist. ‘Two of them, both too early for their appointments. What is this place , a playschool for the elderly?’

Gertrude was a regular. Always in the same cast-off coat, the faded colour contrasting with the bright white shopping bags clutched in her scrawny hands.

‘Afternoon Mrs Parsons.’ This time the girl behind the counter managed a full-mouth smile. “Early today?’

Gertrude, who had lived alone for many years, talked to herself quietly and non-stop. This habit didn’t prevent her from dealing with the people that drifted into her world.

She was adept at communicating with actions that took place unrelated to what her mouth was saying, as she carried on meaningful conversations with unseen people in front of her. With years of practise she had perfected a style that caused the least problems. People became accustomed to having money for payments, appointment cards and various notes thrust at them by a mottled hand protruding from a moulding overcoat, topped by a thin grey face. She wouldn’t look at people directly, but turning her face to one side she would gabble on contentedly in a conversational undertone.

Appointment card surrendered, Gertrude shuffled over to a chair four away from Albert. Clustering her shopping bags at her feet, she hunched forward and engaged in a quiet chat with an unseen listener.

And so the two old people sat for at least ten minutes, with Gertrude’s monologue flowing uninterrupted and Albert looking straight ahead. Then, as though moved by some unknown force, each moved their head, so that they were facing each other. At first Gertrude’s quiet chatter continued and Albert’s hands and feet remained neatly in position. They seemed to struggle to break free from their long engrained personae. Slowly the tiny lady’s voice became softer and slower. Albert’s unclasped his hands and nervously rubbed them along his thighs. Then, so loudly that it startled the receptionist, Gertrude said . ‘Hullo’, right at Albert. Reading her lips, Albert said ‘Hullo,’ back. It came out as a squeaky ‘Lo’. He wet his lips, hurrumped twice and tried again. This time hello came out in a deep unwavering voice. At the same time he raised a hand casually to the back of one ear and turned on his hearing aid.

Within a few minutes, a relaxed Albert, legs crossed and cardigan unbuttoned, was having an animated conversation with a lady who had shed her overcoat and booted her shopping bags under the seat.

The receptionist was amazed. She couldn’t believe her eyes when the two elderly people both rose and sat down again in seats next to each other. Laughter, smiles and playful body language brightened the austere room. Soon they were touching a hand or arm to emphasise a point and leaning in to whisper some confidence not meant for other ears.

The receptionist slipped from behind her counter and disappeared into a back room Here she found the two audiologists filling in time between appointments.

‘Excuse me Mary, Joan. I wonder if you would mind seeing your next ones a little early? Mrs Parsons and Mr Westfield are both here. They’re acting a bit out of character and it’s beginning to worry me.’

‘It’s weird. Usually he’s off with the fairies and she just sits there and gabbles. Out of the blue they are becoming very friendly. I’m worried they might try to elope or something if I don’t get them apart.”

‘You’re joking!’ Mary laughed. ‘Don’t be such a spoiled sport, let the poor old things have a little fun.’

At the receptionist’s urging they tiptoed to the waiting room and peeked through the partly opened door. Albert and Gertrude were both busy scribbling on pieces of paper that looked suspiciously like pages torn from the waiting room magazine. They heard Gertrude say, ‘If you ring me at night, don’t hang up too soon ‘cause I might be in the bath.’

They both giggled, exchanged notes and relaxed back into their seats. Albert’s hand resting on Gertrude’s arm, which lay along his out-stretched leg. The receptionist entered, coughing loudly and announced that the audiologists would see them now. The couple acting like long-time lovers, strolled out of the room hand in hand, parting reluctantly at the separate interview rooms.

Albert finished first and was sucking a peppermint back in the waiting room when Gertrude appeared. taking another lolly from his pocket he popped it into the lady’s waiting mouth. They sat close, silently gazing into each other's eyes as they sucked contentedly on their sweets.

The moment was broken when the door crashed open and a familiar voice filled the room.

‘Back again luv, that silly sister of mine wasn’t even ‘ome.’

Without even a glance towards the couple across the room, Mrs Westfield marched over to the counter and gave the receptionist a detailed account of her wasted trip to Mavis’s. After several minutes of monologue she recalled why she was there and shifted her bulk around to check if Albert was where he should be.

Albert Westfield sat upright on the waiting-room chair. His hands were neatly folded in his lap, his feet together and drawn up tightly against the chair legs. His soft pink face wore an expression of quiet bewilderment which was tinged with a little knowing smile.

Four seats away, complete with overcoat, Gertrude Parsons arranged a cluster of shopping bags at her feet as she hunched forward in earnest conversation with an invisible listener.