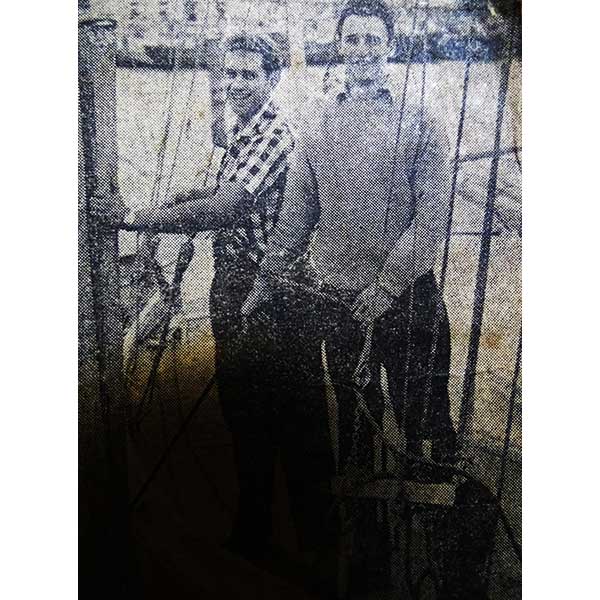 It’s 1968 and I’m 25, footloose and looking for adventure. I fancied going to sea in a small yacht and travelled to New Zealand where I had been told yachts were cheaper than in Aussie. They were, so I bought an old 30 ft. wooden Yawl (two masts with the back one further aft than the steering position). Graeme, a mate from Melbourne, joined me and we sailed to Fiji without any major problems.

After working for three months on the Nadi Airport upgrade, we took off for Tonga. West of the main Fiji islands there is a group of low lying coral islands known as the Lau group. Arriving at the first one we came to, we drifted outside the reef that surrounded a big lagoon. The trick was to find one of the narrow and shallow entrances that are common to the group. Entrances that is too small for any decent-sized trading ships to enter. This meant the group was relatively isolated and interesting as it is unspoiled by the tourist trade. We could see lots of coconut tree and the huts of a fair-sized village. It seemed likely that the place would also have some friendly local girls!

Cruising back and forth, we were about to give up on finding a channel when a canoe with 2 natives on board came out via a narrow opening we had missed. They came alongside and offered to guide us in. With Graeme up the mast on lookout for isolated coral heads we slowly followed the canoe and anchored opposite the village. A crowd was waiting to see these strange white men from across the sea.

We had been told of the right moves for visitors to make in the islands and so asked to see the Chief. At his hut we shook hands with everyone in sight and presented him with sticks of foul Fijian tobacco and some tins of the much-loved NZ bully beef.

We had a great two days ahead of us. On the beach everyone wanted the chance to actually touch the white ‘semi-gods’, with mothers holding up their babies for us to pat as it was believed to bring good luck.

Getting close and friendly with the girls, however, was a different story. My advice to any young blokes intending to visit this area would be to try your luck in the big centres such as Suva or Nuku’alofa. Girls in the more remote places have to continue in their village life after you have gone, and they tend to be guarded by relatives and of course the local men.

The grand old Chief was aware of the situation and thought of a way so that the local girls could get close to us in an acceptable manner. He organised a dance in a large hut that I guess was the village hall. A number females of all ages lined up across one end of the hall with their arms around the person on either side. I was directed to on one end on the line and Graeme was shuffled into the middle. They had a sort of a band comprising of three drummers, a guitar player and a bloke who sort of sang and warbled.

When the band started up the Chief gave a signal and the whole line marched up the hall, stopped at the end and turned around. Everyone then moved one place to the left, with the last one on the line running around to join the other end, march back to the starting place, change, and march up again until every woman had experienced both the white man’s arms around her waist.

Exploring the island the next morning, I was intrigued with their toilet arrangements. At the beach there was a long, rickety jetty that led to a couple of toilet shelters. The toilets themselves were seats nailed to two cross beams with a straight drop to the water below. The jetty was long enough for the toilets to be beyond the tide’s low water mark, and couples would stroll out there hand in hand, separating at the two cubicles and later strolling back like they had been on a walk to the park.

For us this little slice of paradise had one significant drawback. Mosquitoes! Clouds of them. With no mozzie nets on board, sleep was hard to come by and this led us to make a silly mistake. Unwilling to suffer another night of buzzing and bites, we decided to up anchor, leave in the late afternoon and find our own way over to the channel.

Coral reefs unfortunately don’t just fringe the lagoons - there are often isolated coral heads on long ‘stalks’ lying just below the surface. In order to miss these, yachties take two precautions. Firstly they traverse lagoons with the sun behind the yacht so they are not blinded with the sun’s reflection on the water ahead of them. Secondly, they wear Polaroid sunglasses as they show up the colour changes in shallowing water. Locals had been swarming all over the yacht during our stay, and I guess the temptation was too great not to take a memento of the visit from these strange white men from across the sea. Yep! They pinched both pairs of sunglasses.

Crossing the lagoon, Graeme, up the mast again kept yelling down that he couldn’t, "See a bloody thing!" Even before we could find the channel the yacht went thump, crunch, into a coral head. The bow jammed well and truly into the soft coral! HELP! We put the motor flat out in reverse and when that didn’t work, Graeme rowed an anchor out from the stern with along rope attached that he led to a deck winch. I slipped over the bow and up to my knees in coral heaved at the bow while he cranked the winch. Still no go!

It looked like we were in proper strife, when around a corner in the lagoon came a large canoe loaded not only with a family but, two trussed pigs, bags of coconuts and lots of other possessions. We waved; they came over and surveyed the situation.

It was soon agreed that the solution was to load the stern deck with all the weight we could and have as many pairs of hands heaving on the rear anchor rope, the motor reversing, and me still shouldering the bow. Three large women, two men, two trussed pigs and several bags of coconuts all crowded on the stern. To cries of ‘One, two, three, HEAVE!’ the bow lifted and we were free. Laughter all round. Tins of bully beef changed hands, the canoe was reloaded and they kindly lead us out of the channel.

Goodbye Lau. Happy memories of you exist to this day!