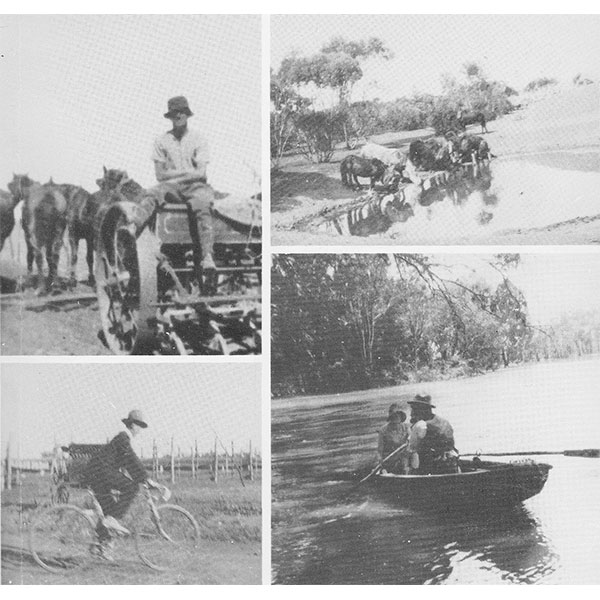 Part 2 - Teaching in a One Room School

The plan of that school was repeated right throughout the Mallee. Plenty of big windows on one side, and a fairly large window on the other. There was also a little room to keep your papers and books in. There was a large open fireplace on the west side, with new blackboards on either side. But it didn't take long for the blackboards to start to buckle, with the terrific heat we had.

There was one rainwater tank and a filter to filter the water for the children to drink.

The bush shed that the school was in, prior to the erection of the new building, was used by the children to put their horses in during the day. The parents had put a yard around it, and the horses were put there for shade. Many of the pupils rode horses or drove a buggy or a gig to school. Some children walked three to four miles, and they would land in at any time during the morning because they had no idea what the time was - they didn't have a clock they said! So I had to be prepared for them walking in any time from 10 o'clock to 11 o'clock.

Another family walked seven miles thinking that they would get a lift, and sometimes they did.

Another family came in a gig, and several children rode on horse-back.

One little girl, a Swedish girl, rode a horse on a bag (no saddle) five miles to school, and when she arrived her legs were all red and sore, so I have to render first aid for her - her legs were in a shocking state. It was very difficult for her to get to school.

Another little boy used to come to school, but not very often, because he said he had to do the ploughing. And I said, "But you're too small to sit on the plough." And he replied, "They tie me on so I won't fall off."

They were very good children - now I look back on them - there are very few of those children who didn't do well in life. They must have had the will to get on. Quite a lot of them got very good positions. They loved school, and were very keen to come to school. They really loved school and they loved to work - what we call work at school. You had to keep giving them more work in country schools - they wanted to do it. They were so different from the children in the city. There was an eagerness for learning in the country children. In the country you had to keep the work up to the children, while in the city you had to keep the children up to the work. Those little children would finish their work and they wanted some more. I never found that in city schools - where they'd finish their work and then it was time for a little play, or something.

When you are running a rural school you have to plan ahead - you are teaching some, and you have to make sure that the others have plenty to do. I found that the country children were interested in everything that went on, and as a matter of fact, I learnt a lot from those children. They could tell me a lot about the bush that I didn't know - so it was a two-way learning process.

I found that the little school was quite modern for those days, the little dual desks were new; and the teacher's desk was quite adequate - it was placed on a raised platform, so I could keep a good eye on the children.

I had them in groups - in rural schools Grades 7 & 8 worked together; 5 & 6; 3 & 4, and 1 & 2. The teacher teaches for 15 minutes (you divide your lessons into 15 minute segments) and while you are teaching, the other grades work from the blackboard lessons or from text books. You spent a lot of time after school preparing your blackboard and organising your lessons.

I didn't like the pictures on the walls - I thought they lacked a bit of imagination. There was the picture of the King, of course, and one, which was very good, was of Sturt on the Murray River (the Murray was quite near us) but some of the other pictures were of Kitchener and the British Empire. We could have done with a few good pictures. The one I liked very much hung over the blackboard, because that was the one that I could look up and see the reflection of the children in the classes, while I was writing on the board. I can't remember what was in the picture. Nor did we have much in the way of books - we didn't have a library where children could take books home to study, we had very few books for reading - we depended on the School Papers and the Readers, which were very, very good.

I had to make nearly all my own aids for teaching grade 1 & 2. All the charts had to be made too. I got all my requisites - chalk, cardboard, ink etc from Everys in Bendigo, and they would come up by rail. We had an allowance to run the school on, and thus covered the cleaning of the school, basic requisites, as well as paying the boys to empty the toilets every Friday afternoon. There was a tin can in each of the two outdoor toilets, and each Friday two boys would dig a hole and empty the can into this, and this unpleasant job they would be paid about 6d. I was supposed to clean the windows but as I told the Inspector, "I don't think I can get a long enough ladder, let alone climb up, to clean those high windows. I don't think I could do that. Are they expecting me to do that?" And he said, "No, I don't think they'd ask you to do that." I used to clean the windows the best I could, using a mop. I don't think that the chimney was ever cleaned, in my day.

We had white ant trouble - the white ants always seemed to like to eat the floor boards near the blackboards and I very often put my heel through that. So I had to write to the Department and complain about that damage, because it could have been dangerous.