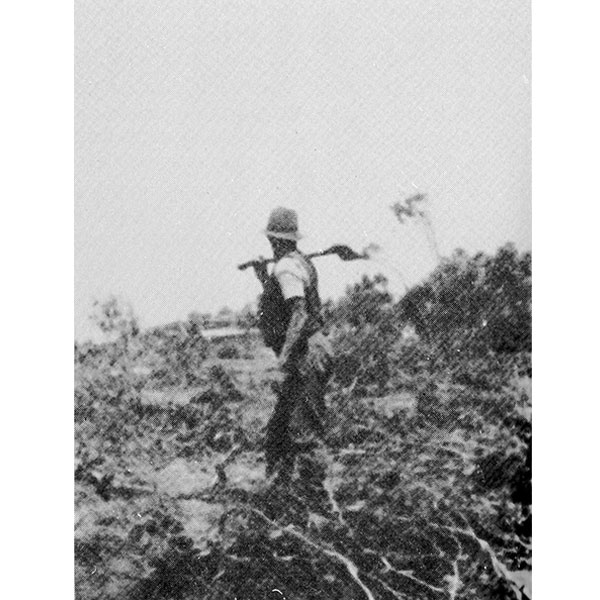 They had arrived on foot. Indian workers walked everywhere with a bundle of all they possessed, very few had any possessions. I don't think we had ever realised the poverty that would drive people to that extent, it must be an horrific poverty. And they worked for very little. They must have had some help to come out to Australia from the Commonwealth as India was part of the Commonwealth then.

They wore western dress except for the turban. And these workers talked about their families. They said they were from the plains country in the Punjab. They were tiny men - I dare say they were just about 5', if that, and very delicately made. One was Bharg Singh and the other was Bhaj Singh, as far as I could make out, and we called them Jackie and Johnny.

I think one them was well over 60 and the other over 70, his legs used to give out and he'd sit down a lot on the paddock. Every now and again my husband would see the younger one taking a stick and making him get up to work, telling him to get on and to get working. He was getting too old to work, his eyes were going too.

They had families - they left their wives to come out to get some money. And they were determined to go back to their family; good family men, I think. One man's wife must have got word out to him that they lost their only son. I think it must have come through word of mouth through other Indians, perhaps in the bigger cities, because I don't think there was any communication in the written word. He had a photograph of his wife, he showed me a photograph of her, but I don't think there was any writing. He learnt that his son had died and it was a great tragedy because the boy was very important. He got word to his wife that she should marry his brother, who was much older than he, and perhaps have another son. I thought that was very broad-minded of him.

Their patience was something wonderful to watch, they seemed very satisfied with what they got for their work, and have a tolerance and a patience which I haven't seen anything like before. Their acceptance, I think, of life. I don't know if it's some of the Indians or not, but they just accept the way things are and they don't kick against it. Where an Australian boy if he was in such dire poverty, would fight and say, 'To hell with all this! I can't put up with this, I'm not going to work for peanuts like this and I won't put up with it!' And they would struggle against it, wouldn't they? And they'd try to make things better. But there's an acceptance with these Indians that I don't understand. When his son died, well, you just go and marry my brother and maybe you'll get another son. This acceptance of things, I don't understand it.

They kept their job of picking up Mallee roots and making a little bit of money so that when they went back to India they could have so much that they could live, well, not exactly in poverty but they wouldn't want - they wouldn't be in riches but they wouldn't really be in want. We didn't pay them much, goodness knows we didn't have a lot, but I think what they had they saved, they didn't spend it on anything.

We'd hear them chattering and reciting prayers at night. They led a very, we would say a most uninteresting, dull life, there was no pleasure at all in it, just work till you drop nearly and go home and have something to eat and fall asleep. There seemed to be nothing in it, but I expect they did it so they could go home with a little bit of money to live in their luxury - they call it luxury, I suppose.

They made their own damper at night, their own bread, and lived very economically. They chopped off the tops of the wild turnip and they chewed them or they stewed them up, they lived off the land, if they could. They would eat mutton but wouldn't touch cow at all, that was a sacred animal. I don't know if they ate chicken or rabbit, I didn't intrude into any of their lives, I just left them alone. But I dare say chicken would be one if they wanted it. Anything they'd want from the store we got for them.

They used to come up with a bowl for buttermilk and I thought that they were drinking it until I found out that the buttermilk was being used to wash their hair. They were very clean people, it was quite a day to see them wash their turban, quite a long piece of cloth. And they were very particular about their beards and about their hair too, it had to be kept very clean. They kept their teeth very clean with soft twigs from the Mallee trees, they fluffed them up at the end and bound them tight, and that was used as a toothbrush.

Jacky and Johnnie went home by ship just before the war in '39 and The Sun News Pictorial - I think a few Indians were going home at that time, it was just before the war - The Sun was there and took a photo because I think the ship was full of Indians. The Indians in those days always catered for their own food, their own food on board the boat - they looked after themselves, I think.

My thoughts of the Indians are very kind thoughts, I am full of respect for them. And I think that's pretty general, they were liked.