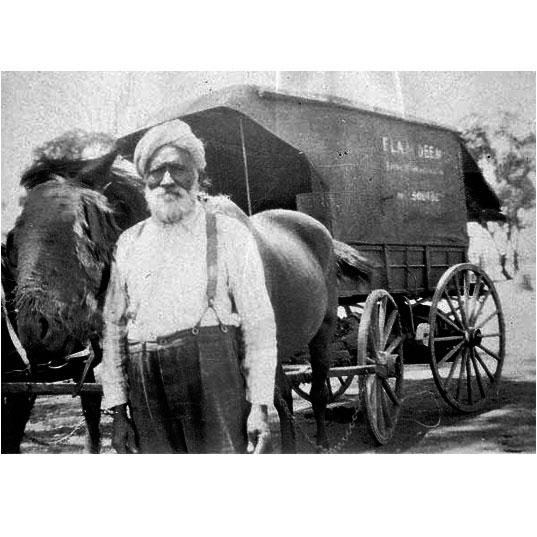 Around about the 30's, I think, quite often you'd see an Indian hawker come around the farms. In those days very few automobiles of any sort and we farmer's wives were dependent on the horse and gig to go the several miles into shops - which wasn't very often - for our supplies. And we were very pleased to see these hawkers, they carried such a variety of tiny things that the housewife really depended on, tiny things that were so unimportant for other people, like needles and cotton and darning wool and little bits of material to make children's clothes, soaps, toilet soap. Some of us made our own soap but you couldn't wash your face with that, but they he had beautiful soaps. And sometimes he carried cough medicines, and then of course he had curtaining and lengths for making dresses. And he was very welcome indeed.

The van was just an ordinary covered wagon with the sides, I think they were mostly canvas with perhaps outside wood, and he'd let them down just to show us his wares that were inside, all nicely packed, and it was all very comfortable. It was pulled by one horse and there was no sleeping accommodation, I think he pitched his tent somewhere at night.

I think he probably pulled into a sale somewhere, or the markets, or somewhere near Bendigo and loaded up and then went through the country towns, and went right out to the farms and went back to replenish his store again.

Of course, everybody was clamoring around, the children were excited to see what was there - it was quite a red-letter day when the hawker arrived. And strangely enough these men were well-liked with the farmers, they got on well together. And children liked them too. Well, we'd get a few things that we needed, and sometimes they would always get some chaff from the farmer to feed the horse at night. Their upkeep, their overhead was nil just about, and I expect they made a good living out of it, and they camped the night there. And this Mohamed that called at our place was a good draughts player and would always come up with his draughts board underneath his arm to have a game with my husband. And my husband said he was a very good player. I expect he went through several of the farms in one day, two before lunch and two after lunch, but as a rule he called to us just before tea time, and after we bought what we wanted he would go away and have his own tea and then come down for his evening game of draughts.

I couldn't help but feel in his presence that he was a rather distinguished person. He was somebody you couldn't look down on in any shape or form, he had a dignity. I don't know what part of India he came from, you didn't discuss that sort of thing with him - vastly different to the two little Indians that we had working for us that were picking up the Mallee stumps, they would talk with us about the Punjab that they came from, and a little bit about their family, but this man you didn't take any liberties with him. He was a very fine gentleman.

I must tell you about laudanum. Our little store sold a lot of laudanum when I went up there in the early days and I was told that the hawkers used to buy it all. It was a great pain killer, of course, it was used in the early days too. But I think also they could use it to put them to sleep - give them a few nice dreams, perhaps, something like opium, I don't know. So I said to the girls, I said, And do they take it all? And they said, They take all the laudanum. But I suppose they lived very monotonous lives and perhaps they liked to go to sleep, I think that's what they used it for. Very interesting people.

I think everybody spoke highly of the hawkers that came our way. But the day of the hawker was just about over as soon as the motor car came and people bought their own cars and whizzed away to the shops - it was no distance with the motor car.

Then we had a different type of hawker came around in big flash cars, carrying carpets and expensive things, all ready to make some money out of the farmers who were getting on their feet. They weren't like the Indian hawkers though, not as genteel and they weren't as good company.

The Afghans with the camels have gone, all made Australia a very colourful place. Opened up the country, didn't it? But what us housewives would have done without the hawker I do not know. But they also did something more - they brightened our lives.