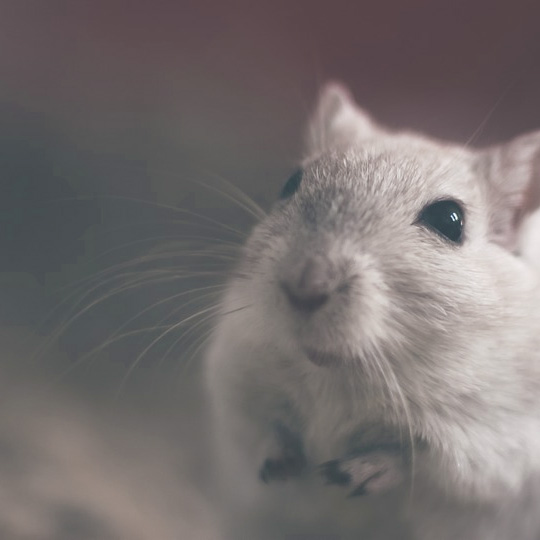 When I transferred from boarding at the store, I went to stay with the family who were in charge of the railway station. It was while I was there that I struck my first mouse plague. The house was a nice cement one, but the mice were getting in everywhere. Mr Rose set traps everywhere, and this night he said to me, "Do you mind I set some strychnine in some flour in your bedroom?", because they eating my clothing; they were getting into the drawers and eating everything.

I went to bed early and I had the lamp lit, and he had placed three or four little containers of flour and strychnine on the floor. I'd heard of this before, but I hadn't taken much notice of it. My bedroom door was closed, and I thought that it was very tightly closed, but I was watching and they were squeezing underneath the door and coming into my room. They made little squeaks as they went around the floor, in delight, you see, for here was something to eat. They looked at it and then they got up on their hind legs and they sort of touched each others little front paws and they danced around those tins, before they started to eat, like a little ceremony. I wasn't dreaming and I never drank alcohol or anything like that in those days, and I was quite sober, just lying in my bed watching them. They ate and then the screaming started, and they hit themselves against the side of the room before they succumbed to it. All pretty horrifying.

The mice were very bad at school too, where they ate the children's books, my books and papers, and we had to be very careful with our lunches. The children used to bring mice to school in match boxes, or little boxes, with a bit of string tied to their tales, and they'd have races with them when they were out in the yard.

During school everyone would be very well-behaved, not wanting to be kept in, because they'd all want to go down to the big wheat stack at the railway station. They would go and take their cudgels and help to kill the mice. The wheat buyers used to pay the children so much to kill the mice. But of course, the more they killed, the more they seemed to come - there seemed to be no end to them. What I didn't like was the smell - everywhere you went there was this terrible smell. I can still remember the smell, and I still can't stand it. But the children made light of it.

Some of the children came to school with rashes on their hands from mouse plague, and some had it in their hair. When these kinds of things happen, people just make the best of it. Everyone had difficulty with the mice - all the children had great tales to tell you about the mice. They turned the tragedy into fun.

It was a tremendous shock to me, being from the city and not experiencing anything like it before, but you adjust very quickly. You learn to adjust - there it is - what are you going to do about it? You watch other people and how they manage. You don't just scream and run away - you can't. They had such fun out of the wretched things - they made a great game of it.

The dust storms were frightening because the whole sky would go dark, but they weren't so bad in the 1920s - they were much worse in the 1940s, when it was impossible to walk along a road because you couldn't see - you could get lost very easily.

At the school each ear, we would have Arbor Day when we planted trees, which were sent up to us - mostly sugar gums and peppercorns. We planted little irises around the flag pole too. We planted trees, but they didn't survive because we didn't have the water. It was impossible to grow anything there, and being away at holiday time made it very difficult, because there was nobody there to look after them. We only had the rainwater tank and we had to save it for drinking.

I never took the children swimming - I didn't take that responsibility as there was only a dam in someone's property to swim in. There was a shire dam, but you weren't allowed to swim there.

We went for a nature walk each spring, but we often took a short walk in the bush, not that we'd go far, because some children had to walk to school, and home again. The children were able to tell me the names of the trees and the birds, "Now, that's a jay, Miss Rooney." Sometimes they brought eggs to school for us to study. We grew little plants in our school room for nature study too. We grew wheat and other seeds; and osmosis experiments going. On the blackboard I always had a calendar drawn for the children, and whatever was in blossom I'd draw on the calendar. We filled in every day, whether it was sunny or raining or cloudy, and the date.

Across the top of the board I'd have the alphabet printed for grade 1 & 2, a written capital letters for the other grades. The blackboard would be divided into areas for the different grades, but when it started to buckle in the heat, it wasn't too good.

We didn't have trouble with possums getting in our rain tank at school because it had a cover over it, but we did where I boarded. The pet possum disappeared and 12 months later it was found dead in the rain tank, and we'd been drinking the water!