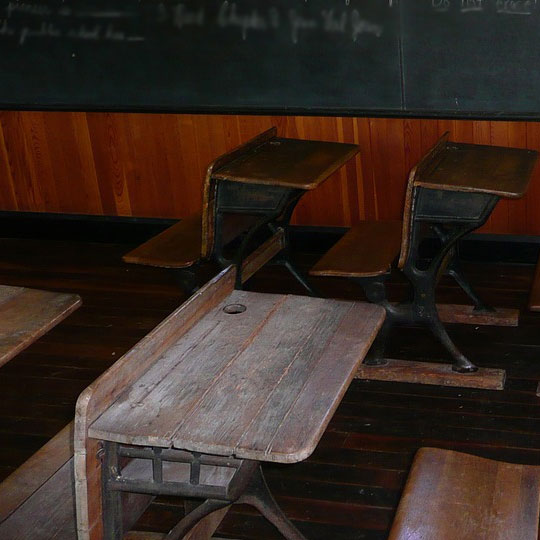 Our teaching in those days was very simple - we concentrated basically on reading, writing and arithmetic, with not as much emphasis on sport as they do today. I had no trouble teaching the children because they were intelligent and keen to learn. The children didn't seem to be too tired to do their work when they got to school, after travelling all those miles, but I know that in the dairying areas down south, some children would get up so early to help milk the cows that they would be very tired when they got to school. I was lucky because the children were on wheat farms and didn't have to get up early to help their parents. I never had children who fell asleep in school, as I know some teachers did.

The children always came to school, even on very hot days, and there was no such thing as "playing the wag" or truancy. I remember one very hot day when I was worried that the children were going to keel over in the terrible heat in the school room. I couldn't go near the blackboard because it was so hot, so I let them dampen their towels and sent them home early. The desks were even too hot to sit in, and I could see that those children would be a big responsibility for me if they collapsed. You had to use your own initiative very often - so I sent them off home, and told them to get home quickly.

The hot weather in those days used to last - there would be heat waves which would last for two or three weeks before a cool change.

At lunch time, in the middle of winter, we used to gather around the fire and the children would toast their sandwiches, and I would heat up water for them to have hot cocoa. And they used to love that lovely homely atmosphere. On cold mornings, I would let them stop work and run around outside the school, have exercise and deep breathing, to keep their blood circulating well, as we had some very severe frosts up there.

You use your common sense with children. Then I'd build the fire up; we had plenty of wood as the residents were very good in bringing us Mallee roots, so we had good, big fires.

I had a very good School Committee and would help in every way possible. We didn't have organised sport or inter-school sport, but we did play a match of cricket against Piangil School once. I was talking to a teacher from Piangil one day and he said, "How many children have you got out there?" I said, "About 28." So he asked, "Could you possibly get a cricket team?". And I replied, "I don't know, I'll try". So we got a team together (boys and girls) and the last little fellow in it was no bigger than the bat. So, to the great delight of the children, we went to Piangil to play the cricket match, making the 10 mile trip in buggies.

On a typical school day, when you came in, after morning talk (when the children would tell you what they'd seen and had had your little nature talk, or the children would tell of things that had happened), then you planned your work program to have the lighter subjects in the afternoon, so you'd begin with mental arithmetic (before the children got too tired) which would last about 10 minutes, then spelling, followed by arithmetic. We kept the subjects like reading, drawing, geography and history for the afternoon - when perhaps they just had to sit and listen.

We had copy books for writing, with the copperplate style of writing, with little axioms from the children to copy, for example, "All is not gold that glitters". The children had some problems with blots and smudges in the writing, but you expected that with ink pens. But I never blamed a child for that. I encouraged them to blot each word using blotting paper as they wrote, as I did, to obviate the problem.

I didn't have a fountain pen - I preferred the steel-nibbed pen. You marked your roll every morning and each afternoon, and you added up the attendance, every week, every month and every year.

We had mid-year and end-of-year examinations, and all those records were kept.

We didn't have to send home reports to parents in those days. The parents, who were interested, would ask you about their child's progress.

Usually the children played marbles or cricket in the summer time, and games like skipping in the winter.

I remember once that a circus came to Natya and they'd never seen a circus before up there, so, of course, everybody went to see the circus. I noticed that the children were all talk at school next day about what they'd seen...I dismissed the school that afternoon and I thought they'd all gone home, but about half past four I heard some laughing going on, away down behind the bush shed, and went down and they were trying to do what had been happening in the circus, by flank roping the horses to make them buck, to the great amusement of the ones who had stayed behind, and they were all having a great time, with much excitement.

The children played children's games in those days and, at Natya, because we didn't have much in the way of sports equipment, the games were simple. We had football, a cricket bat and ball, skipping ropes and tennis balls. The children brought their own marbles. Tennis was a very popular game among the adults then, but the children didn't play it.

Quite a lot of emphasis was placed on geography and history. In the 8th grade, we taught Latin and Greek derivations and civics. In drawing, there was free hand drawing and pastel drawing. And they were encouraged to illustrate poems with their own little ideas. We also had music, when we sang a lot - mainly songs on the back of the school paper, and I used a tuning fork and taught them the Sol-fah scale. The children loved to sing. At one stage we had a little old organ, but it fell to pieces. At different times of the day we stop to have a song, and they'd all join in. We also sang the songs that were popular at the time, like "Deep in the Heart of Texas" - they loved that - they used to clap their hands as they sang.

And they loved poetry and they memorised a lot of poems. They loved reading too. The school paper was eagerly looked forward to, and it only cost one penny.

Each child had to supply their own books for the year, and I can't remember whether they got them from the local store or whether I ordered them from Everys for them. The grades 1 and 2 children wrote on slates - the other grades used books, but they weren't very hard on books as every little bit of paper was well used. There was no such thing as tear a page out, or scribble on it.

They used steel-nibbed pens which were dipped in ink wells. The ink wells had to be washed out every Friday, and I used to mix up the black or red ink from powder and water.

The children in those days were in school more than they are now - they seem to have a lot of outdoor activities now. They are either going out on excursions or away on sports trips.

I would say that the average grade eight student when he left school in those days, was a well-education person. At the end of grade six, the child did a Qualifying Certificate, and a lot of children thought that that was the "Mecca" - if you go that, you could leave. But by going on to the Merit Certificate, at the end of grade eight - that was the highest in State school education. I had some children sitting for their Merit in my years at Natya, and I felt very confident that I was able to get them to the required standard, however, I was worried for them. I had done my job - now it was up to them. The ones I was sorry for were the ones who came to my school from down near the river, and there were a couple of questions on the maths paper, which they said they'd never been taught - compound ration, etc. I know that my name has gone on a lot of Merit Certificates over the years.

The child was promoted to the higher grade each year, according to his proficiency. Sometimes a child repeated a grade. And we didn't have what you have now - I'm surprised at this...I have sat around a table with a school's staff of teachers and someone has said, "No, you can't Johnny So & So down, because he's such an age. We know he's not fit to go up, but he's got to go up because of his age; we can't keep him down". In those days, we kept them down. In these days they won't keep children back, will they? It's a shame, I feel because that year back does help them as it consolidates what they've learned. You're giving them something to build on. If you take them from one grade and put them up into a higher grade before they've completed the grade that they're in, you've deprived them, haven't you, and they never catch up, never.

In teaching geography and history we didn't have access to any of the modern media, but we had good wall maps and excellent textbooks. The children did a lot of mapping - drawing maps of the different countries, this was before a lot of the countries of Europe were split up.

When I was at Natya, there was no radio, and newspapers were our only source of information. However, the telephone was connected to the post office.