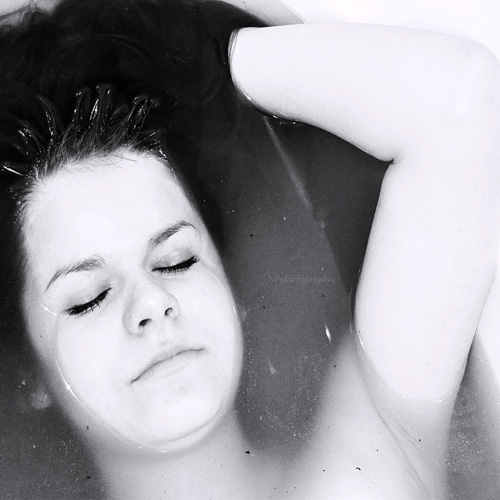 Light footsteps ran across the kitchen to take the wood to its intended destination. The contented mother loved the smell of freshly cut wood, and her face broke into her familiar smile as she selected the pieces to burn, as one would select produce or loaves of bread at a market. The door of the stove opened and the yellow flames leapt out to welcome the fresh intake of oxygen. Above on the large wood fired stove sat a huge black fountain, its contents gurgling and bubbling, emitting clouds of moist, white steam. It was almost time!

He was not a big man but his arms were lined with sinews that resembled twisted cables. These tired arms carried buckets of boiling water from the ominous “black monster” to the bathroom. He loved his children and even though he was unable to tell them, he cared for them in so many ways. His voice resonated as he cautioned them to stay clear of the boiling brew while he poured the water, gushing and slopping from the stainless steel milking buckets into the large white enamel bathtub. A brass chain tethered a black plug to the side of the bath. It resembled a dog on a leash. Above all the noise came the spitting sound of a single cold water tap bringing the boiling surge to the correct temperature.

Like a well-oiled troupe the children entered the bathroom, the eldest boy first. He washed quickly with a large cake of homemade yellow soap, scrubbing his body in circular motion. The mother breezed in and out of the room enjoying her task and the smells of her children’s cleaning processes. She reminded her favourite son to wash his greasy hair and scrub his neck, to which he complied. As she left the room she opened a small outward window to help demist the foggy mirror. She returned with a container of warm water to pour over his head. The soap residue along with one week’s grime slid down over his body and settled into the depths of the bath. He snatched a towel from the chrome rail and dried himself at great speed as his sisters were always trying to see him naked. They loved to jeer at him when he was vulnerable and he would cup his hands over his genitals, trying to hide the vestiges of young black, pubic hair and pleading for his mother to assist him. She would confidently call her offspring to order, displaying her favouritism and gentle nature.

As the eldest daughter entered the bathroom she was visibly angry that she was positioned second again to bathe and noted that the swirling water was turning a grey colour, the soap suds had dissolved somewhere in the swill and grit had settled in the area she was to sit. She inquired as to whether her brother had urinated in the bath and took his word that he had not. Her lips pursed as she retrieved her personal bottle of Egg Crème shampoo from a small pink metal cabinet and stepped graciously into the warm water, removing the towel when she was almost submerged. She uncapped the shampoo bottle, poured the creamy liquid into her hand and washed her short blonde hair. She lavished her body with the homemade soap, noting the large square block was starting to soften and turn slimy. She sniffed at the inconvenience. She did not stay long in this grey, uninviting water and huffed as she checked her hands for wrinkles, she sniffed again and quickly dried herself.

As the next daughter entered the bathroom she accepted that she would always be a second hand rose to her older sister and never a favourite. She too trusted that her siblings had not used the bath as a toilet, but was too reticent to ask. The mother once more had added two dippers full of hot water from the fountain, so the bath was nice and warm again. She did not notice the unpleasant smell of the water, the condensation streaking down the pink walls turning into little pools on the faded linoleum, or the large black ring of grease that was now circling the once clean bath. She felt the grit when she settled into the water, but did not fuss. She was kind and gentle like her mother. They both embraced the simplicity of farm life in the 1950’s. Her brown hair now washed and rinsed, she silently dried herself and left as inconspicuously as she had entered. She did not complain that she was not permitted to use her sister’s shampoo, but buried her resentment.

The mother was getting very busy now. She had three of her family washed, her husband was tired and hungry and she had an evening meal to finish preparing. She quickly added more hot water, looked at the condensation now spewing across the small room, picked up the wet towels and placed them on the floor to absorb the water, she shrugged her shoulders, sighed and went to the kitchen.

The youngest daughter had been waiting in anticipation in the hallway outside the bathroom. Everyone was gone and she could now bathe in peace. Her imagination kicked in as she sank into the warm filthy water. Being the rebel that she was she relieved herself with immense satisfaction, feeling the warm urine swirl around her buttocks. She commenced to swim like Ester Williams in the movies. She rolled around like the great whales she saw in pictures in her monthly School Paper magazine and she mimicked Catalina bombing, she had heard her uncle had executed in the Second World War. The water sloshed back and forth in waves concocting a wonderful sound, much of it ending up running over the side of the deep bath. No one disturbed her. The mother called from the kitchen occasionally to tell her to wash her hair, don’t make a mess and hurry along. She did not want to use the fatty soap on her hair and could not understand why the Egg Crème shampoo was not for her to use. She left the bath furtively and padded across the wet linoleum, reached up on her slippery tip toes to the little pink cabinet and snatched the yellow bottle. She heard her mother coming and jumped into the grotty water, once again slopping volumes over the sides and down onto the floor. She hid the bottle between her slim legs. Her mother, at seeing the state of the bathroom and her mousey brown hair still dry, was very cross and after a lecture she left in disgust. The naughty child knew she was in trouble again and quickly washed her tresses, spilling some of the precious shampoo into the cesspool around her. The mother did not return with the dippers of rinsing water, so feeling forgotten she shivered as she rinsed her own hair under the spring water tap. The bath turned cold and less inviting so she dried herself roughly and quickly put on her pyjamas, pulling them askew over her damp skin. Her father burst into the bathroom intending to give her a good talking to and perhaps a swift smack on her bottom, but retreated when he glimpsed his youngest child good and ready for the meal he was patiently waiting for. He ignored the wet floor that greeted him.

Wonderful smells assaulted the senses of the family seated around the large oak table in the dining room. The mother had constructed a huge bowl of salad with produce from her garden, she halved hard boiled eggs from the hens that were still young enough to lay and sliced juicy circles of oranges that came from from the orchard. Thin slices of Kraft Cheddar cheese were laid like little spokes around the edge of the dish. Left over cold, pale roast lamb from Sunday’s dinner was carved thinly and laid in little piles on each chipped dinner plate. Stale white bread and homemade butter were in copious amounts and condiments of rich homemade tomato sauce, green pickles and spicy tomato chutney festooned the centre of the table. The family passed each bowl and plate from right to left beginning with the father who sat at the head of the table. The youngest one always complained as she ended up with a plate of crisp lettuce and paltry salad scraps. The family ate greedily, a quick frown from the father soon curbed any joviality. The mother loved this meal. It was the best meal of the week. The children smelt fresh and their faces were shiny. Again more wonderful smells permeated the peaceful scene. A tall, glass jar of clingstone peaches cut into halves and preserved in sweet syrup, was slurped into a bowl and presented to the table with a jug of homemade thick custard and viscous cream from the single house cow. Bowls and spoons created a cacophony as they were passed around by the obedient children.

Tired but well sated, the father brushed his dentures and washed his face and hairy arms in the white hand basin. The children never witnessed him taking a bath but to them it did not matter, he smelled like oily citrus, greasy sheep and ripe wheat, all at various times. This familiar smell gave his brood a sense of belonging and security.

His day over he silently disappeared into his bedroom, his presence heralded by the glow of the kerosene lamp that peeped feebly into the passageway from under the brown wooden door. The little flame flickered and danced in the tall glass chimney. He reached for his horn rimmed glasses and reading material absorbing himself until the words blurred across the page. He turned down the lamp wick and sunk his aching body into the kapok mattress. He gathered the worn blankets to his slight body and was lulled to sleep by the nocturnal sounds of his beloved farm.