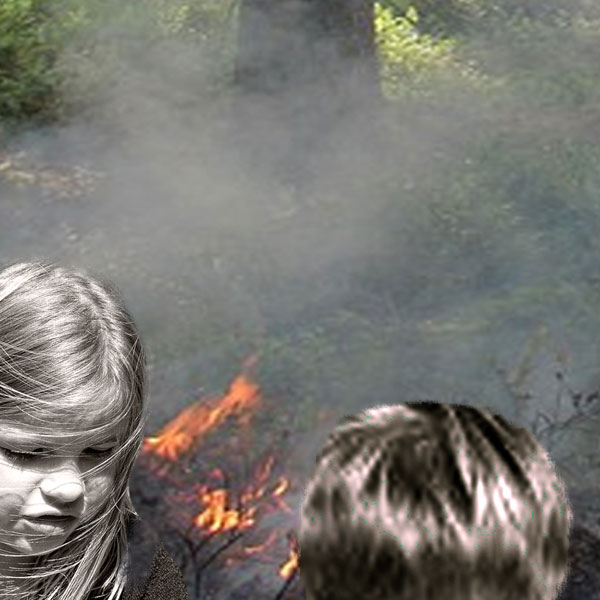 “We will get into trouble now.” The little girl wailed as she wiped her snotty nose and salty tears with the back of her grimy hand. “Dad will be so angry; we have to be with him when we light grass trees, Robert.” She scolded. The dark headed boy with very heavy eyebrows hissed. “Stop crying, I know Uncle Allen will be mad.” He assessed the situation quickly and ordered, “If we use those rusty cans over there we can bring enough water from that creek puddle to put out the flames. “They have little holes in them, the water will run out and we can’t put out the fire like that,” panicked the mousy haired girl. “We need to get Dad.” “Well I am not going to tell Uncle Allen until I have a go at putting it out,” Robert grimaced. “Anyhow the fire will spread right through the Warbies before we can get help.”

The two frightened kids ran back and forth dousing the lively orange flames that were now flickering fast and furiously in the dry winter grass. It had not rained for two years and a searing drought had dried off the land. Usually it was safe to light a grass tree here and there in the Warbies in the winter, as her Dad had always said, “That’s what the Aborigines used to do.”

Suddenly Coral screamed. “It’s heading for the gum tree, Robert.” The fire had gobbled up the meagre grass at the foot of the grass tree and was now racing toward the small eucalypt. She started to panic again as she had been taught how much carnage fires can be in the bush and it was moving up the hill, at a speedy pace. Robert lived in Balwyn a suburb of Melbourne and stayed at the farm in the school holidays. Coral and her siblings reckoned he was a smarty, but their parents referred to him as a city slicker.

“Come on, Coral, move faster, we have to stop it getting up to the leaves as the eucalyptus oil will make it burn faster.” Coral’s sobbing bounced through the skimpy foliage of the Warbies. The smell of acrid smoke insulted their nostrils and burnt their tightened throats. With the threat of a good spanking impending, the two kids worked fast as a team solidly for well over half an hour. “Thank God there is no wind,” wailed Coral.

“I think we have beaten it, Coral”, Robert said breathlessly, streams of charcoal sweat travelled down his earnest face. A black area around the burning grass tree and a singed gum trunk was all that could be seen. “I wonder if Dad saw the smoke,” the frightened girls said softly, not wanting anybody to hear. The dark haired boy searched the track for the familiar green ute. ”I don’t think so, he would have been here by now.”

The two exhausted kids washed themselves roughly in the little creek puddle. “That water must have been a spring,” Robert deduced, “You have had no rain here for a long time.” Coral decided that Robert had saved the day, and was now a country bumpkin and not a city slicker any more.

A couple of days later, John threw his furry, brown rabbits on the wood heap to skin and gut. Robert and Coral were playing marbles in the dirt nearby. “Hey, you two kids,” he demanded, “Have you been lighting fires in the Warbies?” Robert and Coral looked at each other and lied in unison, “No!” “Well, somebody has and boy will they get into trouble if Dad finds out who it was.”