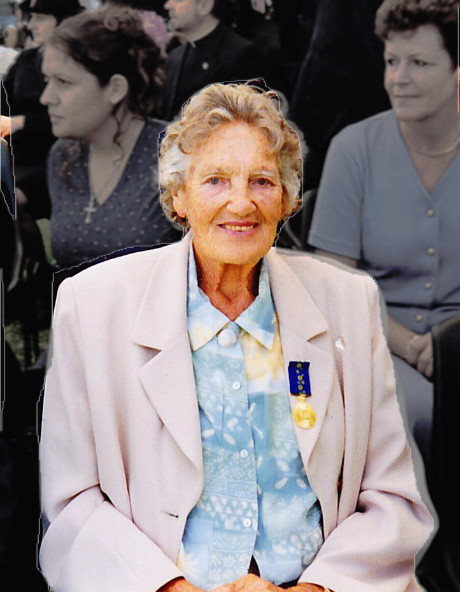 I went to the Sacred Heart Convent School in Bunbury. Well the nuns were so lovely really to be with: they were very strict. I learnt music under Mother Xavier. She always sat at the piano with a ruler in her hand and if you played the slightest wrong note, you’d get a whack across the knuckles for that.

The music room was up on the hill away from the actual school and the convent. Of course we used to have to go up there to practise or have lessons and things like that. If Sister Xavier or Sister Imelda were going down for a cup of afternoon tea, we used to get up to a few high jinks. We’d play all the things on the piano that we weren’t supposed to be playing. Someone would always keep ‘nit’ because you could hear the nuns when they were walking; you could hear their beads rattling. But the nuns caught on to what we were doing and this day they held onto their beads and we didn’t hear them coming. And oh boy did we get into strife that day!

Yes I studied the piano. My brother also studied music and he was a beautiful violinist. In fact he used to give solos at any concerts that were going on. Our school concerts were really something to talk about also. We had an awful lot of talent at the school, and he was a brilliant violinist. They had a very very nice string orchestra belonging to the school and the teacher of the violins and string instruments was called Sister Baptist. Recently I was talking to somebody who had also gone to the Convent School in Bunbury and we were talking about different things, and about the music room, and she said, “Do you remember Sister Baptist and that great big staff?” She had a big stick, big heavy stick and she used to stand there and beat time with it. If anybody got out of time, she’d swing the stick and hit you on the head with it.
But she was loved, like they all were. They all had their little idiosyncrasies; some were lovely and gentle, some were a bit bad tempered, but on the whole you just admired and looked up to the nuns that taught us.

And was I a tomboy ever! I was known as the best fighter in the school. I was always fighting with the boys - not with the girls - I got on very well with the girls. The boys were very bully-ish, or so I thought, and I reckoned that I was the boss and I was always fighting.
I was fighting one boy one day, old “Fatty Hands” as we used to call him and I broke his nose. He lived about 50 yards away from the school so of course he ran home to his mother. His mother came back and I was pulled up to Reverend Mother. I had to hold out my hand and I got six cuts on both hands for being a tomboy and a bully.

I went up to…I got my Junior (I had that for a subject for my Junior Certificate), but with so much practise - for hours and hours I’d be up at the convent - we fortunately lived only one road down, about three or four hundred yards away from the school. I used to be up at the music room at seven o’clock in the morning practising and then I’d go home and have breakfast and then I’d go back to school. At lunchtime you had to go and have half an hour’s practise and the minute that school was over, you were up practising. It was hours and hours of doing nothing else but playing the same piece of music over and over and over again.

I always got very good marks for my music and theory, but once the exams were over, I had such a fill of sitting down playing a piano that I wouldn’t go anywhere near the piano at all. We had a lovely piano in our lounge room in Bunbury in our home. If there was anybody there…I even got to the stage where I wouldn’t go in that room for fear they would ask me to play the piano, and that went on for 12 months or more. Then when I went back to try and play it, I just didn’t have the ability, I could play it, but not like I used to, which was sad really with all that money spent on it and I did nothing with it.