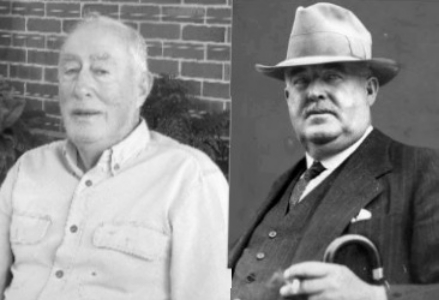 Sir James Mitchell was Lieutenant Governor, he was full Governor but I think the Labor Government, they wanted something up their sleeves so they called him the Lieutenant Governor. Dad and Uncle Willie used to tease Jimmy that he was only the ‘left handed governor’. The Lieutenant Governor, but anyhow he was the Governor for all intents and purposes. It was a tremendous praise from the other side of politics to grab him the job. See he had troubles with the Group Settlement Scheme of course. It wasn’t the success they hoped it would be because no one could foresee the great economic Depression that ruined most people when that came through. Dad and Uncle Willie were great friends with old Sir James and they had been for many years. In about 1940; yes, the war had just begun when he first started to come down; because I was only ten years old when we’d go duck shooting. I’d be sent to be Sir James’s dog; I had to go with him and carry his gun and anything extra (an extra gun or cartridges) and pick up his ducks for him. God it wasn’t a bad job for a ten year old.

Jeffery, a wonderful old bloke looked after Sir James. They’d get shunted off at the siding at Ludlow, near a few nice big trees to give him shade in the afternoons. As soon as the fishing got better at Seaview, he’d tell the engine driver he’d want to go down to Wonnerup the next day. They’d hook on and take him down there and drop him off at Wonnerup. He’d stay there while the ducks were still running and the fish were running. It would be my happy job to have to row Uncle and the Governor around over to fishing spots. I didn’t mind, I was twelve or fourteen; I was grown up a bit by then. I’d row out to the fishing spots with them; but I enjoyed it tremendously the fishing and shooting. The fishing was good because Sir James and Uncle Willie they had friendly arguments all the time about past things that happened, governments and everything. They had tremendous respect for each other and they got on very well together. They had friendly arguments all the time about the idea of what was the better: the horse power or the tractor, mechanised power. They argued about that all the time.

That was an ongoing friendly argument they had because things were only just starting to come good after the Depression. A few would go back to horses that were planting crops, wheat and so it went on. Anyhow I don’t know if the fishing was good or not. I don’t remember catching a hell of a lot of fish but Jimmy seemed to enjoy it. The Governor liked it and Uncle Willie was always happy, I didn’t mind rowing them around – the highlight of my life picking up the ducks for the Governor, he was a wonderful man to us kids. He made a point of making out the kids were the most important people he had to deal with because they were the next generation. If he met someone and their sons he’d say, “Yes, I’ll see you later on,” and he’d concentrate on the young blokes. Jim took his sons to see him and “Yes well I know you, but I don’t know these young fellows.” and he started talking to them. “Now you’ll be sitting in a very important position one day in the running of your state, and you’re not to forget that”. He was a wonderful Western Australian I always thought.

I was old enough to shoot by the time he stopped coming. Yes, I was allowed to go shoot the ducks. I got promoted a bit around that time. From a ten year old just dragging his ducks along for him; I got to the stage where I could take my old single barrel and Sir James would dish out the cartridges and he’d make sure he had the little low-powered cartridge for my old single barrel. I could shoot the wounded ducks for him; the ones he brought down and wanted finishing off. I was allowed to shoot them. He loved shooting and he was such a knowledgeable man. He had an absolutely meticulous knowledge of ballistics. “You know that gun there, you mustn’t use that in your little gun you might hurt yourself.” He’d give him some of those old ones, not black powder, but the weaker cartridges. He had a wonderful array of cartridges that impressed me as a kid. He’d got cartridges from all over the world. Because people used to get visitors from all over the world and they knew he liked shooting and they’d bring him gifts of cartridges. So Jimmy had a great touch with a few cartridge shells.

Well he wasn’t that mobile so we had to put Sir James down and hunt the ducks up to him. He never disappointed; that great big man he had these extra powerful cartridges and big heavy beautiful hammer gun.
It’d usually be a week or ten days between the two places, depending. Lady Mitchell came once or twice because the shady trees were there. The threat of war had gone so everyone was relaxing a bit by then.