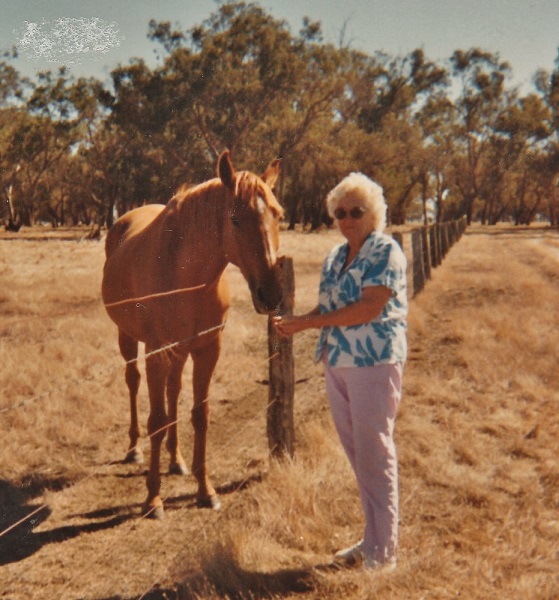 … one day (I was about 12 or 13) Mother said to me,
‘If you go and catch the horses when they come up for a drink we will go for a ride. We might go down to Wonnerup to see my aunt and one thing and another.’
So I took a long rope, used as plough lines, they used to call them years ago, like a horse in a plough, you know. Anyhow, I took it out to the well and when the mare came up to the trough, she had her foal with her, I put the rope around her neck and stood beside her. When she finished (she was a quick little beggar you know), she wheeled around quickly and trotted off away from the trough. She didn’t know that I had the rope around her neck.
I ran with her as far as I could, then my feet got tangled up in the rope and I fell. She pulled me; she pulled me for 284 yards, on my seat … going along! The foal stopped behind at the well and was frightened. She went round a clearing and towards the bush. I kept my legs out straight, whether they were tangled up or not, sliding along the ground; rough ground. When she got to the edge of the bush, the little foal at the well, back behind her, called out to her and she stopped. When she stopped I wriggled my feet and went crazy, you know, to get the rope off my feet. I gradually just about got it off and my mother and father, up at the house, saw what was happening. They ran down and helped me. They had to carry me home … one thing and another. My clothes were all torn and I was all skinned from all the back of my legs and all of my buttocks and right up my back. Yes, my little pants, just gone; worn off from going along like that.
I suffered terribly I can tell you! Mother went in and asked the doctor what to do about it. Dr Yates said to put boracic lint on it. So anyhow, poor old Mother put boracic lint all on me. It was the wrong thing to do. The boracic lint stuck to the gravel rash (that is what it was, gravel rash) but it made it deeper each time. Mother had to take it off every day and she would have to pull it off quickly and I would go ‘right out’ every time she pulled it off because it hurt so but she would have to pull it off like that. I used to dread it; that was it! I was like it for eight weeks and at last new skin grew on me and I came good again … and I have ridden ever since

The livestock sale yard was in Busselton. And we used to drive the cattle there very, very often and sell them … and buy them and bring them back the same way.
But this day, we sold some cattle to Barnards because they had a shop in Busselton at the time at the Commercial Hotel, on the NE corner of Queen and Albert Streets. The shop and the Commercial all belonged to Barnards.
We sold these cattle to them and my brother and I we took them to Busselton. I was on my mare–my horse–and he was on a bike. And when they got in, over the church bridge, they got frightened. The town looked pretty mad you know to them and we tried to drive them down to the paddock where we had to put them in, which was the other side of the old Butter Factory. They stampeded, and they went for their lives down the main street, slipping and sliding (although the street then was not as it is now), but they were frightened and they just went everywhere you know.
I tried to turn the mare quickly to turn them round into the street we wanted them to go, and she fell in the middle of the street. I got up and my leg was hurt a little bit but it wasn’t bad. And anyhow, Alan Barnard, one of the men from the Commercial Hotel, he came over and said, ‘Oh, give me your horse and I’ll get them in quick and lively.’
So, anyhow he got on my mare and he couldn’t ride her; she wouldn’t shift for him. She just would not go! So I said ‘Give me her; I’ll ride her.’ And I rode her, and Tom and I we got the cattle round, right round past the Post Office, and right up to the old Butter Factory, and eventually we got them in the paddock we had to get them in.