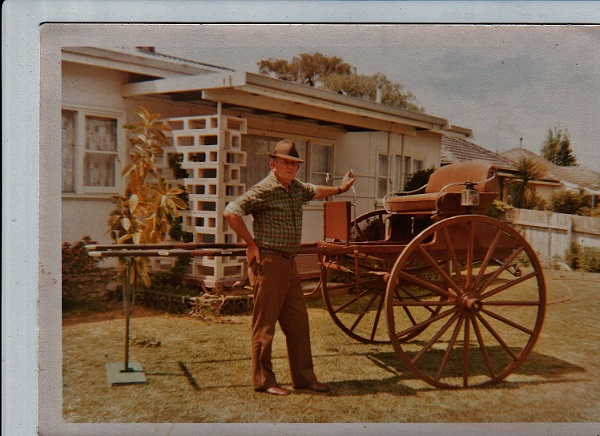 Mostly old Bill Fish was a professional market gardener in England and he was in Nannup too for that matter. They had two kids; young Bill, he went to the war, and the girl used to go to school with us. We used to go in the sulky most of the time. Young Bill of course he was invalided back from England and he was very, very sick for quite a while; didn’t do anything at all of course.
Lily of course, she and I were very, very close because there was only a year between us and we grew up together. We were great mates, although we used to fight like mad of course like all kids do. And young Bill, he started to get better
Anyhow on the 12th April, 1919, on a Saturday morning, Bill and I, we went into Busselton. We must have went fairly early I think, in their vehicle, whatever it was at the time, a sulky I suppose, ‘cause we had our other sulky at home.
Anyway, we went to town, and about … it was about eight o’clock. Mum and Dad were down milking the cows down at the shed, which was about 50 or 75 yards I suppose from the house. Evidently they’d left, Mum had left, a basin of milk on the stove, for breakfast. Lily was at home and she was in bed of course at home, at the house. I don’t know about the other two kids, where they were. Evidently the milk boiled over and Lily went to take it off the stove and she had this bangle on - just a celluloid bangle on her wrist - and evidently it caught fire and she went up in flames. She ran through the house screaming: all over the house yelling.
Anyway they came up from the shed, and she was well alight. All her hair had gone and she was running from one room to another. They got her and put the fire out; got the horse and sulky. Mrs Fish was there in the next house, and they come over and they put oil all over her body. They took her, got the sulky out and got the horse, Mum and the old man, into the hospital in Busselton-full gallop all the way there- eight miles-bad road.
We didn’t know until we met them in town. Course there wasn’t many people about in those days, and I met Dad in the street; Mum was down at the hospital. Anyhow I went down to see her after he told me what had happened. Went down to the hospital and I went in. She was there all in her bandages and all her hair had gone; bandaged all over. I tried to talk to her but she said, “I wish I was home instead of being here in this agony”. And she opened her eyes for a while, and closed them, and she was gone.
Mum gave me ten bob. She said “Would you go out to the local shop, up there in Prince Street and get a nightie. We can’t bury her in that old nightie of mine that she’s got on.” In those days, the funeral/burial was always the next day. Anyhow I don’t know where Mum got that ten bob from. For a start she never had any money. I never knew my mother to have any money at all. I never even knew her to have a new dress. My father was a womaniser and although he always had some money, we never had any and she never had any. Anyhow, next we had the funeral on the Sunday (well it happened on the Saturday). The funeral was held on Sunday - up to the old cemetery here in Busselton … I think it would have been one of the last of the horse drawn hearses.

I didn’t go to school on the Monday. Mum come and asked me, and she said, “Would you go and pick up some of her poor burnt skin in those rooms”; And I was picking up big pieces of her skin in an old bucket and taking them out and burying them under a persimmon tree down the back.

Fire
tragedy
up
528 users have voted.