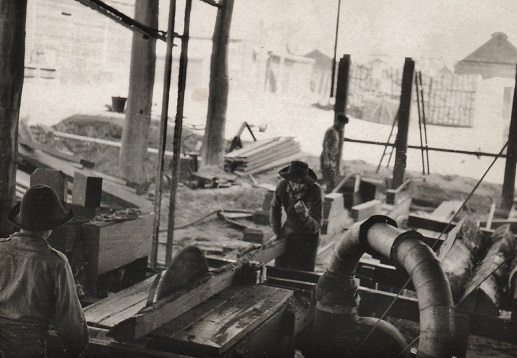 My earliest memories as a child, it would have been about probably going back to about three, well a bit over three I think, when the mill burnt down, was one of ‘em. Cos, I remember that, we were standing on the verandah of our house, that overlooked the mill. I could actually feel the heat of that.
But from then on, til I was about seven, I can’t remember too much, what we done. After that, well I really had a full on life. I used to set, just for something to do, I used to set about forty rabbit traps in the morning and at night. I also helped a bloke that had a little farm at Jarrahwood. His name was Tom Jennings, and my job with Tom was to go and light the copper straight after school, to have hot water. And then I’d help him milk, and then, after that I used to deliver milk to people. But I couldn’t carry the big cans, so he built a little trolley for me, a little wheelbarrow. Well, it wasn’t really hand milking, but more times than anything we’d did have to, cos the old motor wouldn’t start or something always went wrong, but halfway through milking I’d leave to actually deliver milk around Jarrahwood. And the people would leave their little billy-can out, with a note there to say whether they wanted half a pint, or a pint. Anyway, I got the job of doing that. The people always reckoned that I was the best at it, because I used to give them more than old Tom did. Old Tom did, if they wanted half, he’d give them half, but I’d always give them a little bit more. Then, in the different times, I’d leave home in the morning at about 5 o’clock, I’d check my rabbit traps, come back home, skin ‘em. And then have to go to school, then after school, I’d go back down to Tom, and do the fire as I said, and help him milk, and deliver the milk. And then in the morning I’d do the same thing again … no, at night, actually before I went to bed, I used to ride out to the Jarrahwood Forestry to check my rabbit traps and reset them all again for the next morning.
The farm, of Tom Jennings, was only just across the railway line from the mill, so it was only probably a few hundred yards from where I lived. Jarrahwood, at those days, was quite a big place. I wouldn’t know how many people lived there, but it used to take quite a bit of time to go around it. Cos, with the rabbits, I used to ride, oh, anywhere to six miles on my pushbike, to get these rabbits, and that. And then I used to sell the rabbits to ... I’m not really sure who the company was, but I’m 100% sure, well 90% sure it was Watsonia, or Diamond Eye. There was but two of them that used to do it. They’d give me two bob a pair, and then they’d probably sell them for five bob a pair or something. And then in the later days, I done the skins, and used to have to so the rabbit a little bit better to keep the skins. But it was done on a wire, like the shape of a horseshoe. And you’d turn the skin inside out, hang them up on a wall, or a clothesline, whatever we could get, and let them dry. And that was the only thing we did with a rabbit skin.

Cos in between that, too, on a Sunday, I used to do the Sunday Times paper run at Jarrahwood. The Sunday Times would come through at 6 o’clock, drop the papers off, down on the road, and I used to pick the papers up and deliver them around Jarrahwood. I used to get a little bit of pocket money from it, with people that used to give me a little bit of a tip here and there, but it wasn’t very often. I don’t know what I actually done with the money. I used to keep it, but I never used to see much of it. I think my mother and them used to use it to buy different things. Cos in them days it was pretty tight, and I didn’t mind.

But when I worked for old Tom Jennings, my pay down there wasn’t really paid – because he used to … if I wanted milk, well I got milk or cream. Then if we wanted butter, he’d get the butter for us from Watsonia, cos they’d come through all the time picking the cream up and milk and different stuff. At Xmas time he’d always give me a leg of ham, and always have the big blocks of cheese or butter – whatever we wanted. I used to get paid like that. Skinning rabbits and that, I don’t really know, I think a lot of it I’d probably spend on rubbish at the shop. But we used to sell a lot of stuff as kids; Boronia, as kids in the Boronia season. Cos the main road used to, at Jarrahwood, used to come right past the mill, years ago, come straight through Jarrahwood.

I left Jarrahwood at probably eleven or twelve. I went to Nannup, cos my parents went to Nannup to live, so I went to Nannup school for, not really sure how long I would have been at school, probably twelve months in Nannup. I went to Grade … well, which is first year high; I done that at Nannup school, and then the day I turned fourteen, I went back to school for one or two days in Nannup and then left, and that was when I turned fourteen on 11 Feb, and I left there then, and got a job, down in what they called then, the pre-cut in Nannup. So that was the end of the schooling days.

I had a very good relationship with my father. He had a license to sell kangaroo skins, and every Friday and Saturday mornings, I’d be up at 4 o’clock getting ready to go. I’d follow him around the bush for hours. We’d get probably 10 to 15 kangaroos and my father never carried a rifle. He had two kangaroo dogs, and if the kangaroo was too big for them to kill, they’d bail it up. My father had a spear. It was a big 15 foot pole, with a sharp point on the end of it, and he’d sneak up behind a tree, and try to spear them with this spear. And I remember on one occasion, he said, he yelled out to me, “Run, and climb the nearest tree.” Cos the kangaroo got the spear in him, but he did not like it, and he come charging at my father, and it was only that the kangaroo dogs realized this and both of them flew the kangaroo and brought him down. Otherwise, I really don’t know what would have happened. And to be so far away from home, to find by way back, I wouldn’t have known …I’d, well I would have, come to that ... but it wasn’t really good. And a few occasions, the dogs would take off and we’d be sitting there waiting for them to bark or come back. On this occasion, my dad said to me, “Quick, find a tree,” he said, “Here come the dogs!” and right behind them were two emus. The dogs must have chased the chicks and the emus didn’t like that and were heading back at us. And the dogs being loyal, come straight back to their owner.

We did eat a fair bit of kangaroo in the days. Cos meat was pretty hard to get then, out at Jarrahwood. Well it wasn’t probably hard to get, it was dear; when he wasn’t earning big money at saw-filing, or working at any timber mill then.

He had an old wooden barrel, which was the old wine barrels in them days. And we’d actually, as kids, we’d be sent off to go into the bush and find red gum off of the red gum trees, or the marri, these days. We’d collect that into buckets, take it back home. My father ‘d boil it, to get it down to a paste. Then pour it into water, and then soak the kangaroo skins into that, then take them out and hang them on a shed wall until they dried. And that actually tanned them, gives them the tan.