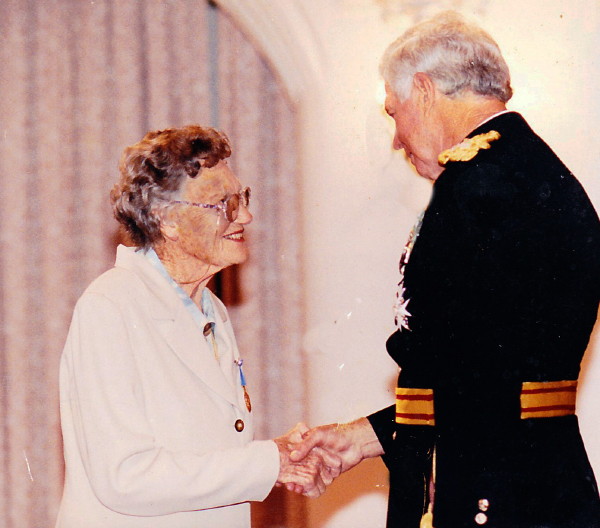 One of the highlights of our branch of course was our entertainment group which we formed. When they used to have, say, the Christmas parties from the different branches or the division and that and had to put on an item from each branch.

The beginning of ours was when we used to run the concerts in the Dunsborough Hall. We used to make a stage out of cool drink cases and Doug had piping that used to make the framing around the stage. Then we would all strip our beds and have the back drops and curtains and things like that made out of the sheets off your bed.

And we formed this little miming group actually and we called ourselves the Dunny Gees. That included Hilda, Flo, Joanie and myself, I was in it. And we performed at this concert and of course it was an absolute riot, so much so that we got three bookings out of it. It was Diane’s 21st birthday and they had it at the Esplanade Hotel and the Dunny Gees were the entertainment for the night. It went over like a bomb.

I had two guitars made out of cardboard, and I had two hat boxes, (the old fashioned hat boxes), and we turned those into drums. One of the girls had an old washing board and I had Frank’s trumpet. So there were two guitars, a trumpet a washing board and a set of drums; that was the orchestra. I was the idiot that pranced around and put the trumpet to my mouth but didn’t pull the things to make it sound of course. We were dressed in old jeans and things like that. That’s why we were called the Dunny Gees.
Our songs were the Beatles and we mimed three of their numbers. We had the records; we didn’t have tapes then.

We also did it in Capel. We went to a function in Capel and did it there. We were well known, the Dunny Gees. We did it twice in the Dunsborough Hall; once at the concert and another time we did it for one of the cabarets. We used to have those four times a year. Every long weekend, we had a cabaret in the Hall. We didn’t do it but the Progress Association ran them and they cleared the Hall debt which was pretty substantial in those days. It sort of got them out of the red into the blue.
Joanie and myself, we did a couple of little skits. Then Lil, she was very clever with her hands and ideas. I was the chappie that ran the doll: she stood up in this big box and she’d made all the legs and arms and things like that, and she dressed herself up as a dummy. That was another act that we did. We did that at a couple of places. We had a lot of fun doing those sort of things. It gradually dwindled off as Lil left the area and Joanie wouldn’t be in it any more. Hilda was okay but even so, her legs were starting to give away on her, but we did have a lot of fun out of that.

When the Progress Association finally got in the blue, and we were not chasing the money, we decided that possibly the CWA could put on some of these items at various concerts or various functions for fund raising for CWA.

We went to the Karridale Hall, we went to Margaret River to the old hall and we also put it on at the Margaret River new hall, when they built the new one (not for the opening of course).

CWA had a thing where they used to have all these gala days or international days or really ‘gathering together’; fund raising things. Each branch was asked to put on an item and of course seeing as we were more or less well and truly established, this is what we did. We repeated some of the items that we used to put on elsewhere. We did it a couple of times in the Dunsborough Hall and of course the first one was the concert. Then of course we did it again for one of the cabarets. It really was good fun with the make-do instruments we had. It was a farce but it was very amusing and very, very popular.

CWA
Dance
up
338 users have voted.